The show continues, but COVID and Trump are not relevant yet

FRS Changes Policy for Economic Recovery; Japan is waiting for a new prime minister; Trump continues the rating war. Large speculators are returning to the markets.

Let us recall the important events that the markets «pleased» us with at the end of last week:

The head of the FED announced a change in priorities and adjustments to the goals of the Fed's dual mandate on inflation and employment. Now the FED will focus on achieving maximum employment above the inflation target, that is, it assumes that the growth of the labour market may not be accompanied by an increase in inflation. FRS will aim to achieve stable inflation at 2.0% and will moderately exceed this level for some time. Inflation growth slightly above 2.0% is quite real in the next 1.5-2 years, while the 2.5% level is unlikely.

The announced changes to monetary targets do not require congressional approval. However, if the FED makes a mistake and allows an uncontrolled rise in inflation, then the most negative scenario may be the abolition of the FRS and the adoption of decisions on monetary policy based on mathematical formulas. By the way, many Republicans have been actively advocating this for a long time.

The speculation before and after Powell's speech was short-lived; markets were disappointed by the lack of tools to control the US GKO yield curve. Experts suggest that the Fed's new inflation strategy will be formulated at a meeting on September 16 in the form of guarantees to keep rates at current levels with the launch of the «traditional» QE program.

Shinzo Abe's resignation traditionally strengthened the yen: investors closed a large volume of carry trade positions, actively sold shares and bought liquid government bonds. The country remains a netto-exporter of capital, which, in any danger or conflict, Japanese investors return to their homeland and convert into yen.

The ruling Liberal Democratic Party has officially confirmed the leader's resignation. The talented politician has worked in a key post for the economy for more than 2799 days − this is the longest (post-World War Two) period among Japanese prime ministers. The insider about the resignation of the Prime Minister for health reasons has been periodically appearing for more than a year, but the current moment is especially dangerous − now there is no certainty that Japan will be ready to take the most radical measures to avoid strengthening its currency.

The speculative volatility of the yen has already hit all types of markets, as the exchange rate of any assets involving the yen is too dependent on the coordination of the government's fiscal policy and the monetary measures of the BOJ. Now big business fears that Abe's successors may put pressure on the monetary regulator to stop the reform process and abandon the symbiosis of aggressive monetary and fiscal stimuli dubbed Abenomics.

There is no exact date for voting on the new prime minister yet. Liberals and their allies control the majority in both houses of parliament, and so far the most likely candidate is the former Japanese Defense Minister Shigeru Ishiba. Abe's policy of supporting the stock market rally and keeping the yen from excessive growth is likely to continue. The term of office of the head of BOJ Kuroda ends in April 2023, and it is highly unlikely that the regulator will adjust its policy in the coming months.

Negative insiders continue to come out on the subject of the London-Brussels talks. Germany said that in the absence of progress in the next two weeks, negotiations would be deemed useless, as there would be no time left to agree with subsequent ratification. It seems that market participants are not interested in the negative consequences of Brexit and the lack of a trade deal. BOE chief Bailey said negative rates continue to be in the arsenal of monetary regulation, and traders continue to ignore the fact that the economic situation in the UK is not much better than in the United States. So the pound continued to rise and does not intend to reverse without additional negative foundation.

The Gulf of Mexico survived Hurricanes Marco and Laura without significant damage to infrastructure. Oil refineries have escaped significant damage and have already begun the process of restarting production. The Port of Houston is open and plans to return to normal capacity in 2-3 days.

The civil war in Libya is gradually drawing Egypt, France, Turkey, the United Arab Emirates and Russia into the conflict. Investors doubt that the EU or the US will be able to calm the situation, and are actively withdrawing capital from the most affected territories. The depreciation of the dollar and general appetite for risk help the main oil benchmarks to hold on to their highs, but the lack of growth in oil demand due to the second wave of the pandemic is holding back active buyers. Strong demand forecasts for raw materials remain negative.

Events this week will have a serious impact on the rhetoric and decisions during the meetings of the ECB (September 10) and the FED (September 16).

Nonfarm Payrolls could be a decisive factor for the announcement of new incentives from the Fed. Strong data will support the view on the need to postpone the decision to launch new monetary stimulus until the end of the year. If the report is weak, and the return of large capital to the markets will lead to the fixation of profits on US stock assets, the FED may change its mind.

ISM and ADP reports will adjust market expectations for the quality of NFP indicators. The market will show the first reaction on the data on the number of new jobs, but the unemployment rate is more important given the new Fed's tactics. If the unemployment rate rises, then the dollar will be under downward pressure, at least until the ECB meeting.

In addition to NFP, pay attention to the statistics:

This week, the FRS officials have the last opportunity for manipulation before the beginning of the «period of silence». The most important comments are expected on Friday after the publication of the NFP.

The ECB, which is worried about the growth of the euro, is not yet ready for decisive action, similar to the Fed's policy, but can announce not only a change in the inflation target but also a change in the inflation rate. The rhetoric of the ECB will be more optimistic if the Eurozone PMI data is revised downwards and inflation continues to fall. The ECB is still looking for an answer to the Fed's new strategy and from Thursday also begins a «week of silence» before its summit.

On Wednesday, it is worth paying attention to Michel Barnier's speech, as well as the banking summit in Frankfurt with the participation of German Finance Minister Olaf Scholz, heads of Deutsche Bank AG, UBS Group AG and other representatives of European finance. 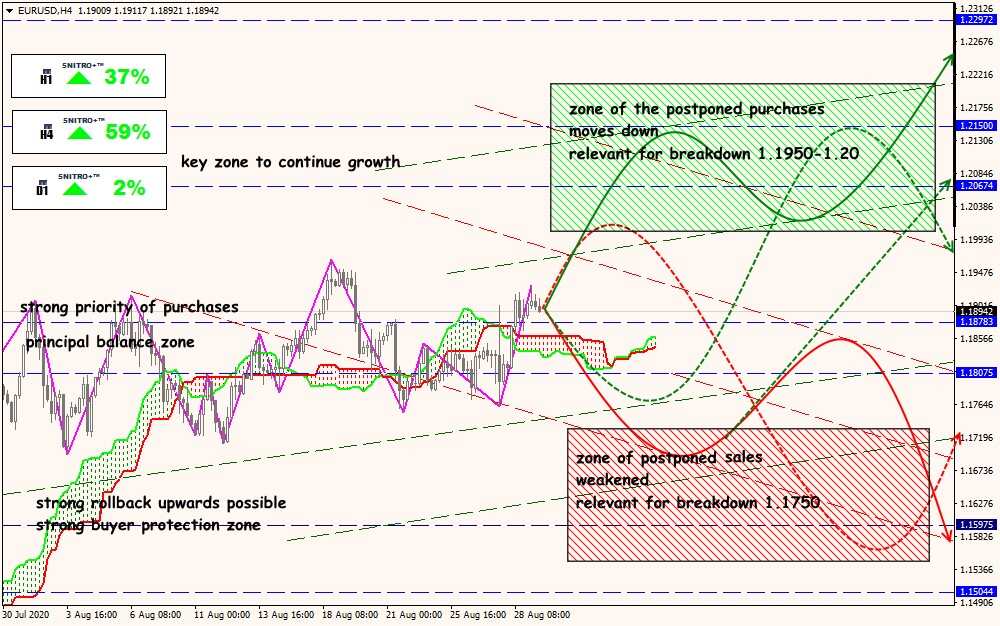