The market in a sleep mode: judgments, doubts and disappointments

Trump with pleasure got tangled in the next scandal. But the markets did not see the active movement.

The opening of the year was negative for a dollar because of fears on fixation of profits in the stock market of the USA, last week the market was inclined to sluggish technical movement, exclusively fundamental analysis directed actions of investors.

The last protocol of FOMC looks more unstable than strongly disappointed both speculators and analysts. Correction of periods of change of rates is possible if as a result of tax reform signs of an acceleration of inflation against the background of the further growth of labor market appear. In case of inflation below the target objective (2%), perhaps more modest increase in rates. Considering the fact that investors actively sold dollar after 13 December without the of the sufficient bases (decline of dollar amplified during the press conference of Yellen) − all negative was considered by dollar earlier. At last greenbacks received the fundamental reason for restoration, the current correction can represent favorable levels of purchase. Increase in rates is planned three times in the first three quarters of the current year that is also favorable for the growth of dollar.

Reaction to a negative of NFP was not so dramatic as it was possible to assume. Only weak short-term falling is recorded that reflects indifference of investors to an economic situation in the USA. Unemployment remained at the level of 4.1% − the lowest level since December 2000; reduction of number employees in the sphere of retail trade during holiday sales looks especially illogical.

The whole week dollar was dumped on faultless statistics, as a result, have obviously gone too far in sales, and fixing of profit on NFP has allowed closing large volumes of short without loss of the general trend.

Gary Cohn has said after the publication that the number of jobs lower than 200K is not acceptable for Trump's administration, and tax reform just has to lead to the growth of salaries. The bureau of employment of the USA is going to replace a method of calculation of indicators in February, but old data won't be corrected, that is figures for January can't be compared to last data. Change of a technique, most likely, will show "growth" of the labor market of the USA before intermediate congressional elections, but will obviously not correspond to a real picture, therefore, trust to them - minimum.

Negotiations between the block of CDU/CSU of Merkel and SDP party of Schultz are open and will proceed 5 days: while a debate is held by parties separately, the general debate is planned for the second half of Thursday. On Friday conclusions on the prospects of formation of the grand coalition have to be presented. Only conditions of the coalition agreement depend on the subsequent negotiations. Most likely, for the general result, Merkel shall have to give to Schultz a post of the Minister of Finance.

Anyway, the coalition agreement is unlikely before February. If Merkel agrees with plans of creation of the uniform budget and the Ministry of Finance of the EU, then the sure positive of euro is provided; but it is worth expecting strong correction following the results of parliamentary elections of Italy on March 4.

The press conference following the results of negotiations isn't expected, only the publication of the statement, but information leakage will be sure. In case of a positive − euro will rise, at the slightest negative - will sharply fall.

Probably, high data of PMI of China and persistent, but incomprehensible attempts of interventions with the purpose to increase yuan exchange rate against the dollar were only "surprise" of last week. And also the market is nervous because of large volumes of purchases of euro by Asian players, including − through option contracts. Taking into account the dollar credits of the Chinese companies Celestial Empire accelerates the movement of the economy to a non-return point.

Current week inflation of the prices of customers and retails will be a specification across the USA; on the Eurozone − unemployment rate, trade balance and annual GDP of Germany. It is worth paying attention to information on the purchase of assets by the ECB within the QE program (today); we wait for "insider" after the intermediate meeting of the ECB on Tuesday and publications of the protocol of the ECB on Thursday. A good occasion to correct euro down.

Many performances of members of FRS are expected, but the speech of the head of FRB of New York Dudley is the most noteworthy (on Thursday). The subject of a performance does not concern a monetary policy, the patriarch of financial branch intends to retire in the middle of the year, but it means that he can`t be afraid to give an adequate assessment to perspectives of a policy of FRS. 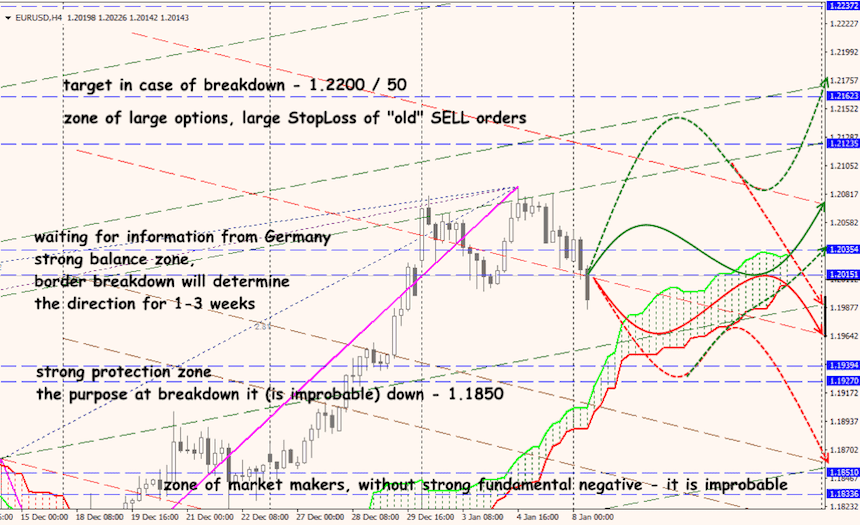