The market as a theater: «Chippolino» coalition and Big Brother

The situation in Italy is close to an outcome; a rendezvous of the USA-DPRK under the threat of failure; OPEC monitoring committee prepares for correction of the oil agreement.

We wait for active drivers from OPEC, FRS, China and a situation with Brexit.

The Italian eurosceptics continue to press on the European market. Last week information leakage about the agreement of «5 stars» + North League has led to panic and a sale of the Italian assets that gives to euro the next incentive to falling. The new Italian coalition has offered the program «stimulating» capital outflow from the country: revision of fiscal rules of the EU, cancellation of sanctions against Russia, decrease in a rate of a corporate tax on 20% to 15%, cancellation of the VAT and growth of excises. All this leads to expansion of budget deficit and growth of a national debt which part (€250 billion) Rome suggests to ECB «to forgive».

Yes, the ECB once bought up the Italian state papers within euroQE and now the coalition hints that it won't repay them. In case of the positive decision, the precedent which other problem members of the EU will surely use will be created.

The final draft agreement won't contain intentions about an exit of Italy from the Eurozone and refusal of euro, but it contains the following items:

The name of the prime minister has to be announced following the results of today's meeting of leaders of parties with the president of Italy. Everything has to come to the end finally at the summit of leaders of the EU on 28-29 June and till this moment euro, most likely, will remain under pressure. Crisis in Italy hasn't affected market expectations on normalization of the policy of the ECB yet, investors expect the first increase in a deposit rate of the ECB for 0,10% in June 2019.

Following painful point: OPEC. In general, the cartel has got rid of the excess offer; conditions in the world market continue to become tougher; geopolitical factors and Trump's decision to leave the nuclear agreement with Iran have provided to the prices three-year maxima. Considering a situation, experts believe that the OPEC won't extend the agreement validity the next year – it will be solved at a meeting in June, but it is worth listening and analyzing information already today.

In the Wednesday the protocol of FRS will be published, the main attention for discussion on perspectives of growth of economy and inflation. At the moment there are no fears concerning deceleration of growth of the economy of the USA, GDP in 1 quarter traditionally feeble because of weather conditions. It is expected that the rhetoric of the protocol will be directed to lowering of market waitings on an acceleration of the time of increase in rates in case of achievement of the goal on inflation in 2%; discussions on toughening of financial conditions will be negative for the dollar. The response of the market will be short-time and depends on the general situation.

The general output on trade negotiations China-USA at the moment: the sides do not plan the active offensive actions. China is ready to modify a row of legal statuses to strengthen cooperation with the USA in the sphere of intellectual property; the understanding in a question of abbreviation of a trade deficit is reached. Beijing is ready to increase the volume of the American goods and services of the USA, in particular, of agricultural production and energy carriers. On Saturday, Mnuchin and Trump's adviser on economic issues Kudlow said that China and the United States managed to agree on principles of eliminating trade imbalances, but details of the deal are not disclosed.

However, a relationship out of official negotiations continues to develop not for the advantage of the USA. China increases alternative settlements for oil in yuans: with such rates, Chinese «friends» will tear off up to 10% of a turn of oil futures from the USA until the end of the year. Yuan in the next 1-2 years can take the third place in the world on the application in trade settlements.

Trump needs at least one large victory before congressional elections, and the nuclear agreement with North Korea is planned as that. In trade war with China, this factor is the effective weapon of Asians. Geopolitical tension in the region will decrease to Trump's meeting with Kim Jong-un. There is no important statistics on China current week.

Europe distracts the market from failures of international policy of Trump so far: on one of his initiatives has progress, the summit with Kim Jong-un under the threat of failure because of military exercises of Seoul and the USA, a deadline for renewal of NAFTA will be missed, the escapade with transfer of the American Embassy made active all parties of the Middle Eastern conflict.

Inadequate attempts of pressure and inappropriate advice of Trump irritate the European and, especially, German officials, involving them in unsystematic hassle around higher tariffs, tougher sanctions and mutual distrust. At the summit in Sofia leaders of the EU made active the so-called blocking statute to protect the European companies from consequences of sanctions of the USA against Iran. Especially as Greece which is ready to fight for the following volume of the help in the amount of about €12 billion steps on the stage again. The country seeks to receive write-off of a part of a debt and to return to the international financial markets. Versions of the agreement will be presented on 24 May at a meeting of Ministers of Finance of the countries of the eurozone.

Last week has practically not affected pound, the current week the British currency waits for news on Brexit, in particular, of the final decision of the Cabinet of Ministers of Britain concerning the Customs union with the EU. Carney will submit the inflationary report in parliament on Tuesday; the pound can develop the ascending correction upon the publication of economic data: the report on inflation, GDP for 1 quarter and on retails.

We pay attention to statistics of the USA on the sector of the real estate and a research of moods of consumers according to Michigan; on the Eurozone − PMI of the industry and services and also the IFO index of Germany. It is worth listening to Powell's performance on Friday at 15:20 (CET); subject − financial stability and transparency of FRS. Understanding told and the reaction is expected next week. 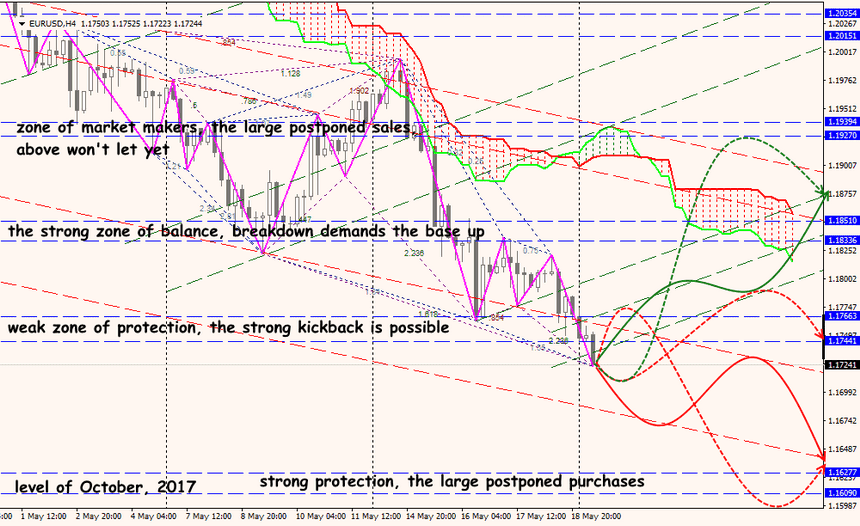 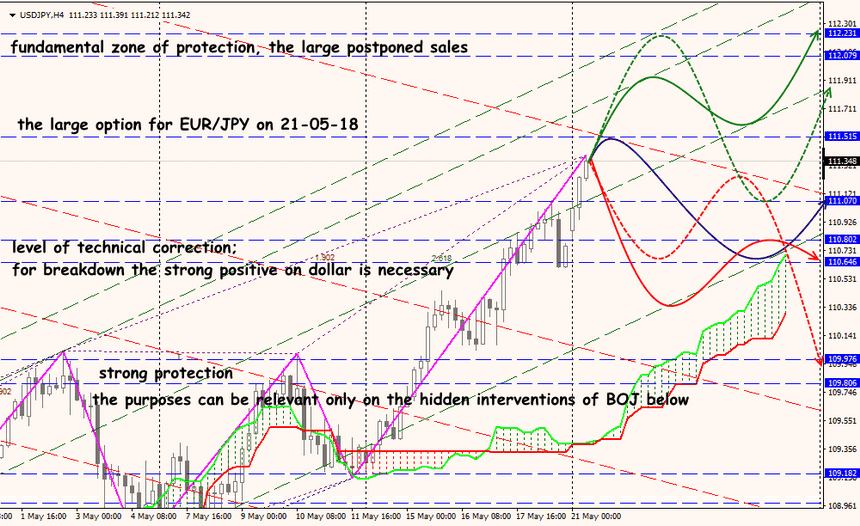