The Art of trade War: no end of losses, victimsare not uncountable

Tariffs remain the main subject: Trump opens the new front, and Brexit − the pre-election auction. Oil falls, S&P500 lost about 6% in a month, but there are problems more important.

Practically with equal probability, the meeting on 6 June can be either «empty», or declare a new package of incentives for maintenance of growth of economy and inflation. The decrease in forecasts for GDP growth of the Eurozone for 2020-2021 (adversely for euro) and details of new TLTRO-3 is expected. The wording of the decision completely depends on whether leaders of the EU decided on the successor of Draghi after elections in the European Parliament.

At the summit on 28 May, Merkel and Macron dispersed both in the principles of appointment, and in personal characteristics of candidates, therefore, the group of negotiators from three coalition parties of European Parliament was created which has to find the solution to the summit of leaders of the EU on 20 June. Until clarities with the successor, serious decisions on the general policy of the ECB are improbable, the rhetorician Draghi will remain invariable, fluctuations of euro will be short-term.

Aggravation of a situation is connected with the growth of rating of Salvini party as a result of elections to European Parliament strengthening of disagreements with the partner in ruling coalition by Dee Mayo's party «5 stars».

Split is complicated by the requirement of adjustment of the budget: on 5 June the European Commission will consider penalties which result will be a requirement about the introduction of a deposit by the government of Italy of 0.2% of GDP or €3.5 billion. In case of refusal, Italy can be excluded from all investment projects of the EU and is deprived of access to the benefits of the ECB – sharp decline of euro is provided.

In case of the development of the conflict, early elections to parliament are not excluded − Salvini will not want to miss the chance to receive the prime minister's post.

During the summit leaders of the EU confirmed the decision on the impossibility of introduction of amendments to the agreement of Brexit. Germany is ready to veto the next extension of Article 50 about an exit of Britain from the EU after 31 October if London «asks» something again. The new referendum or early elections to the parliament of Britain can be a reason for a delay.

You should not wait for progress in a subject in the closest weeks, the Tory are busy with the fight for the prime minister's chair, but Trump's visit to Britain on 3-5 June can lead to an escalation of a situation. Trump already «advised» Britain not to pay $50 billion compensation for an exit from the EU, («debts are paid only by fools») and during the probable meeting with Johnson both figures can make provocative remarks concerning negotiations with the EU.

We pay attention to PMI of the industry and services of Britain, in case of growth of indexes the positive for pound will be short, but when falling lower than 50 points the negative will considerably amplify.

We estimate the report in terms of its influence on the change of policy of FRS: in case of weak data, the hint on the decrease in rates can be sounded at a meeting on June 19. The reaction of dollar to the growth of salaries is possible only in case of faultless figures – increase on 3.4%yy or above guarantees a strong impulse.

If statistics of «the first echelon» is better than the forecast, market expectations on a decrease in a rate of FRS will change before the publication NFP and reaction to the report will be weak.

If preliminary data are weak, then the growth of the dollar will be short-term, it is logical to look narrowly at sales.

«The White Book» on the trade conflict with the USA is published in which the lack of readiness for concessions on fundamental issues is emphasized, though leaves chance for negotiations. Beijing will never yield to the requirements of the United States and will not abandon the planned economy. The demands for structural changes in the Chinese economy were considered unacceptable for the «key interests» of China.

War will be long and cruel. Investigation concerning FedEx Corp (the American post company) in response to sanctions against Huawei is already opened. Beijing suspended the purchase of the American soy and switched to deliveries from Brazil − it is direct stroke to Trump: he won last elections in 8 of 10 states the Midwest, the largest producers of soybeans. Restrictions in the sphere of supply of rare-earth metals for the American companies are planned to be introduced since June 10-15. The Central Bank of China holds yuan exchange rate stable, being afraid of capital outflow, but the support of readiness for negotiations at Trump and Xi Jinping's meeting on a G20 summit is more probable on June 28-29. We pay attention to data of PMI on Wednesday.

The anti-Iranian sanctions force Europe and India to develop a system for trade with Tehran bypassing the dollar. The alternative is similar to the European INSTEX which is used only for transactions with the Iranian oil. The reaction of the USA to this fact is late and is not original. On 31 May Trump said that since 5 June the States can deprive India of the status of the emerging economy that will exclude a possibility of duty-free export to the USA more than 2000 Indian goods. Analysts so far understood little, but Asian stock indexes already failed. Following the results of Friday, the yield on 10-year bonds of the U.S. Treasury fell to the maximum size since 2014.

Trump's statement for an increase since 10 June in duties on import of goods from Mexico for 5% with the subsequent increase up to 25% shows senselessness of any negotiations with the present leadership of the USA. Fight for the trade pact of USMCA between the USA, Canada and Mexico continued more than a year, Mexico and Canada made serious concessions, but if Donnie does not like migrants, then it is impossible to stop it.

Negotiations of the USA and Canada on border control will begin on Wednesday, but Mexico estimates chances settlement of problems insignificant.

The ascending correction on oil before Trump and Xi Jinping's meeting on a G20 summit on 28-29June is possible.

Next week the silence period before a meeting on 19 June will begin,so it is a high time for figures from FRS to become more active. Tomorrow Powell will talk in Chicago with the speech about a topic of monetary policy, the head of FRB of New York Williams will make a speech at a conference in New York, but we wait for the main comments after NFP. Leakage of the insider before a meeting of the ECB is on Wednesday evening obligatory.

Draghi together with Kerr will attend the summit of Ministers of Finance of the G7 on Friday-Saturday, additional comments are possible. In the Eurozone, there is no positive, but the negative is in many respects already considered by the market, only aggravation of trade war of the USA and the EU can provoke the decline of eurodollar. 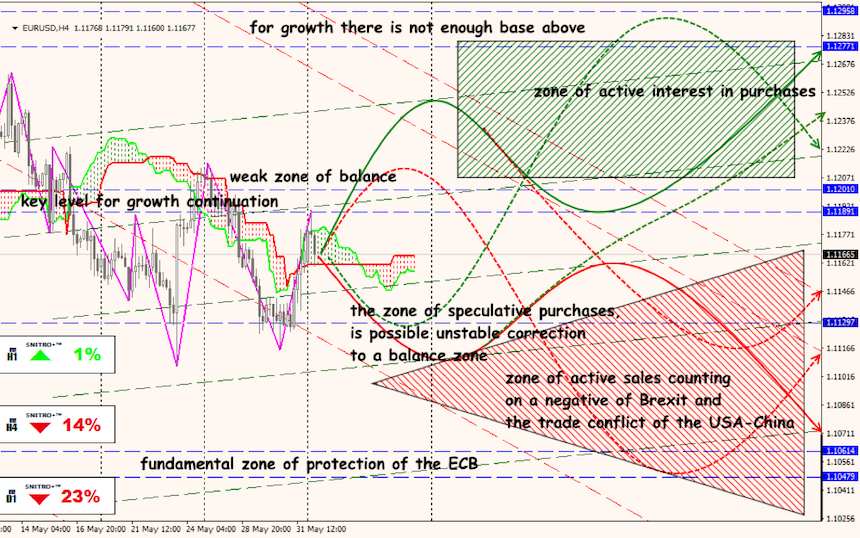 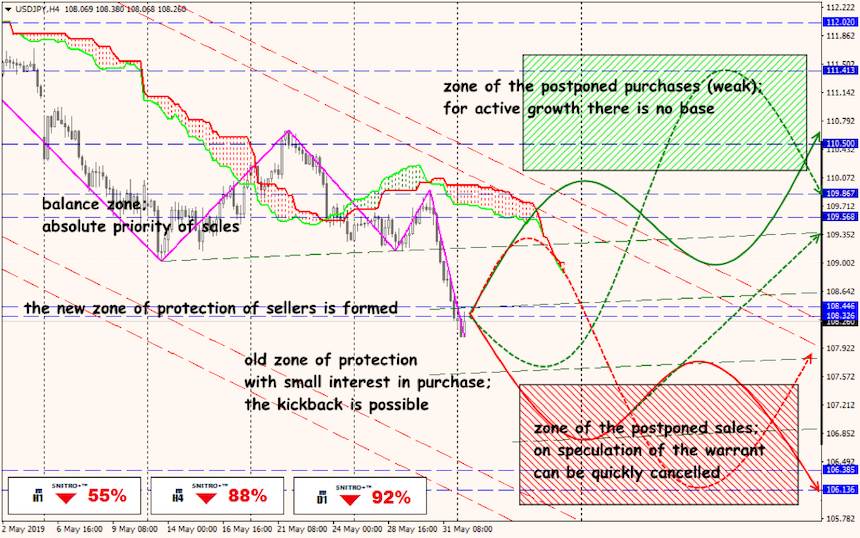