Spring routes do not change

China bargains, Spain votes, and Italy rejoices to maintaining S&P rating. The dollar once again proved that it is not a dollar strong, but his competitors are weak.

All painful points of the market remain.

Euro showed for modest decrease in the IFO index stronger falling, than on excellent american GDP (3.2% against the forecast of 2.2%). Significant falling of a share of import as a part of GDP means that tactics of aggressive protectionism and the sales duties of Trump is effective after all. Figures from the management of FOMC said more than once that the economy of the USA is in an excellent form, but the forecast of growth by only 2.1% in the current year assumes decrease in speed.

Any of parties of Spain does not receive the majority at parliamentary elections, the probability of formation of any coalition still low, but the risk of repeated elections is minimum. Negotiations on the coalition will be long and will lead to start of fiscal incentives and the termination of the mode of austerity. Elections distracted electorate from an exit subject from the EU and strong influence of the Spanish subject on euro in the nearest future it is not expected.

Information on a total ban of the USA on purchases of oil of Iran pushed the market up only till the moment when tweet-Trump reported that he personally called OPEC and «asked to reduce the prices». The secretary general of OPEC and Saudi Arabia disproved such fact, but it appeared enough to the market that optimism of buyers considerably decreased. Donnie had to specify that only the «correctional» growth of volumes of production was a topic of conversation. However, the bill NOPEC on a table of the American president is not capable to lead to significant increase in quotas of production earlier June summit of OPEC yet. From the point of view of Saudis, fears of the market on a subject of strong failure in supply of oil from Russia to Europe because of high concentration of chlorine-containing connections are exaggerated. However, scandal runs high, the volume of the «rejected» Urals already exceeds 3 million tons and it is difficult to assess the global consequences of this situation.

Despite the thin «spring» market, active information week is waiting to us.

Meeting on 1 May is working, correction of a rate and new forecasts are not expected, the brief accompanying statement and Powell's press conferenceonlywill be offered to analysts. The economy and labor market on a positive that allows FRS to be in the pause mode, the relation to the current delay of inflationremains the main subject of all performances. Media actively prepare the markets for reduction of a rate, Trump directly demands decrease by 0.50%, he is supported by economic advisers of administration led by Kudlow and the vice president Pence. Members of FRS will be silent till Thursday then it is necessary to expect splash in comments for correction of traditional muffled rhetoric of the head.

The pound waits for data on business activity, PMI of the industry and services of Britain and also BOE meeting. The Brexit subject loses relevance so far though May intends to organize the next vote in the next 10 days (current week – it is improbable) to try to avoid participation of parties of Britain in elections to European Parliament. At the same time Mayholds negotiations with the prime minister of Ireland on amendments to the agreement on a commercial transaction, but there is no positive information. Chances of success are not enough, Tories are ready to change rules and to carry out a vote of no confidence of May in June, and Johnson – the most probable candidate for leaders.

Trump was surprisingly peaceful during the prime minister's visit Abe though Japan joined aEU position on requirements of additional concessions from the USA. The Japanese officials intend to protect the agricultural market by any methods, even to the detriment of the high-tech industry. Discussion of the main key points continues, but information on negotiations very little. Pay attention: the Japanese markets will be closed in the period of a release of data of FRS and NFP so it is worth waiting for the main reaction on yen next week.

Negotiations so far in progress so strong statistics on March industrial production and retails of China can be usual market noise. Date of a meeting of Trump and Xi Jinping has to be defined after the visit of the Deputy Prime Minister Liu to Washington on 8May. Expectations though some reality are too big. If after Liu's visit date of a meeting is not announced, then the stock market of the USA will fail. China will publish PMI tomorrow and on Thursday though since Wednesday will go for the weekend till the end of the week.

We pay attention to number of new jobs, repetition of the failure of February report will lead to change of rhetoric of FRS. ISM services will be published on Friday after the report on labor market. Other data will be secondary, with a growth of salaries above 3.5% year to year and/or falling of unemployment rate of U3 lower than 3.7% the dollar will quickly rise. Strong figures in the number of places, but with weak supporting data can be ignored by the market in general.

In addition to NFP, inflation of consumer spending, the report of ADP, ISM of the industry and services and statistics of personal expenses / income will be basic data regarding the USA. On the Eurozone it is necessary to trace GDP in 1 quarter, the report on inflation, unemployment rate and PMI of the industry for April. It is worth paying attention to releases of indexes of purchasing managers in a manufacturing sector of China and Germany. The countries of the Eurozone have a day off on Wednesday. We remind: the liquidity in Asia will significantly decrease, it is worth being afraid of repetition New Year's a flash-crash. 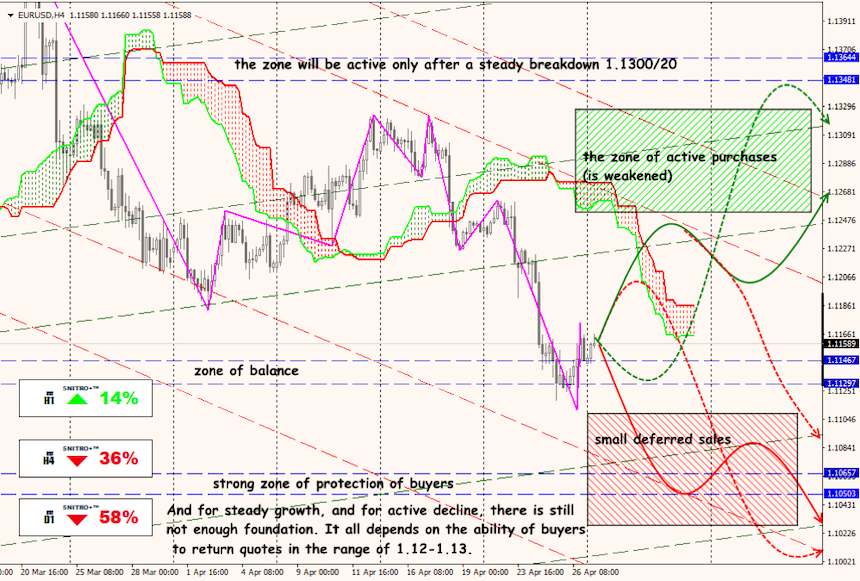 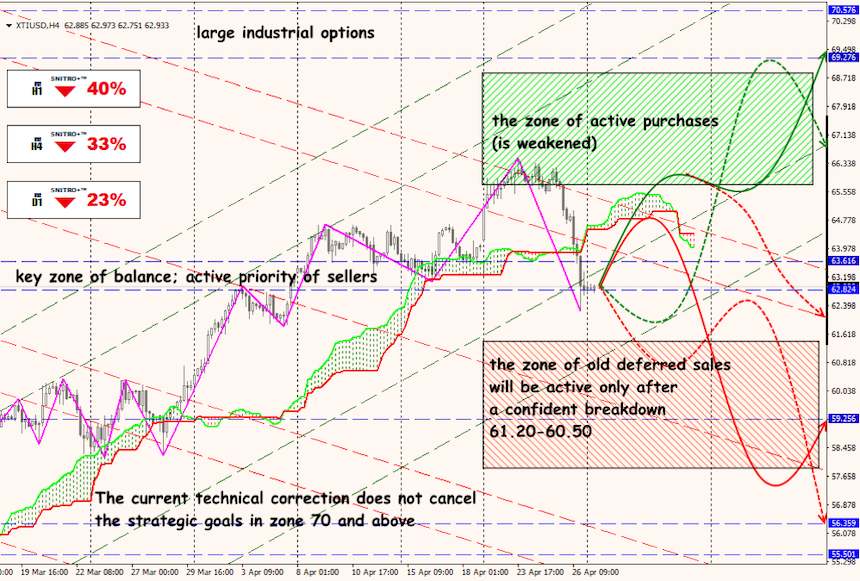