Speculators «keep» the market in a dangerous zone

The USA panics; China threatens; Italy discusses, and London is going to fail Brexit. Volatility remains critically high. The current week will be rough and will touch on all key issues.

The president for the first time this year afforded some concern in connection with the fall of almost all share assets of the USA. On Wednesday Trump organized a teleconference with heads of JPMorgan, BofAML and Citigroup banks for clarification of the reasons of falling of the markets, result – zero. At the same time even his colleagues understand that deceleration of the economy of the USA is caused by anarchy because of the war of duties, but nobody intends to argue with the president because it is useless. On a recession case, except pressure upon FRS, Donald has no backup plan of actions.

The White House postponed increase in duties on a number of goods of China until December 15 (not to break a season of Christmas sales) that is recognition of impact of increase in duties on import of China on consumers of the USA. The insider reports about intention of the Ministry of Trade to prolong a delay for sales of the products of Huawei by the American companies for 90 days in order that it could service the existing clients. The official solution should be announced today. Political assistants of Trump urge to support protesters in Hong Kong, but Bolton and others draw on more hard line. The announced telephone conversation with Xi Jinping will hardly add the optimism to this subject.

The protocol of a meeting of FRS dated July 31 almost did not become outdated in terms of statistics. Data remain strong, the growth of labor market and domestic demand in the USA advance expectations. But this document lost relevance in a subject of escalation of trade war of the USA-China and assessment of deceleration of world economy. If the protocol was not modified after July 31, then its tone will remain hawk: at that time on July 31 members of FRS were not ready to continue decrease in rates without strong indications of deceleration of economy of the USA.

A strong U.S. data block on Thursday failed to significantly change the minds of markets. Powell's performance on Friday at 16.00CET will be the main event of the week. The exact schedule of all performances will appear on Thursday night, but it is already known that Draghi will not be present, the group from the ECB will be headed by chief economist Lane.

Following the inversion of the yield curve of 2-year and 10-year US STOs last week (Dow Jones fell 3.05%), markets are confident of an approaching recession in the US, but so far doubt the Fed's willingness to support the economy before this decline in US forces becomes a fact.

Powell now sees his battle with Trump as a personal war and intends to control the information: an insider reporting that FRS members are barred from making any comments to the media. Jay's view of current growth and the outlook for the economy is of no interest to anyone, and clear language is needed regarding rate adjustments. The traditional «empty» speech without a link to the current situation and without indicating further action by the Fed will be perceived extremely negatively and will provoke panic in the markets.

The Central Bank of China continues to hold the exchange rate above 7.0, the IMF repulsed the attack of the US Ministry of Finance on the marking of China by a currency manipulator, stating that the yuan exchange rate was adequately estimated taking into account the current situation.

Official Beijing either does not read the Twitter of the President of the United States, or decided to ignore it. The concession from the US was perceived in Beijing as a weakness. China is ready for an offensive and promises Trump «retaliation.» The State Council Tariff Committee reported that the latest increase in duties on Chinese goods by the United States had deprived the country of the opportunity to resolve the conflict through negotiations. China will also raise duties on American goods, even realizing that these measures will not do much damage to the US economy. There are no statistics of China this week.

The U.S. President complained that the EU treats the USA even worse, than China, but these statements already very few people reacts. Euro exchange rate showed the worst week for the last 4 months.

Euro became uncontrollable after the statement of the managing director of Bank of Finland Wren who made bold to announce mitigation of credit policy of the ECB at a meeting on September 12. The sense of such statement is unclear because the overestimated expectations of the market can lead to reverse reaction upon with growth of euro.

Merkel's government is ready to allow budget deficit in case of the beginning of recession in Germany that allowed to reduce losses after the previous statement. Current week it is necessary to fulfill speculation on a speech of the prime minister of Italy Conte in the Senate on August 20. It is necessary to pay attention to the protocol of the ECB with the publication on Thursday and also performances of members of the ECB on a symposium in Jakson Hole.

The situation around the rigid scenario of an exit is heated. The first meeting of Johnson with Trump is planned at the summit of the G7: John Bolton said that the USA is ready to offer Great Britain commercial agreements separately on each sector of economy after an exit from the EU without agreement. Johnson obviously expects to sign the global agreement with the USA, but democrats will not allow to pass to the trade agreement through the Congress if the parliament of Britain does not ratify the agreement with the EU on a divorce.

Quite good statistics on labor market, inflation and retails supported positive dynamics on all to assets with participation of pound. Growth of a spread of bond yields the Great Britain/the USA and Great Britain/Germany is observed. It is improbable that Johnson and Macron's meeting will lead to some concessions, the true situation will be clear on Wednesday after Johnson's meeting with Merkel. The result of negotiations will have a strong impact on all markets.

The parliament will vote on a vote of no confidence to the government on August 20 (most likely – against) that will give the chance to Mattarell's president to issue the mandate of a «5 stars» party on forming of the new majority. The temporary coalition with democrats is possible to lay off the number of deputies in parliament and adoptions of the budget for canceling of increase in the VAT, then it will be necessary to wait for elections not earlier than December.

Key subjects: Brexit, trade wars, in particular perspective of increase in duties of the USA for import of a car of the EU; active desire of Trump to devaluate dollar and the imminent reform of the WTO. Opening of the next week with a gap on capital assets − is guaranteed. 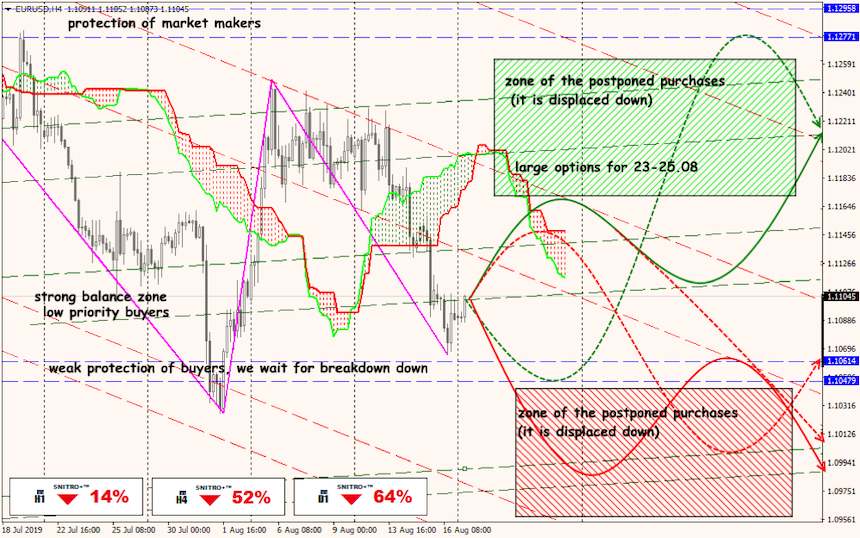 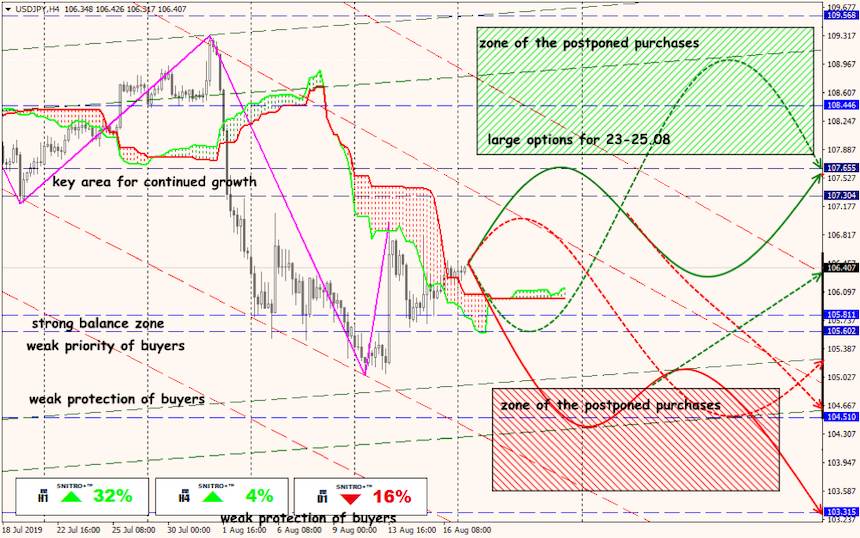