Some news in a festive basket

From the point of view of the market, the week before Christmas looks faultless: necessary information has appeared at the optimum moment and in the most expected tonality

Tranquility was broken only by euro, but the general alignment of forces isn't broken.

The debate on tax reform of the USA is closed: Trump has signed the distressful law. The main beneficiaries from the introduction of reform are developers, retailers, the transport, oil and gas, insurance, pharmaceutical, machine building and telecommunication companies. Other categories of citizens aren't studied yet by analysts though (theoretically) reduction in taxes and release because of it a part of the income of Americans will affect PCE and CPI subsequently. Both chambers of the U. S. Congress on Friday (at night!) after all ratified the bill of short-term financing of the government till January 19 that has caused to sharp, though short-term, growth of dollar.

Now dollar positions in the light of the potential implementation of a chain "tax reform - inflation acceleration - toughening of monetary policy" look strong, and the unwillingness of investors to buy it says that the factor of the fiscal system is con-sidered in quotations long ago. Anyway, there are no bases to wait for the decline of dollar current week - the U.S. Treasury carries out on December 26, 27 and 28 a series of placements, usually in such days the dollar speculatively grows. There are signs already that the Treasury is going to strengthen of increasing of a market debt, and it, obviously, only the beginning of a tendency.

With the population of 7.5 million people, the contribution of Catalonia to GDP of Spain makes about 20%, and its inde-pendence could become a successful example for other countries where the euroscepticism thrives. With small advantage, the block of supporters of independence won last parliamentary elections, but this victory looks Pyrrhic. As there are sharp disa-greements of rather foreign policy in these parties, any large-scale consequences for Spain shouldn't wait. The number of sepa-ratists in parliament doesn't matter if it at any time can be dismissed by the central resolution by force.

EUR/USD has reacted negatively, but hasn't given a reason for speculation on new political eurocrisis, and was quickly re-stored. The long scenario is obviously to this drama and it will press for euro up to the Italian elections in the spring of the 2018th.

Easy sword-play in an information field of Brexit: the EU commissioner Barnier has said that Great Britain shouldn't expect the special agreement for the city of London, in turn, the premiere of the Brexit Davis has warned the EU that he didn't try to choose certain sectors of the economy for the trade agreement.

Britain has published the report on GDP for the third quarter which couldn't hype up a pound. Though the indicator has ap-peared above the forecast, but in the third quarter the British economy has slowed down growth in annual terms from 1,9% to 1,7% that is noticeable below average for the last 4 years.

Kind of followers of Brexit didn't try to behave optimistically, economic indicators show that exit consequences for national economy will be deep and long. The main reason for delay consists in fall of real income of the population which because of the weak pound have to spend more usual for import, and growth in incomes lags behind inflation. From the point of view of the market technically there are no reasons yet for withdrawal of pound of quotations from the current levels, the pound re-mains the outsider against euro, and against the dollar.

The Bank of Japan has passed the decision to keep monetary policy invariable, despite strong indications of strengthening of the economy. It is stated that there is no sense to hurry with the refusal of incentives as inflation is still far from target 2%. The Central Bank has reconsidered towards growth the estimates on personal consumption and also capital expenses, but ana-lysts don't expect on serious changes until the end of next year.

The defensive budget of Japan ¥5.19 trillion ($46 billion) sent to parliament exceed indicators of similar last year's expenses on 1.3%, and assumes modification and strengthening of the missile defense system of Japan in the conditions of political tension in the North Korean-Japanese relations and nuclear missile threat from DPRK. It already the sixth increase in the size of the budget on defense expenditures in Japan from the moment of coming to power of Shinzo Abe in 2012.

Oil is in the second stage of growth this year after prolongation of the agreement of OPEK+ until the end of 2018, future con-tracts for the next month showed minor changes in dynamics. Following the results of a meeting of technical monitoring committee (JMMC), in November the countries of OPEK+ have implemented the plan for the reduction of production for 122% that is the highest monthly level from the moment of the introduction of the agreement in force. The prices of basic brands already bargain in a zone of the level of $60 which leaders of OPEC assumed to see only in 2018

By data already from two sources, it is entrusted to the Secretariat of the cartel in Vienna to develop the plan of an exit from the agreement on the reduction of deliveries − a strong indication of the fact that producers allow this step in the near future, at least theoretically. While prices of oil have grown to the level which, according to OPEC, is favorable, the main stated pur-pose of the transaction - a reduction of stocks in the developed countries to the level of an average value in 5 years. Partici-pants of OPEK+ will hold another large-scale meeting in June, but anyway, the discussion about an exit from the agreement will begin till December 2018 when the world oil market, by the expectation of analysts, has to return to balance.

The markets will consider statistics of the last and current week only after opening in January, but we recommend to pay atten-tion to: a consumer price index of Japan and Germany, the unemployment rate in Japan (the protocol of the last meeting of BOJ will be published today too). And also we do not pass by: the indicator of consumer confidence of the USA, the volume of crediting of the private sector of the eurozone, the PMI index for the production sphere of China. The publication of the regular statistics about inventories of oil and oil products in the USA is expected on Thursday.

The European markets will return to the trade only on Wednesday though the States will continue to work already tomorrow. We remind that liquidity very low, the trade will take place in the narrow range up to 2 January, and it is not necessary to expect formation even of subtle trends. The "thin" market will traditionally collect stops at the beginning of a year and will decide on the direction only by the end of the next week. Any trade is not recommended.

As the year ends. We are grateful for our work with you, we wish personal victories, financial success and peace in a new year. Happy holidays! 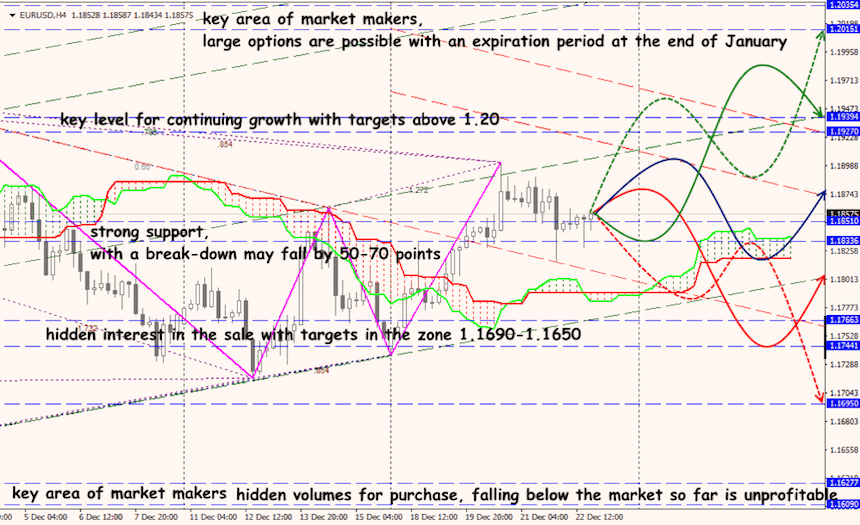