The rustle of money and metal in a voice: if Yankees like these, then we will be at war

Trump has begun a war in which there will be no winners. Time for correction of the policy of the ECB is chosen unsuccessfully.

Strong NFP disturbs FRS. The markets enter the period of a constant stress.

Draghi has managed to cross out the growth of euro after the publication of the statement of the ECB. In the conditions of trade wars of Trump very strange that forecasts of the ECB for GDP growth of the Eurozone are based on the increase in export and net of the trade balance. Nevertheless, it is stated:

The fixing of profit before NFP also helped to the decline of euro.

Data of NFP appeared strong that confirms the need for three increases in rates this year. The publication hasn't caused a considerable reaction as market expectations were excessive and are in many respects won back by fixation of profit after the meeting of the ECB in advance.

Powell, using this report, can say that labor market still has a space for growth, but if his professional duty wins against the fear of Trump, then the head of the Federal Reserve is simply obliged to recognize that risks of overheating of the economy of the USA promptly grow. Trade wars can blow inflation stronger, than it is necessary for officials of the Federal Reserve System that will force them to raise rates more aggressively.

The resignation of Gary Cohn is externally similar to the refusal of the doctor of the hopeless patient. Tariffs for «metal» were the last straw among disagreements of the president with the chief adviser for the economy. Cohn too actively acted and even tried to organize certain «summit» of a protest of businessmen for whom metal prices have key matter.

From the moment of the inauguration in the White House about ten key assistants, including the main ideologist Stephen Bannon and the director of communications Hope Hicks have been replaced already; from those who have led Trump to the victory, remained only Mnuchin. Gary Cohn was highly appreciated by the investment community and its resignation, except volatility of the Asian markets, has caused aggravation of the competition in the management of Goldman Sachs and the nervousness of the markets will remain before the appointment of the new adviser.

Today already very few people remember that at Obama the unprecedented agreement on transatlantic partnership Europe-America has been nearly signed. They are late. Trump has buried it, having signed the decree on increase in duties on steel import for 25% and aluminum for 10%.

Canada and Mexico have been freed from an increase in duties for an indefinite term − until negotiations on NAFTA continue. For all others, there were 10 days before the first volley of a trade war, that is America gives chance «to rush» to Trump's legs and to offer «The Gift of the Magi» in exchange for release from a new tax.

However, on Saturday negotiations of emissaries of the EU with the US Trade Representative Lighthizer haven't yielded a result. The EU has warned that it is ready to enter own 25% tariffs for the American goods of $3.5 billion – generally on traditional brands which are made in key Republican states (motorcycles, oranges, tobacco, whiskey and so forth). Trump has reacted quickly and not especially thinking − it is offered to the EU to cancel all limits for the American goods in general, and in case of reciprocal duties, the USA will raise taxes on the European cars.

Of course, increase in trade duties of the USA won't exert an immediate impact on Eurozone economy, but if the EU isn't excluded from this tax list, then reciprocal sanctions will be imposed within 90 days. Negotiations will be continued at the summit of OECD in Paris on March 12-13. The growth of euro on this subject is possible only speculatively.

Italy is ready to begin the process of formation of the government, and though voices completely are still not counted, nothing can already influence the general alignment of forces. The president of Italy waits until emotions abate and the reason will join, the beginning of consultations with leaders of parties is planned after elections of speakers to both chambers on March 23.

The current week we pay attention to the American data on the inflation of the prices of consumers, retails, data on the sector of construction; across the EU – on dynamics of inflation for February.

The period of «silence» there comes in FRS, but investors are nervous concerning correction of forecasts for rates, therefore, the dollar will continue to be in demand on falling. Men of weight from the ECB traditionally will try to level pigeon rhetoric of Draghi. Mario plans to act in Germany on Wednesday in 9.00 CET, but hardly his opinion will cardinally change.

At the summit of leaders of the EU on 22-23 March the decision on Brexit and discussion of reforms of the Eurozone are important for dynamics of pound and euro. If the dollar doesn't get considerable advantage upon a meeting of FRS on 21 March, then by results of the summit falling of dollar can be prompt. 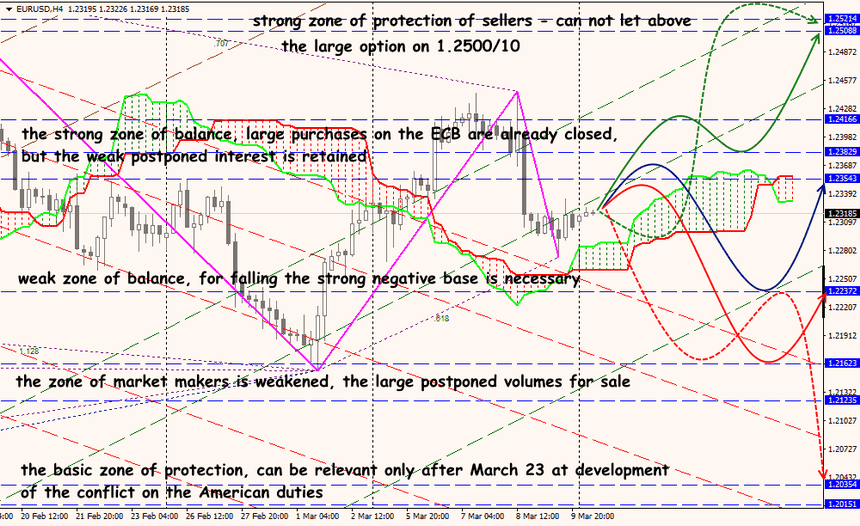 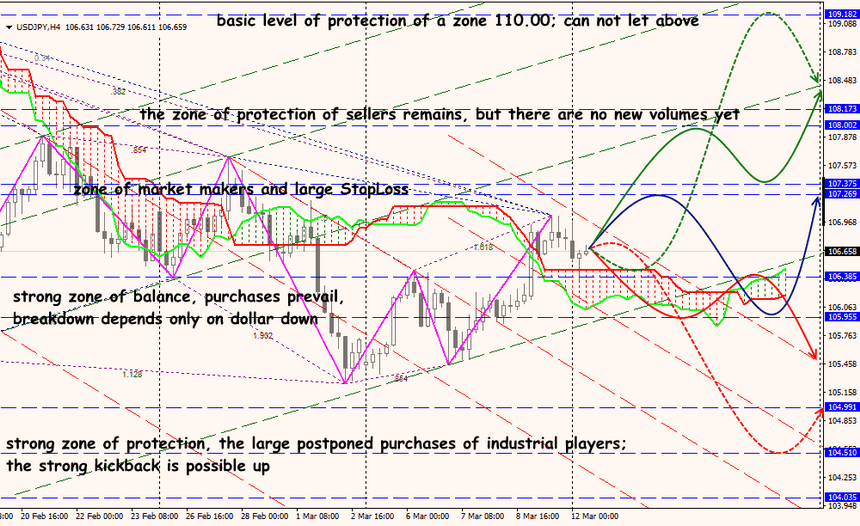