The market was convinced once again that forecasts at the beginning of a year are useless.

All painful points of the leaving year remain in inheritance to a future year. Europe and China were the most injured, but solutions of these problems do not coincide.

December became a rotary point for a dollar. Expensive credits will slow down consumption and increase in prices, but will slow down economic growth. Alas, FRS and Trump have the different purposes as the president`s business is the real estate, and inflation is necessary for it. The Federal Reserve System has ignored Trump's twitter-appeals – the range of discount rate is increased to 2.25-2.5%, but the double and not triple increase is planned for the next year.

Powell was careful in statements, but all the same was more categorical for the markets. The regulator will continue to monitor global and financial development, and interest in external factors of influence will be a signal for a change of monetary policy to neutral. Potential of tax reform is already exhausted, corporate profits in the current year grew by 18-23%, the trade conflict with China continues and FRS is ready to brake process of increase in a rate.

The ECB closes the program of buying up of assets since 1 January 2019 (a gift to the 20th anniversary of euro!), but leaves the markets in uncertainty. It is unclear whether the rate will be raised in the summer of 2019 as it was promised. The former head of BOE Mervyn King considers that it`s time to use Maradona's effect and to try to deceive the markets most effectively. Draghi's phrase about the shift of balance of risks towards decrease and also deterioration in forecasts of the ECB for GDP forced to be nervous large speculators – they already scented smell of recession and sell assets.

Trump's protectionism will only become more active, however trade wars are not critical yet – dynamics of export of EU countries is positive. The peak of the budgetary crisis is passed, the German automotive industry recovers, drop in oil prices is favorable for the economy, acceleration of growth of the average salaries also gives the ECB a reason for optimism: the Central Bank is ready to carry out reinvestment of the portfolio within a year after end euro QE.

The reason of «the burning Paris» needs to be looked for in the program of reforms which Macron began still being the adviser and the Minister of Economics at the previous president Hollande. At least, restriction of the rights of workers in favor of employers, toughening of the budgetary sphere and reduction of taxes was supposed. Hoped that rich men and business reinvest saved in the real economy.

As a result, the revolt of «yellow vests» forced to wind up tax reform, and now, instead of the promised economy, a budget deficit of France can grow approximately by €10 billion that considerably exceeds the budgetary 3% by rules of the EU. Macron had to refuse an increase in a tax on fuel and on pension payments, and at the same time to increase compensation for €100 to workers with the minimum wage. The situation is controlled so far by the authorities, but calm obviously temporary and figures of the EU estimate it as very dangerous.

The unstable economy of Italy is much more dangerous to the EU, than, for example, debts of Greece, or even than Brexit. The budgetary war of the EU with the Italian parliament goes with local overweight towards alliance so far. The final text of the budget-2019 agreed with European Commission came to the Senate of Italy at the last minute, but, nevertheless, was accepted. As a result, Rome reduced the forecast of deficiency for the next year to 2.04% of GDP and lowered the forecast of economic growth from 1.5% to 1%. To come into force, the budget has to be approved by the lower house of parliament until 31 December.

There is no agreed decision. Attempts of eurosceptics to organize mass protests were unsuccessful. Theresa May proved that she is capable of resolute actions and reserved the Prime Minister's chair, but does not plan to submit alternative Brexit options for consideration. Tension grows in a situation, a position of the EU extremely rigid, the British parliament once again transferred vote. The new round of debate will open on 7 January. If May's project does not get approval on 14 January, then there is 21 day for the preparation of the new plan (and its coordination with the EU!) and a week more for the vote. Otherwise on March 29 will be a rigid exit without agreement which negative consequences even visionaries do not undertake to assess.

The world after all hopes for «loyal Brexit» especially as the economy of Great Britain finishes the year on the rise: the growth of the average salary and employment on a maximum, retail trade turnover grows, forecasts for industrial production volumes (proceeding from the latest data of CBI) are positive. The last chance of it is always: May can exchange result of the vote for the resignation after Brexit.

The decline in demand and growth of slate production in the USA forced OPEC to look for allies again. Under the terms of the agreement, OPEC reduces production by 800 thousand barrel/day from October levels; partners of OPEC will lower the offer by 2% or by 400 thousand barrel/day – it will be enough for the balance of the market in the first half of 2019. Small exporters suffer from disproportionate loading now and it is in a situation when Iran, Libya and Venezuela, in general, are freed from a decrease in production. The conflict in cartel develops, and it is no wonder that the markets practically did not react to the new agreement. OPEC it is ready to publish quotas for the countries and the statement of Saudi Arabia for production reduction by rates higher, than it is provided by the agreement. Rates of hedge funds on the growth of Brent and WTI are on three-year minima. The market will not raise the price unless the strong case that new conditions are satisfied. Parameters of the OPEC agreement can be corrected not earlier than April.

Trump is at war on three fronts – China, the EU, the USA, but obviously does not understand, what could be consequences for the world economy. The volume of the trade which got under restriction can reach about $800 billion and more than 70% of losses fall just on these regions.

China specularly answered to duties: focused blow on states products of the farmers loyal to Trump; complicated life to the American companies (about $300 billion revenue in the Chinese domestic market); is ready to remove surplus trade in services − nearly $40 billion. Beijing has strong political influence on Pyongyang and can break the agreement with the USA − a subject of personal pride of Trump.

Europe raised taxes on bourbon and motorcycles, introduced 20% of duty on import of €10 billion and reduced collecting from import by €18 billion, but its main problem – coordination of countermeasures with those, who (as it seems to them!) are not disturbed by Trump yet. Whether will the USA win a war? Donald has arithmetics. But analysts hope that Trump only bluffs counting on local concessions especially as attempts of the international blackmail lead only to the growth of the status of China as superstate. The relations of the USA-China will remain the base of global balance.

On Saturday McConnell released senators of the USA for vacation and till 27 December no votes are planned, but in general, the problem of the shutdown is not solved that will press for a dollar. Reaction to statistics of the current week will be fulfilled not earlier than 2-4 January. Europe will begin to work on Wednesday, the exchanges of America will continue to work already tomorrow, but the liquidity remains critically low. At the beginning of a year, the «thin» market traditionally removes StopLoss on both sides and will decide on the direction only by the end of the next week. We analyze, observe and have a rest. 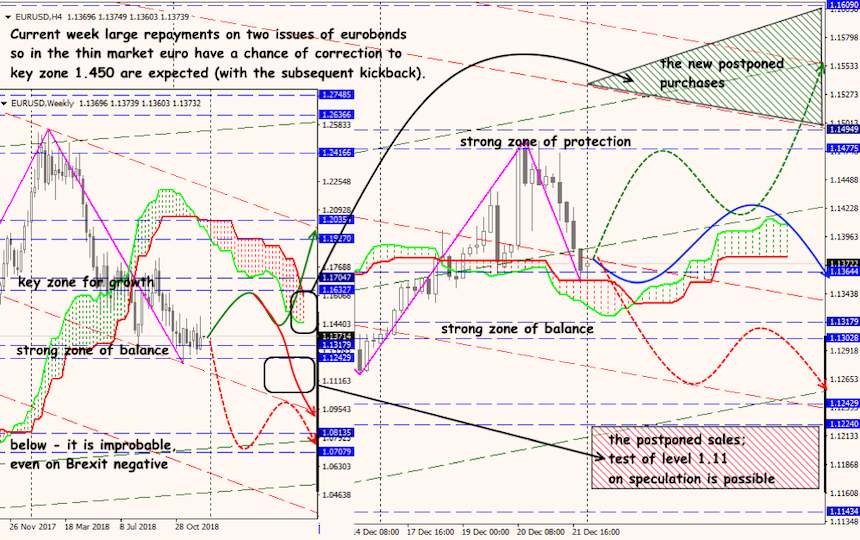 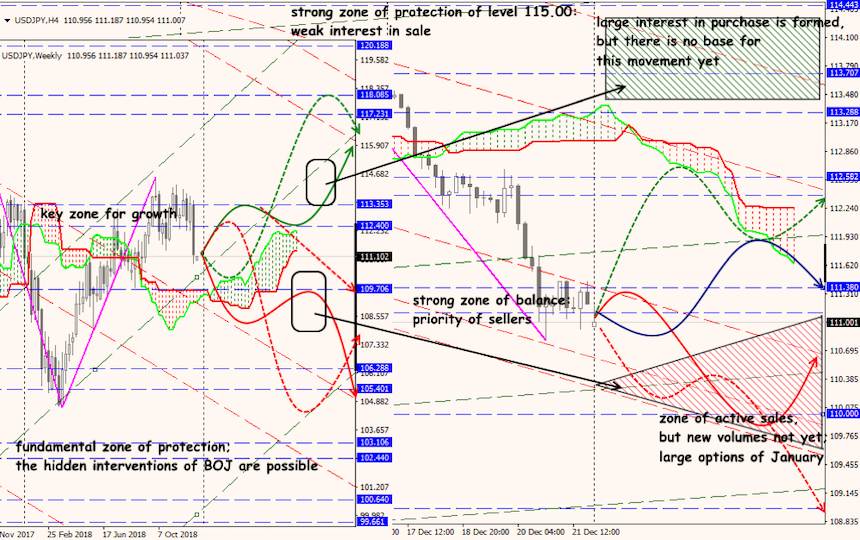