Questions without answer: the market waiting for miracles

The last attempt to close unresolved problems of the year: ECB keeps a rate; Draghi speculates; Trump threatens; China resists. We wait for FRS and a positive on Brexit.

Apparently, the monetary policy of Europe, loyal to global problems, comes to the end together with Draghi's cadence. The meeting was boring: ECB finished the program of purchase of assets, worsened the forecast of growth of the economy, but will not change a rate while inflation is not stabilized at the level of 2%. The great manipulator did not miss an opportunity to tease the markets: the ambiguous phrase about the shift of balance of risks towards decrease dropped euro and the yield on the European bonds.

Draghi refused to speak about the date of the increase in rates, but it is already clear that irrespective of growth rates of economy and inflation, the ECB will displace incentives. The publication of failure PMI of the Eurozone morning of Friday and new aggravation of protests in France did not leave chances to euro.

At the EU summit leaders agreed on a package of reforms for protection of the eurozone against financial crises: the creation of the mechanism of insurance during the procedure of financial improvement of banks and expansion of powers of ESM. Also discussed an initiative of creation of the budget of the eurozone − the specific ideas are expected to the next forum of Ministers of Finance of member countries.

Theresa May's determination and endurance are estimable: the Premiere lady sustained a vote of confidence from the party in exchange for a promise to resign in March 2019. However, the summit of leaders of the EU was catastrophically negative for May: the EU refused obligations about the temporality of support of open border with Britain, and all formulations, favorable for May, were withdrawn from the declaration on intentions. Though, in a private order, leaders of the EU declared determination to continue negotiations.

Even in the statement for vote cancellation on December 11, the Prime Minister gave only several minutes to the main reason for the conflict under the agreement with the EU. It is about «the Irish insurance» which will leave border on the island between Northern Ireland and Ireland open in case Great Britain leaves the EU without the approved agreement.

The situation is heated stronger, than ever from the moment of signing of the Agreement of Good Friday. The lack at least of the minimum compromise on the Irish problem does not leave a chance to May. On 13 December the conservative Lidington held negotiations with deputies of the Labour Party, trying to create the interparty coalition for a new vote on Brexit. The result of negotiations is unknown, but the idea obviously becomes more active closer by January 20.

BOE on Thursday will be hardly optimistic taking into account a negative on Brexit, but if against the background of growth of salaries also the growth of inflation is shown, then Carney will be forced to support pound verbally. So far speculators just do not understand what to do with pound therefore large volumes remain out of the market.

Conte represented the «next» budget of Italy for 2019 with a deficit of 2.04% to Juncker and it seemed that both parties of the conflict are satisfied, but by detailed consideration calculations of European Commission dispersed from the Italian calculations for 0.25% or about €4.5 billion. It is necessary to correct «error» till Monday though the true deadline is 19 December, otherwise, the process of penalties is started. The compromise on Italy is a condition precedent for a positive to euro, but chances of the solution of this problem are minimum.

The rhetorician of FRS sharply changed from the November meeting: decrease in growth of the economy caused shock and misunderstanding of the general situation. Statements for the need to suspend the increase in rates and, perhaps, weakening of dollar exchange rate, apparently, was (secretly!) accepted on the sidelines of the Ministries of Finance and heads of the Central Banks of the G20.

Nevertheless, FRS with 90% probability will raise a rate at a meeting on 19 December not to strengthen panic. The main reaction of the market is expected on dot forecasts of members of FRS for an increase in rates: forecasts without changes – the sharp growth of dollar, decrease in forecasts to one increase in a rate in 2019 − sharp falling. Active conflicts during the discussion in FRS is improbable.

The Powell`s rhetorician during the press conference is expected politically optimistic: we pay attention to its personal forecasts for a neutral rate, the risk of overheating of the economy and also an assessment of the impact of the result of negotiations between the USA and China to the policy of FRS.

They again did not give $5 billion for construction of a wall on the border with Mexico to Donald − democrats were ready to fork up only for $1.375 billion and that for concessions on immigration. The president took offense so the USA risks to meet Christmas in a shutdown situation again, 21 December is a deadline. The situation with the tough government next year will only worsen − democrats will receive control over the lower house.

Trump can be understood: revisions concerning all structures to which the current president over the last 10 years was related became more active. Trump Organization already defends itself in the American courts where it is accused of business management with the foreign governments, incorrect tax practice and illegal receiving the state subsidies.

The shutdown situation, as well as everything that is connected with Trump, is critically negative for the dollar, but if the extension of financing of the government by the U. S. Congress till January there will not be the panic on the dollar.

Trump on Friday said that the USA and China can shortly enter a commercial agreement, however, implement these imaginations is very problematic if the USA does not lower the degree of the pressure. Yes, the period of exchange of curtseys of the USA and China proceeds, despite problems of Huawei. Beijing increased purchases of the import of the USA important for Trump, and lowered duties on import of a car of the USA, however indignation of Asians obviously accrues. Last week China forbade the sale and import to the country of the Apple smartphones − stocks of the American giant dropped by 1.7% at once. Apple can lose a profit of $12 billion a year. The hidden sanctions experienced also a number of smaller companies which are not visible yet of a window of the Capitol.

Further sudden detention of two citizens of Canada who directly are not connected in any way neither with investigation nor with the Defense Ministries – China seldom loses diplomatic wars. It cannot be counted the following step of Beijing in case of aggravation of a situation especially as negative statistics continue to poison mood of trade partners of China. Both parties do not lose optimism, but the main fights are obviously postponed for next year.

The ECB switched into the «dream» mode, in FRS the silence period so we do not wait for active comments from financial figures. Statistics of the current week:

We consider all data with a view to next year. Also, we do not forget about the increased liquidity within a week – the last chance to earn in the current year. 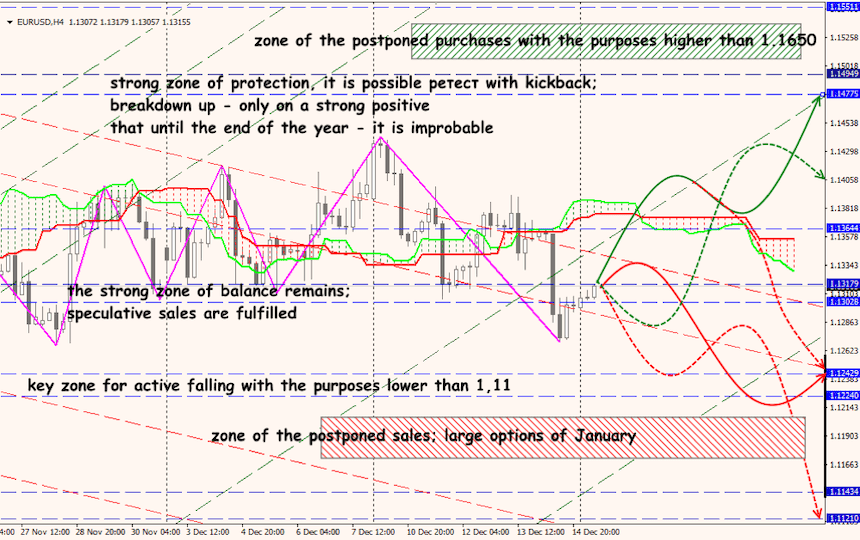 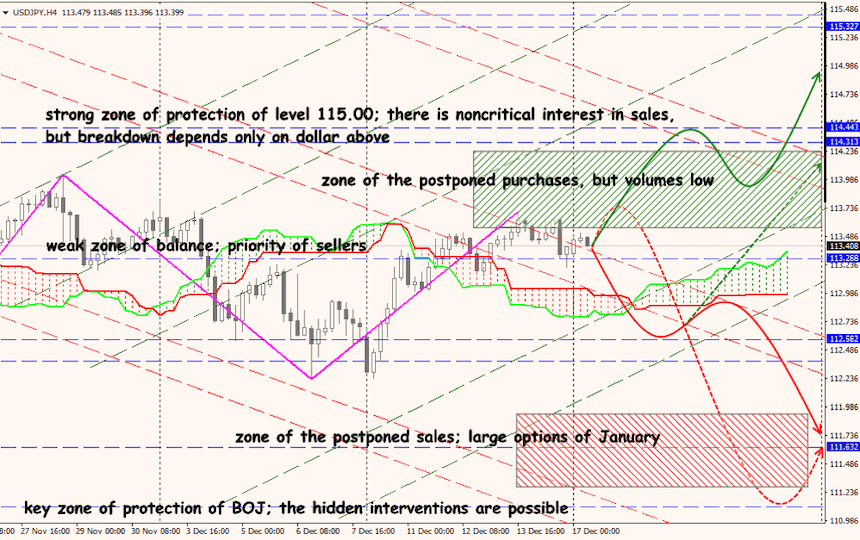