Playing against the rules, but miss the mark

Trump missed again; The Fed does not change its position; OPEC plans to cut prices; China is trying to control gold. The world is preparing for the second wave of COVID-19.

It is more and more difficult for European politicians to find an effective compromise, but when the desire of investors to get rid of the dollar and the growing interest in the euro are combined, then the bulls on EUR / USD are practically unstoppable. So far, the euro is supported by an improvement in the epidemiological situation. Also, after diversifying the portfolios of large investors and foreign exchange reserves of central banks, the European economy will have a chance to return to pre-crisis levels much faster than the American one. Unless, of course, politicians continue local wars.

The dollar catastrophe was stopped by the Fed's rhetoric, but Trump's next wild announcement about the need to postpone the election date led to another wave of negativity across the entire spectrum of dollar assets. We are waiting for the technical correction of the dollar, as its main competitor (euro) may have its own problems.

The meeting was standard and colourless, with no surprises in the accompanying statement. In the next two months, the key factor influencing monetary stimulus will be the dynamics of the labour market, which will allow assessing the impact of the second wave of the pandemic on economic recovery. Most of the emergency lending programs have been extended until the end of this year.

Powell's rhetoric turned out to be quite aggressive: Jay repeated several times that the current Fed policy is consistent with the current situation, and against this background, the dollar preferred to rise slightly. In the topic of launching control of US T-bills yield curve, one can draw indirect conclusions that the decision will not be made until the end of the year.

The head of the Fed unexpectedly made a few curtsies in the direction of presidential candidate Biden, supporting the initiative on the need to focus on the employment of Aframericans. But this fact hardly means that Trump should prepare for political aggression from the monetary regulator.

The incumbent president of the US, lacking any evidence, reiterated his claims of massive voter fraud in the mail-order process. This casts doubt on the legality of the ballots that were used in the primary during the pandemic.

Oddly enough, the markets perceived this statement as an indicator of Trump's growing chances of re-election for a second term, although big business, apart from a negative risk to the US Constitution, saw nothing in this escapade. There will be no postponement of the election date, Trump does not have such powers. Democrats believe that this Twitter-«circus» is a test of the political mechanism for cancelling or correcting election results in states loyal to Biden.

What awaits us next week?

The July labour market report is extremely important. Experts expect a sharp slowdown in employment growth, although market expectations will be adjusted after the publication of indirect data from ISM and ADP.

The growth in the number of new jobs above 1.5 million will be a positive factor for the growth of the dollar, a negative value will lead to aversion from risk, at least in the first reaction. A strong positive will be a drop in the unemployment rate below 10%, which will lead to more aggressive rhetoric of the Fed members.

The growth of the pound in the outgoing week, according to insiders, was associated with a positional movement of capital before the close of the quarter. The majority of analysts and long-term investors remain persistently bearish. With signs of a second wave of the pandemic and Brexit uncertainty emerging, the need for additional stimulus is growing.

No changes in monetary policy parameters are planned at the August 6 meeting, so a strong reaction is unlikely. Bailey's press conference could have a serious impact on the pound if it is announced that the idea of cutting rates to negative values is still relevant, despite several positive economic reports.

The topic of Brexit is absolutely calm, there is no news, at least positive. An EU banking supervisor said that banks using London as a transit route to the EU should develop a plan to serve EU clients before the end of the transition period.

Today and tomorrow, British Foreign Trade Secretary Liz Truss plans to meet with US Trade Representative Robert Lighthizer and hold talks on a future free trade agreement, but no one is going to rush into negotiations, and no real ideas have yet been announced.

OPEC + is preparing to significantly increase oil production, and as a result, Saudi Arabia will be forced to reduce prices due to increased supply and falling demand. The recent floods and logistics problems in China have also caused imports to decline. The news of the record drop in US GDP in the entire history (-32.9%) provoked a sharp decline in prices for WTI − losses at the low of the day amounted to more than 6%. Be careful − the potential for technical correction is almost exhausted, then only fundamental factors will act.

No important speeches are expected from FRS officials, but comments after the release of NFP data may put speculative pressure on the market.

The ECB continues to pause, although the rise in the euro has long been alarming, which may be reflected in the forecasts and rhetoric at the September meeting. So we read and listen to any comments. 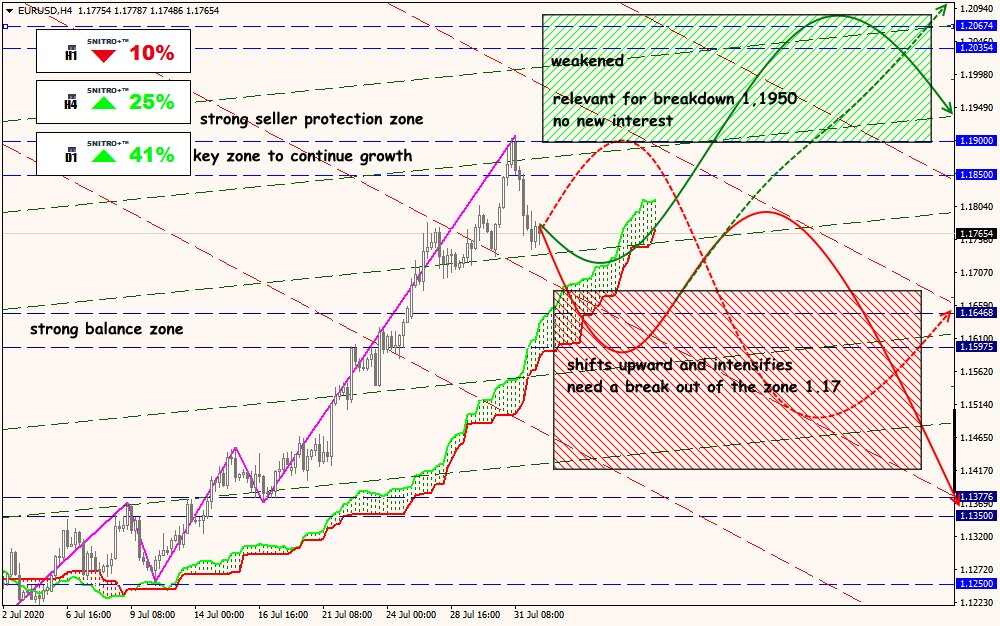 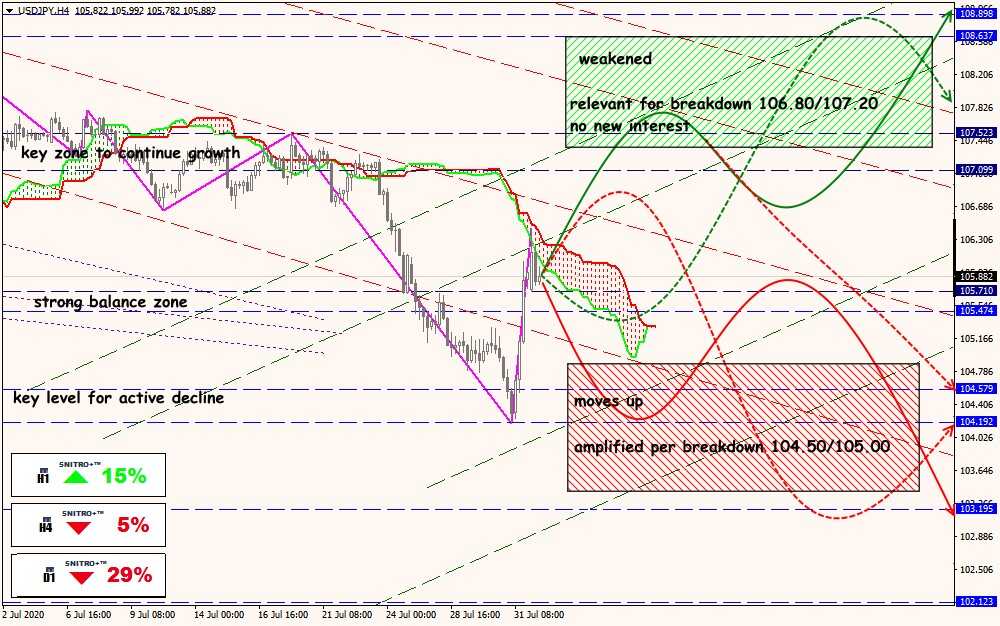 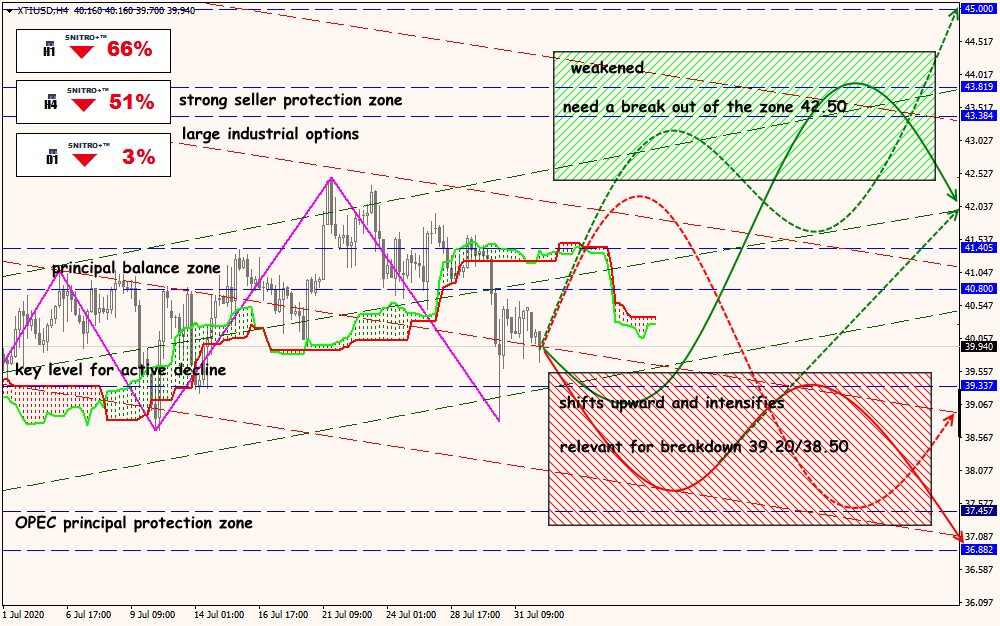