The conflict on NAFTA is almost over; Italy completes fight for the budget; the fate of Brexit also foggy.

FRS has surprised only with Powell's determination; Trump passes to telephone policy. The following victims – China and OPEC.

Members of FRS haven't seen the need for updating the forecasts because of the lack of expectations for the sharp growth of inflation and structural problems for the economy of the USA. The Federal Reserve System has once again raised a rate, recognized risks of the economy as balanced, but further correction of rates is possible only in case of an acceleration of growth of salaries. Market reaction was quiet.

Trump's threats have yielded the opposite result: Powell has taken more hawk position in comparison with a performance in Jackson Hole: «FRS does the work, without paying attention to policy». Jay has evaded the question about the current levels of a neutral rate, but didn't deny lack of risks of overheating of the economy. His performance in the Senate allows hoping that FRS remains the worthy opponent to adventurous attacks of Trump. Powell will give an interview on Wednesday in 22.00CET though his opinion on basic questions will hardly change.

The agreement between Tria and leaders of parties has been signed on the falling pennant late night. The government has come to the agreement on the budget deficit of 2,4% for the next three years that is much higher than an earlier agreed target with the European Commission at the level of 0,8% for 2019. The debt and share markets of Italy have collapsed on Friday, but war isn't finished yet.

On 15 October the new budget will be submitted for consideration of the European Commissions and a debate is expected aggressive. If the yield on state treasury bills of Italy doesn't fall by then, then expenses of the government for national debt service will grow that can cause the growth of budget deficit to the more near-critical level of 3% and basic indicators should be corrected again. The markets wait for rating downgrade of Italy that will put the descending pressure upon euro, at least, until the end of October.

At a meeting of the Cabinet of Ministers, May hasn't agreed to change the plan regarding the agreement with the EU to option in «Canada +» style, being afraid of the real split of Britain. The congress of Conservatives from 30 September to 3 October will pass the final decision on plans of Brexit and will define the fate of the government though readiness to support a compromise on a question of migration is already stated. The EU prepares for May's resignation, Juncker on Thursday has held negotiations with the leader of the opposition party of Labourists Corbyn.

Labourists are ready to vote against any transaction, demand the second referendum. Corbin's position on the Brexit is more acceptable for the EU, but is negative for the economy of Britain. At May's resignation, the first reaction will be on the decline of a pound.

The countries supporting the nuclear agreement on Iran don't intend to refuse the Iranian export. On Tuesday Ministers of Foreign Affairs of the EU, Germany, France, Britain, Russia and China have confirmed the creation of the new mechanism on the basis of SPV for simplification of «lawful» trade between the EU and Iran. The mechanism will allow to carry out financial transactions with Iran without using of the international SWIFT system between the private companies, banks and other structures and also will soften consequences of the renewal of sanctions.

Possibly, such SPV will function in euro, but not in the dollar, and the USA won't be able to control transactions. Indignations of the Secretary of State Pompeo on this matter so far remain unaddressed. On Saturday Trump has called the king of Saudi Arabia Salman to discuss how to provide stability in the market of oil and to support the growth of the world economy. Both SPA and the White House don't report a detail, but hardly Donald managed to affect seriously the opinion of the vis-a-vis in so delicate question.

And a few more news − briefly:

The main statistics of the week remains to the USA: report of ADP, ISM of the industry and services. Relevant NFP requires special attention, the main reaction of the market will be on dynamics of salary: an increase by 2,9% will confirm that acceleration of growth of salaries in August was not casual and will cause the growth of dollar (in 3,0% or above – a strong and long-term trend up). The value of 2,7% or below will give to the descending correction according to the index of the dollar.

On the Eurozone, we pay attention to PMI for September, and the British PMI of the industry and services on Monday and Wednesday respectively. PMI of China published on Sunday have appeared below the forecast, the indicator has fallen in the sphere of the industry to recession border that means the sharp delay of the economy and is negative for assets of the export-oriented and raw countries. However all week is off in China therefore the markets will win back the main reaction after the termination of holidays. 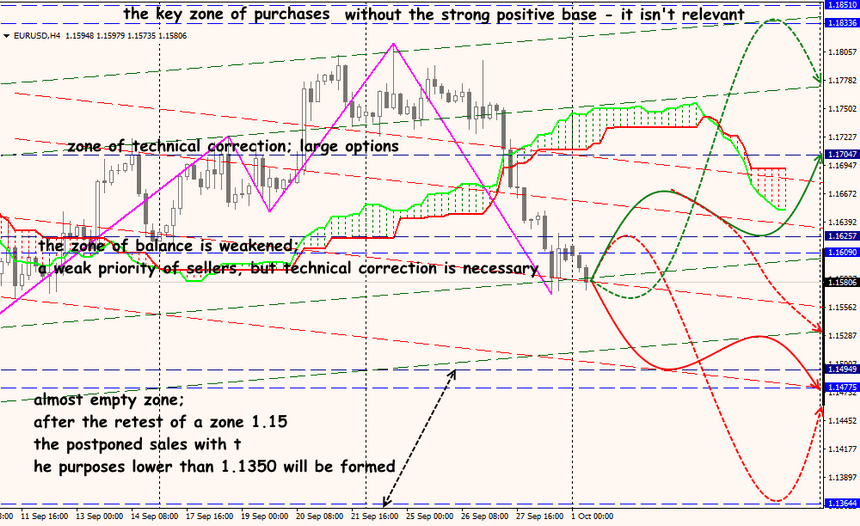 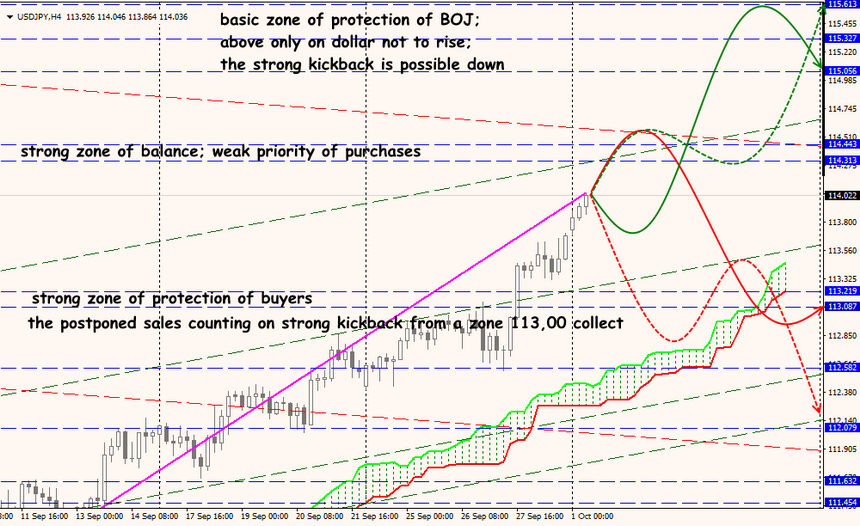