Otto von Bismarck's lessons for the markets and presidents

China has started the sale of state treasury bills of the USA; Trump remains the reason for the conflicts and market events, and opponents of the USA begin to build the new system of customs protection. Instead of the summer holiday, the market remains active and politized.

«It isn't difficult to ensure the peace at all, for this purpose it is necessary to hang editors of all newspapers». Trump's tweet comments couldn't compensate troubles because of a meeting with Putin in Helsinki. And though Trump considers that media had to call his behavior with Putin diplomacy, but not treason, the president had to endure several rounds of humiliating apologies before representatives of the Congress and security agencies. On leveling of the international negative from the unreasonable behavior of the leader − president, all forces of analysts and politicians have been made active.

«It is more dangerous to turn back, than to go forward». Trump subjected to active criticism the interest rate increase by FRS, having broken tradition of the White House to avoid comments on monetary policy in a tribute of independence of the Central Bank of the USA. History with Johnson and Nixon whose intervention in the activity of FRS caused uncontrolled inflation does not confuse the president. Trump already found the candidate for a role of a whipping boy if the current trade and tax policy will not be crowned with success.

During the current presidency a rate raised already 5 times, and now Powell unexpectedly appeared in a difficult situation before a meeting on 31 July. The markets are sure of the next increase in a rate for 0,25 points and to be developed already late. In this case, Mnuchin had to apologize: on the summit sidelines in Buenos Aires he tried to convince the markets that the president does not try to interfere with monetary policy. Panic managed to be avoided, but we watch closely this situation.

«Never be at war on two fronts». China actively devaluates yuan, and trade wars remain a painful point for investors. Trump accused China, the EU and Japan of manipulations with exchange rates and interest rates for providing competitive advantage though he said that he realizes irrelevance the of comments. The American government bonds fell, and investors began the mass elimination of long positions on the dollar. There is no break on trade negotiations of the USA and China yet, and chances of prevention of full-scale trade war catastrophically decrease. Besides, current week European Commission representatives will meet Trump in Washington: the announcement of potential countermeasures on the introduction of the customs duties on import of the European cars is possible. In case of sharp comments following the results of a meeting, euro can seriously suffer.

«While one sleep, others divide the world among themselves». The EU and Japan signed the bilateral trade agreement about the creation of the largest free trade zone. According to it the countries to which share about 30% of world GDP fall liquidate 99% of the existing customs tariffs. It will allow both the Japanese and European producers to save about €1 billion annually.

President, «discomfortable» for most of participants. In the final communique, it is noted that global economic growth was steady, unemployment remains low, but the strengthening of trade and geopolitical tension risks to break global growth and have called for dialogue expansion.

«Never lie so much, as during the war, after hunting and before elections». The July meeting of the ECB is going through, changes of policy for rates aren't expected, but the set of questions has collected to Draghi. The insider from influential figures of the ECB claims that after the termination of the program euroQE the Central Bank in case of reinvestments intends to place emphasis on purchases of long-term state treasury bills of the countries of the Eurozone in order that it is longest to keep big balance. It is quite difficult to deny this information.

Last week officials of Italy met Draghi concerning the extension of the mandate of the ECB. The Italian offers, in particular, of interventions on the currency and debt markets, contradict the international obligations of the countries of the Eurozone and it is necessary to expect Draghi's questions on this subject. So we listen carefully to a press conference on Thursday, and after the meeting traditional leakage of the insider and a performance of hawks of the ECB on Friday is possible.

The current week we pay attention to GDP of the USA, data on the sector of the real estate; but main are comments on pressure upon FRS because if Powell listens to Trump's opinion, then any economic data of the USA will lose sense.

On the Eurozone, it is worth tracing PMI of the industry and services for July and the IFO index of Germany. Trump meets Juncker on 25 July, the rhetoric is expected optimistical and, most likely, will support the euro. 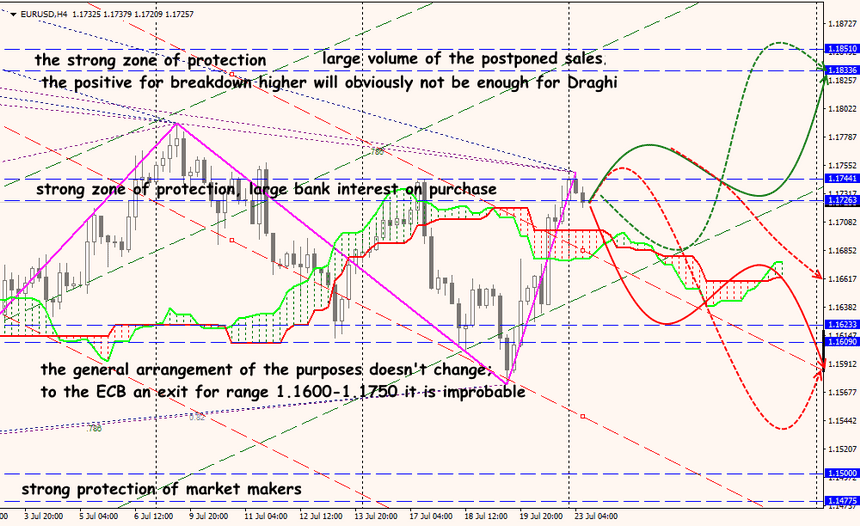 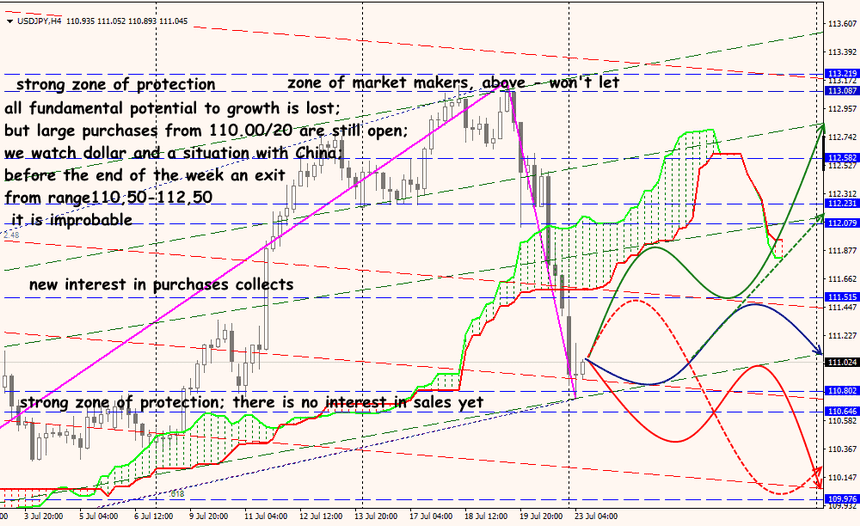