The destiny of the EU is decided in Italy. Trump opens the second front in a trade war.

Japan hints at a turn of monetary policy. Misunderstanding of common goals in the course of Brexit amplifies. Politicians begin to shake the markets actively.

Voting precincts in Italy were closed today at 11:00 (CET), the first exit polls show leadership of the coalition of Berlusconi (from 35,5-37% in the Senate and 35,0-38,5% in the Chamber of Deputies) that means the positive for euro strengthened by the resolving crisis in Germany and trade wars of Trump. However, while trust to this information weak, official data have to be announced till 14:00 (CET), the reaction of the market for euro will change in process of counting of votes.

Possibly, any of parties won't obtain necessary 40% and for the creation of the government, it is necessary to agree urgently. The country will have to go through a difficult path of forming a coalition with a possible bias towards populism. The Italian offerente have some time – the new parliament has to begin work on March 23. If these elections remove the threat of disintegration of the Eurozone because of Italy, then euro will grow, at least, before Veidmann's beginning on a post of the head of the ECB.

Step by step Germany approaches the effective coalition: SDP party is ready for the formation of the union with the block of CDU/CSU of Merkel. The agreement on reforms of the Eurozone is planned to be settled at the summit of leaders of the EU on March 22-23, but information leakage can be earlier (the actual execution of the plan of reforms – not earlier than the beginning of summer).

Traditional insiders before a meeting of the ECB on 8 March said that shouldn't expect considerable changes. The decision will be corrected due to a political situation though need of monetary normalization of the ECB doesn't raise doubts. In case of favorable factors for euro, the Draghi`s rhetoric will be moderate and positive, first of all, concerning the growth of economy and achievement of the goal of inflation. In case of a negative result in Italy, any comments of Draghi won't have a strong influence on the market at all. The pound remained under the descending pressure as London considers unacceptable the Brexit option offered by European Commission which, in particular, assumed preservation of Northern Ireland in the Customs union with the EU.

Despite obvious lack of progress in negotiations, the May`s rhetoric on Friday looked quite reasonable. Most likely, Britain will abandon the uniform market of the EU and the Customs union and also won't apply for certification which would provide easy access to banks of Britain on the market of financial services of the EU. Options of the agreement based on an example of Canada or Norway also don't arrange the Prime Minister.

The decision on a transition period of the Brexit will be passed at the summit on 22-23 March, but today political leaders of the EU should make the choice between fear, greed and prudence. Financial euro interests should win therefore there is a chance that finally persistently resisting Britain will receive a maximum from possible.

Trump has reported that the decision on implementation of 25% and 10% duties on steel import and aluminum will be officially announced current week. The head of European Commission Jean-Claude Juncker has already said that Europe will take the answer-back measures according to rules of the WTO to balance a situation. The fastest price reaction is expected from China, but if Canada and Mexico don't receive a release from an increase in duties within the trade agreement of NAFTA, then the crisis to the American industrial market within 2-3 months is guaranteed.

It is interesting that increase in duties was actively opposed by large officials of the USA (in particular, Mnuchin, Cohn, Tillerson), but, according to rumors, Trump has made this decision suddenly, without coordination, against the background of «nervous discontent» with investigation of Mueller and shifts in the White House. The statement of the president has led to escape from risk, the yield on state treasury bills of the USA have decreased, the dollar has fallen against funding currencies. As a result, Trump didn't hide the rage in the evening of Thursday after a collapse of the stock market, but the reason for this situation, he, apparently, hasn't understood.

The set of performances of members of FRS is expected. We remind: March NFP is postponed to March 9: the reaction of investors depends on an outcome of the previous fundamental events. This report is especially important for the analysis of reaction to a meeting of FRS on 21 March. The head of the Federal Reserve Powell has said that «any» natural unemployment rate is allowed (reasonably – from 3,5% to 5%), that is the probability of revision of a planned target towards reduction is high. The falling of unemployment rate below 4% will follow the growth of dollar.

And there is a little more interesting:

Current week, in addition to NFP, regarding the USA it is worth tracing ISM services, the report of ADP; regarding the Eurozone − PMI services for February and also regarding Britain: PMI services (today) and trade balance on Friday. In the light of trade outbursts of Trump and sharp falling of PMI of the industry of China we pay attention to the Chinese statistics: today – PMI remains, on Thursday − trade balance and on Friday − the report on inflation. The week will be difficult, and not only for the ECB, but also for RBA, BOJ and also the Bank of Canada – we study all comments and decisions of the Central Banks attentively. 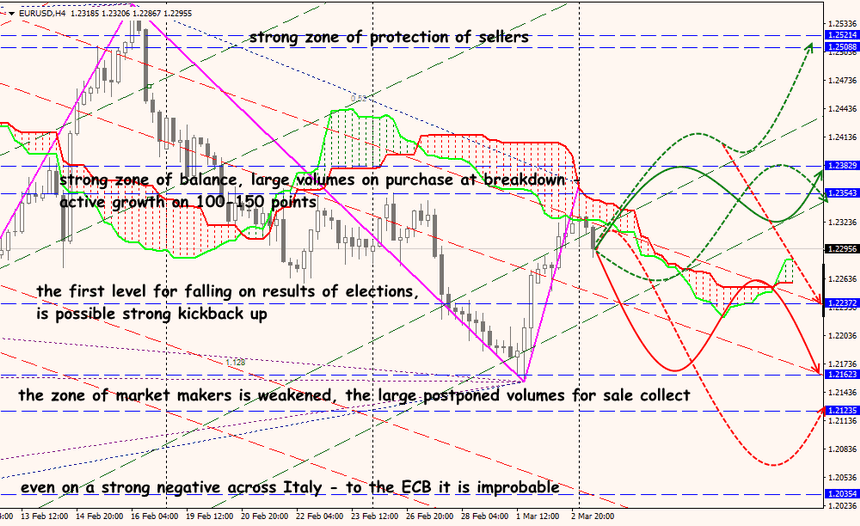 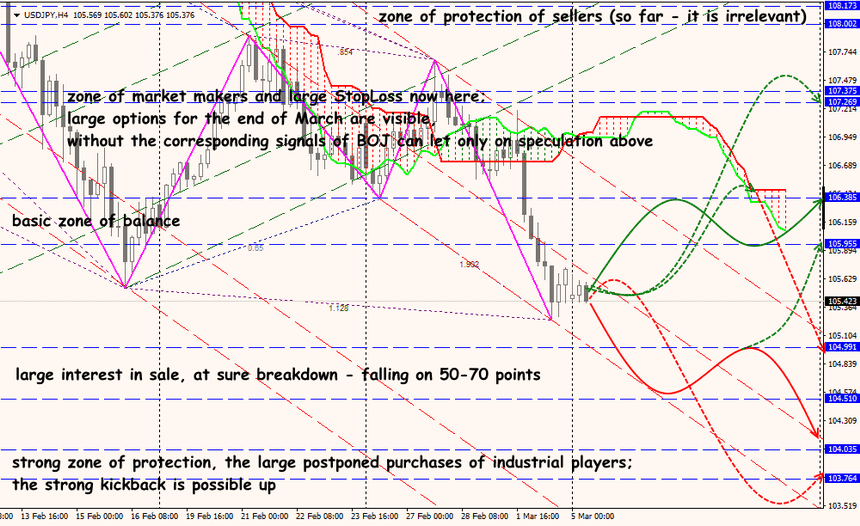