The G20 summit is taken place; China and the USA reached compromise.

FRS bargains with Trump; Italy weakens, but threatens. Brexit waits for the result of a local parliamentary fight.

The final communique is crowded with the purposes on the future and practically does not contain a reasonable assessment of the present. It is supposed to fight against unemployment, to influence on the factors of migration and climatic crises, and at last, to undertake reform of the WTO which actively demands the USA − it is necessary to present specific proposals to the next meeting in Japan. The international action plan for the fight against corruption and measures of counteraction to information terrorism is also approved.

It is indicative that there is no word about the condemnation of protectionism and the importance of multilateral trade agreements in the document that it is possible to consider the political success of Trump. The most important results of unofficial negotiations were not voiced, but their influence will hardly manage to fulfill the market until the end of the current year.

Trump signed the new North American agreement USMCA though Trudeau said that still, it is necessary to work on the key moments of the agreement. Assessment by Trump of trade negotiations with the EU is still unknown, the EU especially is afraid of an increase in duties of the USA for export of a car so car makers of Germany will hold a meeting with officials of the administration of Trump on Tuesday. After this meeting leakage of info is logical at least.

The protocol appeared pigeon, but speculators fulfilled the ideas day earlier. The rhetorician Powell has led to the sharp revaluation of market expectations on rates of increase in rates. The growth of the dollar was strengthened by flows of the credit capital at the end of the month.

Sharp change of FRS`s rhetoric is connected with the falling of the stock market, deceleration in some sectors of the economy, to the existence of risks from a trade war with China and effects of Brexit. The range of a neutral rate which the head of the Federal Reserve determined as 2.5%-3.5% «is too wide» for the market especially as the consequences of gradual increase are assessed now by it as «indefinite».

Effective «underground» work of Mnuchin is obviously visible who suggested to be focused on the reduction of balance of FRS instead of growth of rates and to fix a rate at the level of 2.5%. In general, Powell's statement looks a certain compromise between FRS and Trump. Possibly, the cycle of increase will be stopped in the spring-summer of 2019, and further, the subject of rates will not be used before new elections (November 2020). At the moment for the full reaction, the dollar will prefer to wait for the publication NFP taking into account the reached positive with China.

FRS at a meeting on 19 December by drawing up forecasts for rates of increase in rates will consider the stability of growth of salaries and falling of unemployment rates.

Next truce: Trump and Xi Jinping reached consent on the beginning of constructive negotiations on trade. The increase in the customs duties planned for January 1 will be postponed for 90 days, in the absence of progress in negotiations taxes of the USA will be raised from 10% to 25% for all import of China.

In exchange, Beijing undertakes to start reduction of a trade imbalance between two countries and to import the «serious» volume of agricultural, industrial and other goods and also energy carriers from the USA. Besides, Xi Jinping promised to approve the merger of the Danish NXP by the American company Qualcomm and also to stop supply to the USA of some chemical medicines.

China will please with PMI remains on the morning of Monday and Wednesday.

The government of Italy agreed to reduce the budget deficit for 2019 up to 2.2% against 2.4% earlier, but the European Commission, all the same, considers decrease insufficient though the aspiration to negotiations is estimated positively. Within the G20 summit, Juncker and Conte held consultations on technical questions, and the Ministry of Finance of Italy Tria made one more attempt to convince members of European Commission of the forecasts.

If as a result, at least the partial compromise is reached, then penalties (and the beginning of reforms) can postpone until summer of 2019, but then Italy will have to correspond to more rigid budgetary indicators.

The parliament will begin a debate on December 4, vote on ratification is planned for the 11th. There are not enough voices for ratification that means a high risk of an exit from the EU without agreement; so large players put on the decline of the pound against the background of the panic comparable on the force with the crash of Lehman Brothers.

Though the EU states that change of the agreement is impossible, probability extension of the operation of Article 50 about the time of an exit of Britain from the EU with the continuation of negotiations is not excluded. But, as they say, «in for a penny, in for a pound», conditions of the new agreement can be even worse for Britain, and a concession on key questions, open border in Ireland in particular, will become impossible.

May is sure of ratification, but Cabinet of Ministers prepares for alternative options, such as rigid exit or entering into an agreement in «Norway +» style for which voices in parliament can be enough. Fights are coming seriously. The break current week is improbable, at best May will receive several additional votes that do repeat vote inevitable. We recommend paying attention to PMI of Britain in the sector of the industry and services with the publication on Monday and Wednesday respectively. Testimonies of the former lawyer of Trump Coen about communications of the President with the Russian Federation will give new acceleration to the investigation of the special prosecutor Mueller. It is very probable that Trump will have to pass through the threat of an impeachment of the lower house. Trump's statement to arrange to the government the next shutdown in case of lack of financing of construction of a wall on the border with Mexico very negatively for a dollar.

Powell will address an economic committee of the Senate on Wednesday in 15.15CET (and once again on Thursday); Draghi will talk on Wednesday about a topic of banking association of the Eurozone. SuperMario has a difficult task: it is necessary to sound the bases for the closing of the program euro QE at a meeting of the ECB on 13 December taking into account delay of growth of inflation and economy. Intermediate meetings of the ECB will take place on Wednesday and Thursday, we wait for a traditional portion of the insider. 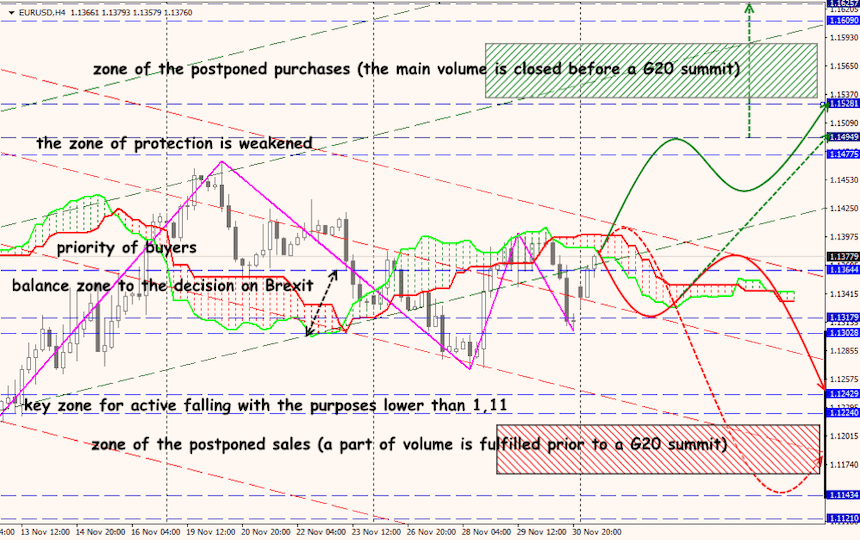 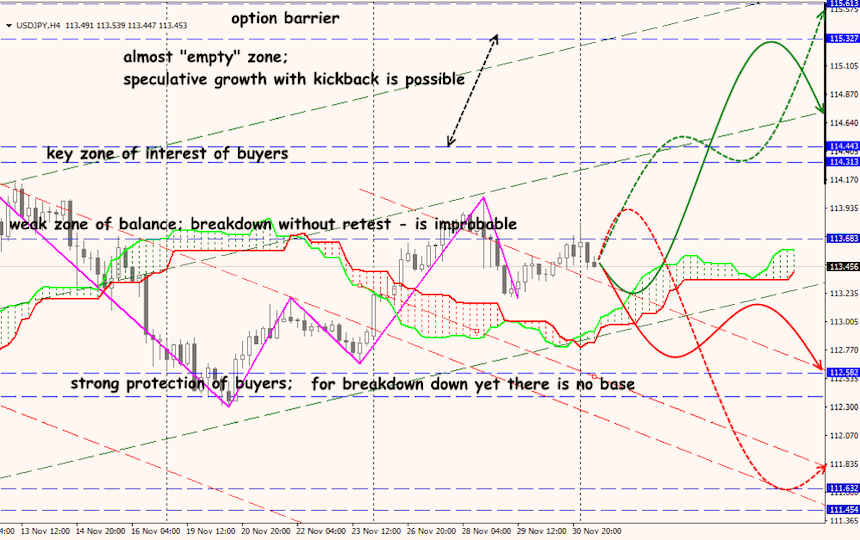