Market&Spiderman: whether Trump is ready to two-front war?

There is no fighting yet, but the markets teeter on the brink of a nervous breakdown.

The American report on work appeared below the forecast (traditionally – because of weather), but hasn't caused accidentin the markets, expectations on growth of rates of FRS have almost not changed, there are no fears concerning growth of economy of the USA. The positive can be considered growth of salaries, it is necessary to expect falling of unemployment rate in the next months.

Publication of the protocol of FRS on 11April:

At the current stage FRS can't give an assessment to negative consequences of trade wars − it is unprofitable for the Federal Reserve System politically and difficult without the relevant data. They may only to express concern. Reaction of the markets in many respects depends on the report on inflation for March which will leave several hours prior to the publication of the protocol. Additional, but still unaccounted factor is Trump's desire to cut down expenses of the government − to revise the bill of expenses signed two weeks ago so we watch news.

At the moment the USA-China trade war is generally shown in psychological intimidation of the opponent, real actions are planned not earlier than in two months. That didn't tell analytics, but Trump's order to the Ministry of Finance of the USA to develop the new list of goods for increase in duties on the sum of $100 billion looks rather reasonable − export of production of the USA to China last year was for the total amount of $130 billion whereas export of China to the USA − $505 billion.

The new package is aimed at hi-tech production with the purpose to influence PRC policy in the sphere of intellectual property. So the range of the American sanctions is much wider, and reciprocal actions of China are already limited. China may only blackmail America with sales of state treasury bills of the USA and appeals in the WTO.

There is no official schedule of trade negotiations of the USA and China yet; the stock market of both countries has already slightly suffered. At the moment obvious advantage on Trump's party: he intends to prove to Beijing that real negotiations with the USA aren't so terrible at all and can be constructive.

As the skilled manager, Trump at each stage will prefer to have no more than one enemy. For this reason he has refused one of the most deadlock questions (in the sphere of automobile industry) and now with high probability the NAFTA trade agreement will be issued during the summit on 13-15April. Negotiations with the Prime Minister Abe on 18 April have to fix support of Japan concerning purchases of state treasury bills of the USA in a situation if China after all begins their sale.

In Italy, as a result of the first round of consultations, it wasn't succeeded to reach agreements which could lead to formation of the coalition, but political chances of Di Maio increase. We will remind: his premiership guarantees to Italy preservation of membership in NATO, the EU and the Eurozone. The Democratic Party intends to go to opposition, but the coalition with «5 stars» can lead to a moderate positive for euro. In case of formation of the coalition by parties «5 stars» and North League risks will grow, euro will appear under pressure.

The ECB has accelerated purchases of corporate bonds within euroQE – the feeble attempt to calm the stock market which has begun to show nervousness as a result of growth of profitability. The economy of the Eurozone is slowed down, inflation doesn't show signs of growth, and on the horizon trade war of the USA with Germany is seen.

Draghi can give any positive signal to investors during the performance in Frankfurt on Wednesday, but there is not hinge to speak so far, time to start normalization of policy of the ECB is missed. It is already clear that process will take place slowly, at least, before the end of a term of office of Draghi. The protocol of the ECB with the publication on Thursday will reflect rhetoric which doesn't correspond to the current situation any more, but can frighten the markets.

PMI services of Britain has been released much lower than the forecast that has led to decrease in market expectations concerning increase in rates of BOE: Carney has again confirmed that the following increase in a rate will be logical after GDP of Britain leaves not lower than 1,5%. Nevertheless, after all it is necessary to raise a rate in May, but the subsequent increases under a big question.

Agreements on a transition period of Brexit remains the only positive at the moment, further progress isn't visible, negotiations on the new trade agreement with the EU are suspended as the issue on border with Ireland isn't resolved and now negotiations aren't even conducted. It is a little more news:

Trade wars will remain the main subject for the markets. From economic data of the current week the main data of the USA will be inflation of the prices of consumers, on the Eurozone − inflation in Germany for March and trade balance of Germany before Trump and Merkel's meeting on 27April. The trade balance of Britain with the publication on Wednesday and performances of members of BOE is of interest. Carney will perform with the next speech on Thursday evening.

From China we wait for the report on inflation in the Wednesday morning and the trade balance in the morning of Friday – balance should be analyzed in details regarding justice of claims of the USA. Performances of members of FRS are of the greatest interest after the publication on growth of inflation in the USA in March. 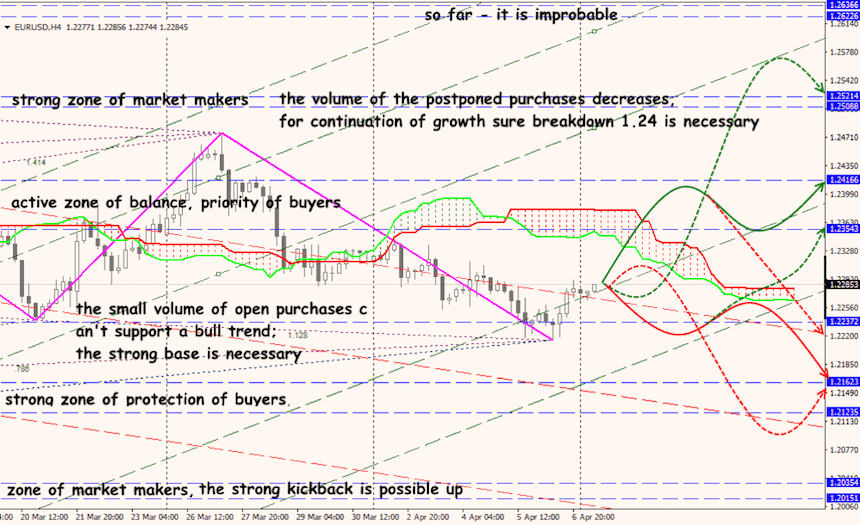 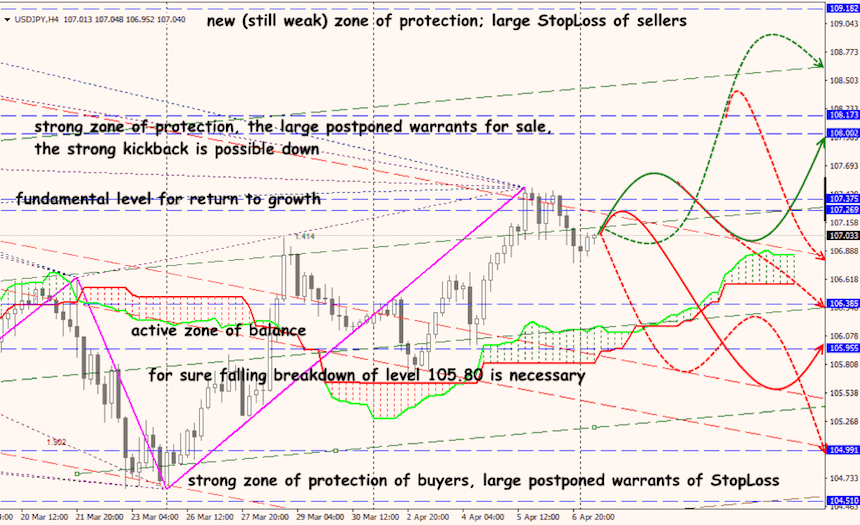