Local problems are solved, but we do not slow down the overall pace

The Fed adjusted the parameters according to the forecast, but in general FRS's rhetoric turned out to be hawkish. The assessment of economic growth is positive, there is a high rate of household expenditure, the assessment of the labour market and inflation has remained unchanged.

Powell believes that the FRS's current policy is appropriate and the three rate cuts implemented will give the US economy sufficient risk insurance, but politically the press conference, as always, has failed. Markets just like what the FRS does and it doesn't matter how Jay or anyone else calls the process. You can hardly trust a financial figure who knows how to change his mind too quickly at any negative for reputation.

Market expectations for a rate cut in the presidential election year fell slightly after the meeting and NFP publication but rose after a weak ISM industry report at the close of the week. At this stage, the FRS is clearly not the most important market driver, China and another Trump impeachment remain priorities for short-term operations.

The October NFP came out perfectly strong given the strike General Motors, which took 46,000 workers revenge. The rise in unemployment is not considered negative, as it occurred against the background of the increase in participation in the labor force. The report confirmed the FRS 's decision to take a pause before further determining the rate direction.

The British Parliament ratified the Government 's Early Elections Bill on 12 December; the EU extended Article 50 on the release date until 31 January, with commemoratives with the Brexit date sent back for melting again. The dynamics of the pound, at least until 12 December, will be influenced by the results of polls on the ratings of Britain 's parties.

Johnson is already acting like a winner. Tory priority is considered the most likely outcome, which could cause the pound to rise into the 1.4000 zone and the euro to rise above 1.20, but that may well be hampered by Trump 's decision on EU auto import duties. For Britain as a whole, the optimal outcome would be a Conservative victory by a margin of 40-50 seats, which would allow for the completion of the Brexit procedure and the implementation of incentive fiscal measures. The negative result appears to be a situation in which neither party receives a decisive majority in Parliament, which could lead to the formation of an unsustainable coalition between Labour, the Liberal Democrats, and the Scottish National Party. It is possible that Johnson and Farage will unite following the election.

BOE meeting is working, correction of policy is extremely improbable before elections, Carney will leave a post at the end of the current year, and at Johnson's victory Nemat Shafik (the director of London School of Economics now) will probably become the head of the Central Bank. We pay special attention to tomorrow 's service PMI report.

And a little more news - briefly:

Obviously they are preparing to buy oil on the downsides in anticipation of the US-China agreement. OPEC will publish its world forecast for major commodities tomorrow.

Trade balance, ISM of services, productivity and labor costs for the third quarter will be the main statistics for the United States this week; regarding the Eurozone, we pay attention to the PMI of industry and services and the new economic forecasts of the European Commission. Today (20.30 CET) Lagarde will deliver his first speech as the head of the ECB. The subject of the speech does not address the prospects for ECB monetary policy and the Eurozone economy. The ECB Forum on Banking Supervision will be held in Frankfurt on 6 November, waiting for an insider from the new leadership.

China publishes the remaining PMI tomorrow and the trade balance on Friday, but the renminbi is not yet rising fast enough to inspire confidence in the positive outcome of the US-China trade negotiations. 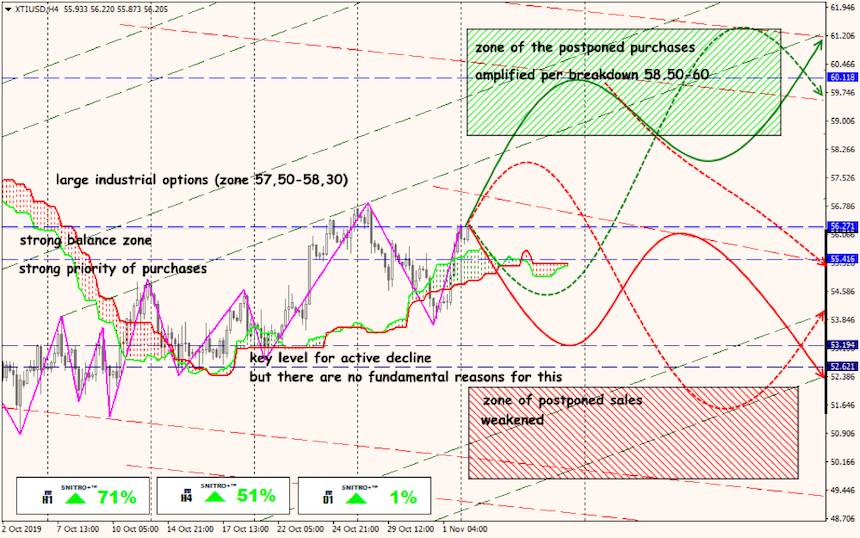