Protocols of FRS and ECB have been equally aggressive; China presses Yuan for the dollar.

Europe stood waiting for the Italian and German news. Open week prepares the markets for the strong movements after the events in Italy and to vote of SDP party on 4 March.

The protocol of FRS looks more aggressive concerning revising of forecasts for growth of the economy and, as a result, level of the growth of increase rates. The changeover of a discussion about the change of a target reference point of FRS on inflation on a subject about the possible growth of a neutral rate of FRS is remarkable. Most likely, it is connected to change of the head of the Federal Reserve and emphasizes Powell's readiness to continue the Yellen`s policy. At the current stage, FRS plans to show caution cause not to allow sharp revising of forecasts for an increase in rates and not to provoke a sharp response of the markets. Influence of tax reform on the growth of the economy of the USA is still estimated as indefinite, nevertheless, the debt market of the USA continued falling after an output of the protocol of FRS.

Current week focus of attention of investors displaces on Powell's performance before the Congress, on 27 February and on 1 March in 16.00 CET – its personal judgement on perspectives of a monetary policy of FRS still remains a riddle. It can be understood: it is hardly to be between the interests of the president and the aggressive markets. Powell got too hawkish membership of FRS and hardly he will find enough supporters in the desire to postpone the increase in rates or to stop abbreviation of balance. So you may expect extremely neutral tonality of a performance. Trump is going to watch closely dynamics of the stock market during Powell's performance and if the stock market falls the meeting with the angered Donnie is to accur to the head of the Federal Reserve. The protocol of the ECB unexpectedly was hawkish, the probability of rigid changes in a policy at a meeting on 8 March gradually grows. Draghi will address European Parliament today (15.00 CET), but irrespective of its tonality euro will be under the descending pressure up to 4 March, and then, in case of favourable totals, all movement will win back wholesale. Since Thursday in the ECB «week of silence» will begin which, however, except Draghi, nobody observes.

All key events are offset by the end of the week.

The parliamentary elections of Italy which are coming on 4 March have no options of the good final for the future of the Eurozone, the only question is how negative will be the result. On elections, only one pro-European party is provided a − democratic party of Renzi, but also its program provides negotiations with the EU on change of agreements on rules of budget deficit towards loosening.

Influence of result of the Italian elections is extremely big.

In case of formation of the coalition with pro-European party of Renzi, it is possible to forget till 2020 about possible crisis against the background of growth of chances of the disintegration of the Eurozone.

A coalition of “5 stars” and “North League” parties: the most negative option for the Eurozone and euro, holding a referendum is almost inevitable. When forming the government by Berlusconi`s and Salvini`s parties the euro will be under pressure before clarification of intentions concerning holding a referendum; when merging parties “5 stars” and “North League” the euro will go to the descending dive.

The SDP party of Germany from 20 February to 2 March takes a closed vote on the formation of the coalition with Merkel's block of CDU/CSU. Results will be sounded on 4 March. At the case of consent of SDP to the formation of the coalition government with the Merkel`s block the euro has to receive a boost to growth, however, it is necessary to consider the result of elections in Italy. The probability of refusal of most of the members of the SDP party against the coalition still remains, banks estimate such risk at 35-40%.

May plans to announce on 2 March the vision of Britain regarding the scenario of an exit from the EU. The optimal option of Brexit hasn't found support in the English Cabinet of Ministers, but the agreement has been reached on a strategic objective in the form of the new trade agreement in EC+ Canada style, but which will be more expanded and has received the name «Canada +++». It isn't enough the positive in it, but in comparison with the idea of a full cancellation of a transition period – it is already quite good. At the summit of leaders of the EU on 22 March, the signing of the agreement on a transition period and elaboration of strategy under the new trade agreement is planned.

We remind: the opening of the markets will be on 5 March with a gap in any situation, therefore, we strongly recommend to close all short-term positions on Friday. 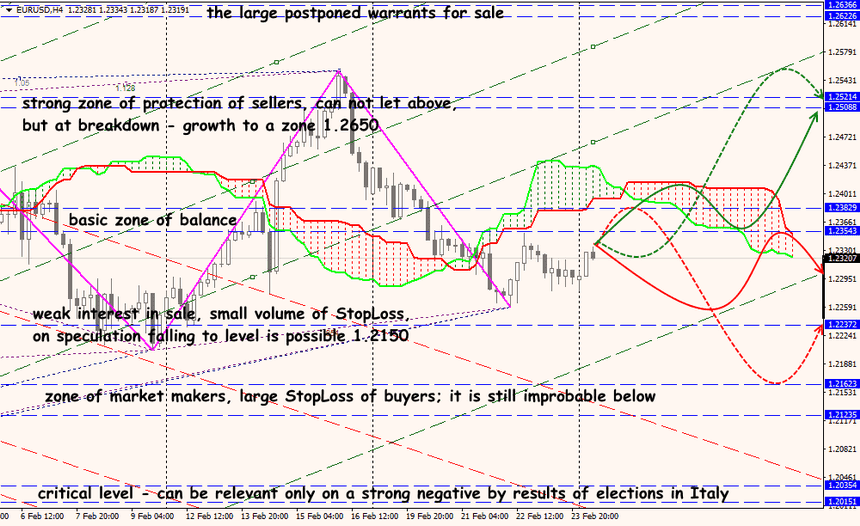 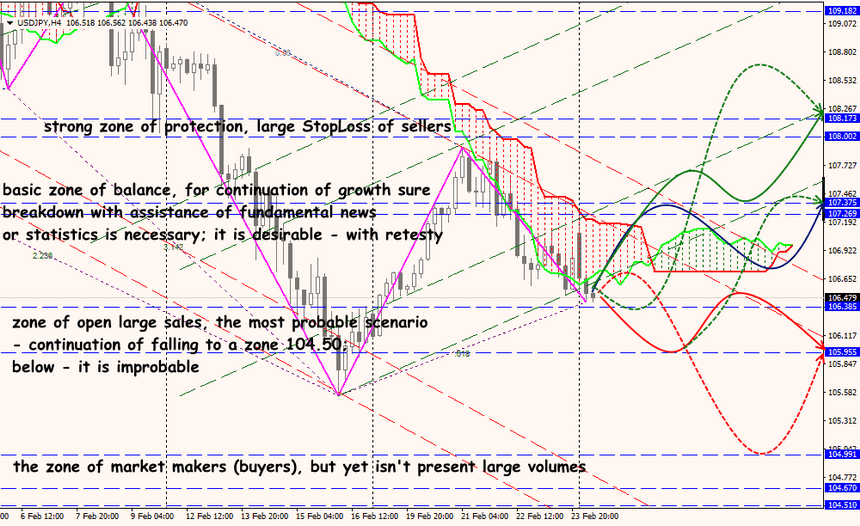