Gifts are accepted, turkeys are eaten: the market prepares for the last fight

The yen − threatens, the pound – grows, oil – speculates.The leaving week was completely negative for dollar and positive for euro.

Players opened the last prior to New Year trade and active period.

In November dollar could not develop the success and I fell to a five-week minimum against baskets of currencies as investors with optimism looked at the strengthening of the economy of the eurozone and lost interest in the USA. The last protocol of FRS differs in style of discussion: obviously, Yellen allowed Powell to be trained in new quality that was reflected in the discussion course.

It is noted from a positive: improvement of trade balance; one more increase in a rate is economically justified; labor market keep growing; we wait for the growth of inflation in the medium term; hurricanes «have passed by» basic indicators of the economy.

The statement for the beginning of a discussion concerning the potential change of the mandate of FRS on inflation from the current level of 2% became a negative. It is obvious that the policy of FRS under the leadership of Powell will be more pigeon. The revision of forecasts for decrease will be especially relevant in case of lack of a positive on tax reform in the Congress.

Performances of officials of the Federal Reserve System will continue to irritate the markets, a special interest will be attracted by the approval of Powell on a post of the head of FRS by the Senate (on Tuesday, the beginning in 15.45 CET). Powell's opinion concerning increase in rates, especially in case of acceptance of tax reform, is capable to lead to a strong reaction of the markets.

The European capitals − favorite food of the American share wolves – actively «go» to America until Merkel is busy with parliamentary problems. Today from any party in Germany certain sacrifices are required and socialists already discuss a possibility of a return to a grand coalition. The party will be going to the congress in the next two weeks to submit the road map for the formation of the government. Green have also expressed active support.

Germany has enough chances of the settlement of the crisis. Schultz has said that the decision on the coalition with Merkel's party will be made, of course, the requirement of the introduction of euro bonds won't become an emergency condition of the political union. Rumors about Schultz's resignation at a congress on December 7-9 because of failure results of elections, then Sigmar Gabriel, with whom Merkel has old good relations, can lead SDP party. A basic event (and for euro in general!) there will be a joint meeting on November 30 of the president of Germany Steinmeier with leaders of parties, however, the strong growth of euro on this subject is still improbable.

Until the end of the year, euro is in direct dependence on data on the growth of inflation in the Eurozone. The protocol of the ECB did not contain former fears concerning the growth of euro exchange rate, extension euroQE after September 2018 will be purely symbolical. So far only the active growth of economic indices and problem dollar can push euro up.

The question of resignation of the British prime minister is almost removed from the agenda. May got the support of the Cabinet of Ministers on doubling of payment of the EU «for a divorce» to €45 billion that shall activate negotiations. It is planned to coordinate the main details with the technical group to 1 December, May intends to submit the final document to Tusk and Juncker at supper on December 4 that potentially will open a possibility of transition to the second level of negotiations at the summit of leaders of the EU on 14-15 December.

The forthcoming week it is worth tracing GDP of the USA for the 3rd quarter, data on inflations of consumer expenses, ISM of the industry, and, certainly, the Beige Book; on the Eurozone − preliminary data on the growth of inflation in November, unemployment rate and PMI of the industry. China will please with the PMI on the morning of Thursday and Friday. Sanctions of the USA against DPRK were reflected in the companies of China that will aggravate economic problems and will accelerate crisis approach.

Mueller's investigation concerning Trump's team accelerates and presses on the political image of the president more and more. The vote on tax reform in the Senate of the USA will become the main event of the week (it is planned for Thursday). Democrats will try to break it by the introduction of a huge number of amendments therefore vote can take place on the morning of Friday. The voice of the vice-president Mike Pence will become decisive again. Trump will hold a meeting with Republicans in the Senate on Tuesday that he will be convinced available voices pro: if there aren't enough voices they will make changes to the bill, vote will be transferred to later term that will become a negative for the stock market, profitability of state treasury bills of the USA and dollar in general. We listen carefully and trade – carefully. 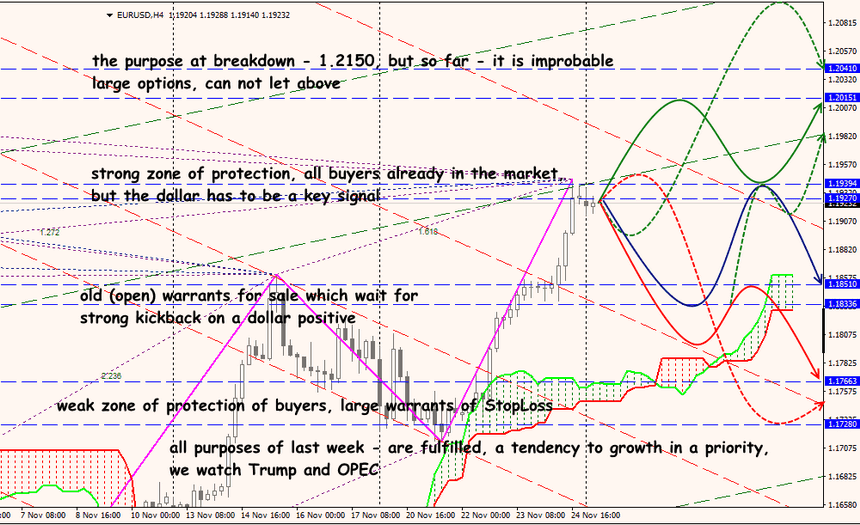 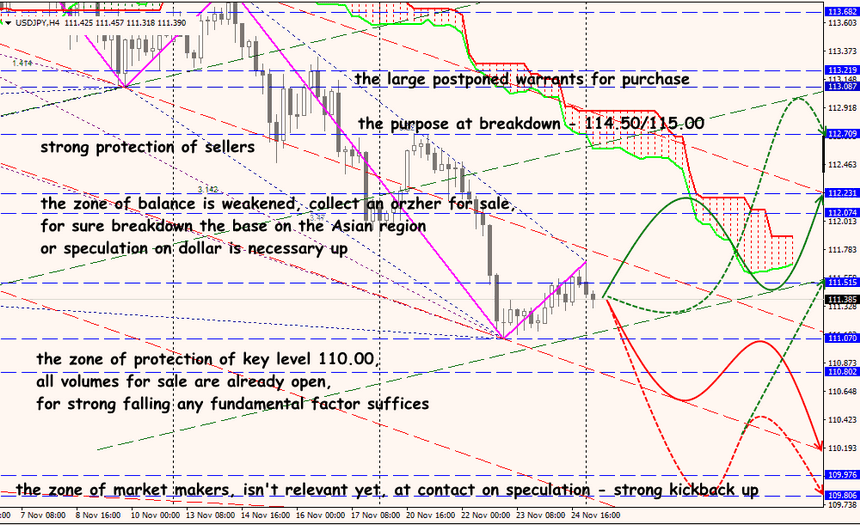