Oil blackmail continues; Trump puts ultimatums to the world; the NATO summit has confirmed the rates in the fight against the expansion of the USA.

Japan is ready to agree, and China prepares backstroke.

The aggressive criticism of the EU policy on NATO and demands to immediately increase a defense expenditure to 2% (and even better to 4%) of the GDP has only closed ranks of world resistance against Trump. Advertizing threats towards Germany have received the worthy answer of Merkel with the active support of Macron and have again impaired a little reputation to the U.S. President.

Frau Angela has reminded Trump that, particularly, Europe protects the safety of the USA (read between lines − «and we still have to pay for it?!»). Besides, the large-scale input of duties from the USA became an excellent reason for Germany and the People's Republic of China to declare the general commitment to the multilateral trade system. Only for the last year direct trade contracts between the Chinese and German business have exceeded €20 billion and the business activity in this direction increases. Especially as China needs allies much stronger now than Germany; now we wait, what the USA will answer.

Analysts have estimated neutrally the report on monetary policy of the USA, despite his «super positive» figures. Inflation of the consumer prices in the USA came out the level of the forecast, and inflationary expectations in the Michigan version have decreased therefore it is logical to expect that market expectations have already taken place a summer maximum and begin to decrease.

Last week Big Jay has given, probably, the first full-fledged interview from the moment of taking office. He issued information small doses, but the key moment can be considered the statement that trade policy of the administration of Trump doesn't belong to a policy of FRS, the Federal Reserve System still considers signals to action only decisions of the Congress. If Trump's administration achieves the objectives in a decrease in world duties and a decrease in trade barriers – it won't be required special efforts from FRS. In case of Trump's failure, FRS is ready to make difficult decisions which schemes aren't even developed so far. There is no clear idea of the influence of trade wars on the American economy and FRS yet.

Powell will carry out a round of answers to questions of senators (on 17 July) and congressmen (on 18 July); the opening speech for both chambers is identical and will be published for an hour and a half before in the first day of hearings. We recommend to study the text attentively and comments to him too. The yen has shown the worst week for itself for the last 10 months as demand for Asian assets has sharply fallen and the difference in interest rates actively adds a negative. The Bank of Japan continued the regular direct purchases of bonds without change of parameters.

Supply of the Iranian oil to the Asian region can appear under the threat before the deadline on 4 November designated by the USA. Japan will suffer one of the first: the last shipment for it is expected in September if only Tokyo isn't possible to get from the USA any concessions in this question. Difficulties with July deliveries because of problems in the sector of insurance of tankers and a freight have already begun for South Korea. Some Taiwan oil refineries prepare for the termination of purchases of the Iranian oil.

Trade war develops according to the plan. The following increase in duties of the USA of $16 billion on the production of China will come into force on 20 July and though officials contradict each other in a subject of renewal of bilateral negotiations, China is obviously ready to answer with adequate measures. The surplus of the trade balance in the advantage of China has reached historical max that supports Trump's intentions to resist, at least, prior to the catastrophic falling of the stock market. A point of a non-return will become on 30 August when the USA expects to raise taxes on the volume of goods of $200 billion, and China won't be able to answer with similar countermeasures – all export of production of the USA to China less on volume. Then Beijing has last chance – the sale of state treasury bills of the USA and threat of new global crisis won't stop him. China continues to devaluate yuan. Today's morning statistics of China can be regarded as positive.

Negotiations on the trade of the USA with the EU will begin on 25 July and if the EU doesn't show «good will», then not to avoid increases in duties on cars of the EU.

Key figures continue to leave the process of Brexit – as result of inner-party blackmail May accepted Davies and Johnson's resignation; and on Friday Trump criticized lady Prime Minister and said that in case of too «soft» Brexit trade agreement between the USA and Britain will be impossible.

However, after the personal meeting with May, Donald had to refuse publicly on these threats that it helped pound to be corrected slightly. The forthcoming week will be key: the EU has to disclose the answer to the new British plan stated in the Brexit White book − the most «democratic» option which plans preservation of close ties of the EU and Britain. Economic data will format expectations of the market on increase in a rate of BoE at a meeting in August, we wait for data on the labor market, the report on the growth of inflation and retails. But if May's government stands and the EU gives a positive on the Brexit, then the pound will receive a strong incentive for growth, irrespective of statistics.

Current week retails, the production index of FRB of Philadelphia and reports on the sector of construction of the USA will be a specification of the USA; on the Eurozone, it is necessary to monitor inflation of the consumer prices for June and reports of the SP500 companies for the second quarter. At the beginning of a week the attention will be riveted on Trump and Putin's meeting, and by the end of the week, it is necessary to expect growth of concern about trade wars in the absence of a resumption of negotiations of the USA and China. 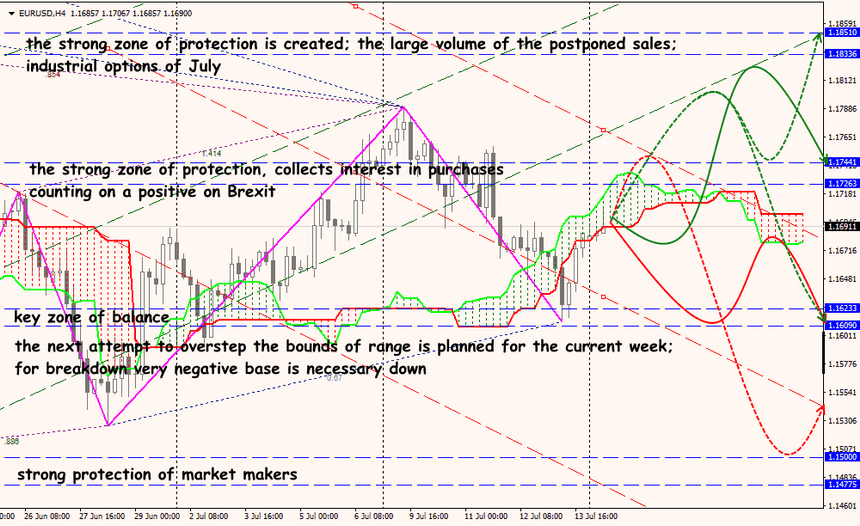 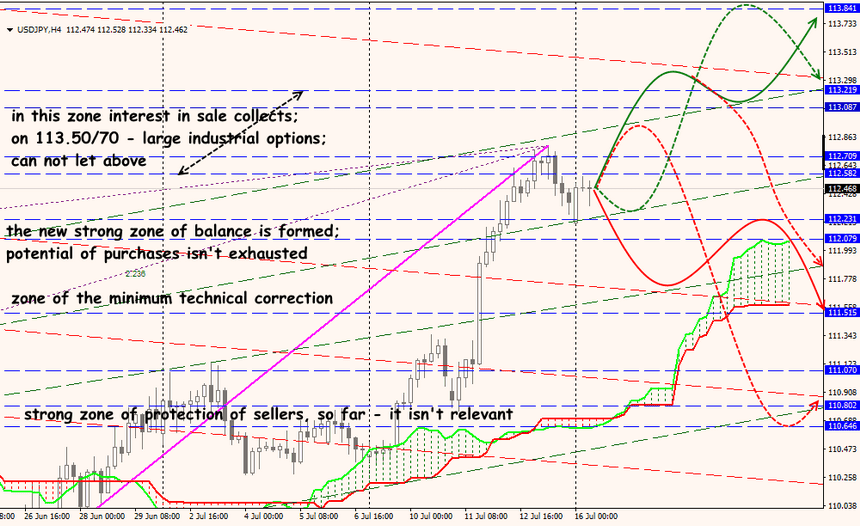