Week of the European choice: the bargaining continues

May results of NFP have again collapsed dollar; Trump introduces the trade habits in foreign policy; France and Britain fade in the run-up to the parliamentary elections.

Despite arrangements of the Secretary of State and daughter adviser, an exit of the USA out of the Parisian agreement on climate is officially declared. It demands, at least, renewal of the contract on other conditions while three European whales (Germany/France/Italy) have rigidly declared that terms of agreement can't be reconsidered. Moreover, the American states headed by Democrats have declared that they are ready and to adhere to the Parisian agreement further. According to Trump feeling as «the president of the world» and daring to give comments on trade surplus of Germany, such decision will allow creating 2.7 million jobs in the USA and will provide fast development of the American slate branch. This news has already led to a reduction of prices of oil almost for $2.5.

NFP have dispersed from preliminary data from ADP: it has appeared that they are below the forecast, and lack of growth of salaries became the main disappointment. Nevertheless, FRS considers this report the next evidence of achievement by labor market of full employment. Decrease in unemployment rate has happened because of falling of participation in labor, it is demographic factor and FRS doesn't influence it in any way, but, most likely, this fact will force the Federal Reserve to affect an advancing, having raised a rate at a meeting on June 14 in the absence of falling of the stock market of the USA.

It would be possible to postpone such decision until September if not the fiscal policy of Trump capable of increasing sharply the rate of inflation and to lead to loss of control of FRS over an economic situation. It is already clear that the government and Trump don't meet those high expectations that are put in today's prices in the stock market. These days dynamics of state treasury bills of the USA and dollar exchange rate directly depend on the speed of normalization of discount rates. At the same time, the Ministry of Finance of the USA in the person of Steve Mnuchin is sure that the Treasury will get the approval of a new limit of a national debt without problems.

The key point of the week, certainly, will become on June 8 – the ECB and elections in Britain.

GDP of the EU grows 16 quarters in a row, preliminary data on the eurozone have specified on the decrease of the inflation rate in May, falling of basic inflation (in recalculation in a year) to 0,9% against 1,2% became especially strong. At a meeting on June 8 change of rates and the size of the evroQE program isn't expected, Draghi is appointed the lead character again, who already publicly recognized positive changes in euro economy. If the ECB recognizes risks of development balanced but will leave formulations about the decrease in rates and the increase in the size of the QE program, then euro will sharply fall (with the subsequent kickback). If the ECB excludes from the program the formulation «about the decrease in rates if necessary», but will leave the formulation about the increase in the size of the QE program − it will be possible to sell euro in short-term on growth. Euro exchange rate already has considerably become stronger after Macron's victory, but at the refusal of both formulations growth will continue and will restrain only verbal art of Draghi before and after a press conference. Anyway, toughening of the policy of the ECB will begin not earlier than fall that is already considered by a current rate.

In the run-up to the parliamentary elections, the pound is under pressure after terrorist attacks and feeble attempts of the government to cope with a situation, but explosions and contradictory results of the first quarter actually haven't affected the behavior of investors in any way. Whatever occurred in Britain today, it only promotes inflow of foreign investments. A number of funds have reported on the considerable inflow of portfolio investments, the cheap currency returns interest of investors in the real estate and in a manufacturing sector, and the main risks are connected with the policy of the Scottish Parliament, and also the current state of health care and the pension funds.

Despite the drop in the rating of the May`s party, for the softer Brexit option it would be logical to conduct negotiations with her − in this regard it is necessary to monitor the reaction of the markets to result in elections and to remain extremely attentive and careful until the announcement of results.

The role of the savior of the EU and the Eurozone is already appointed to the young President of France, but for the value of a victory, the visibility of political war is necessary at least. Another poll of Opinionway has shown that on June 11 at parliamentary elections Macron's party will manage to receive the comfortable majority (335-355 places), but it is already obvious that Republican Party and Marine Le Pen`s succeed to the second round, and Melenchon's party risks not to break a barrier in 12,5%.

The opening of the markets next Monday is expected with a gap for euro.


We also will note:

In FRS the silence period before a meeting on June 14 has begun, any performances shouldn't concern prospects of monetary policy. The European politicians dare not to constrain themselves before meetings of the European Central Bank, their statements can be used as the insider for the best understanding of decisions on June 8.

Current week labor productivity and costs of labor, and also ISM of the service sector will become the main data on the USA; in Europe, it is worth paying attention to PMI services and a final assessment of GDP in 1 quarter, and also the British PMI of the service sector (on Monday). Fans of Asian assets can expect on the preservation of a neutrality of RBA (Tuesday) as from Oceania the quite good statistics continues to arrive.

Last week strengthening of yuan exchange rate against the background of deterioration in economic data has strongly puzzled the markets. We keep up with statistics − at the further falling of economy China can become the driver for the decrease in the world stock and raw markets. 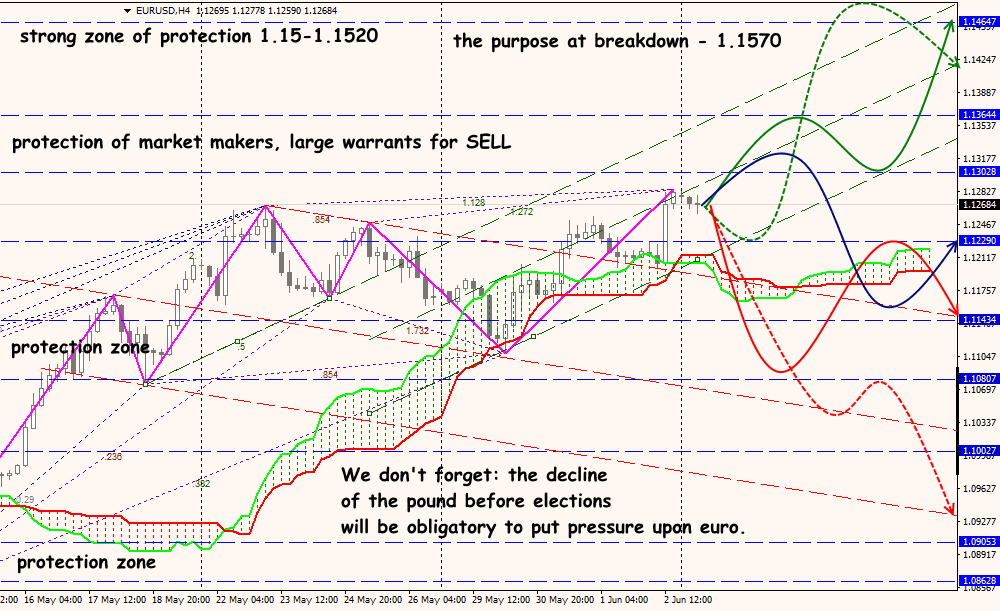 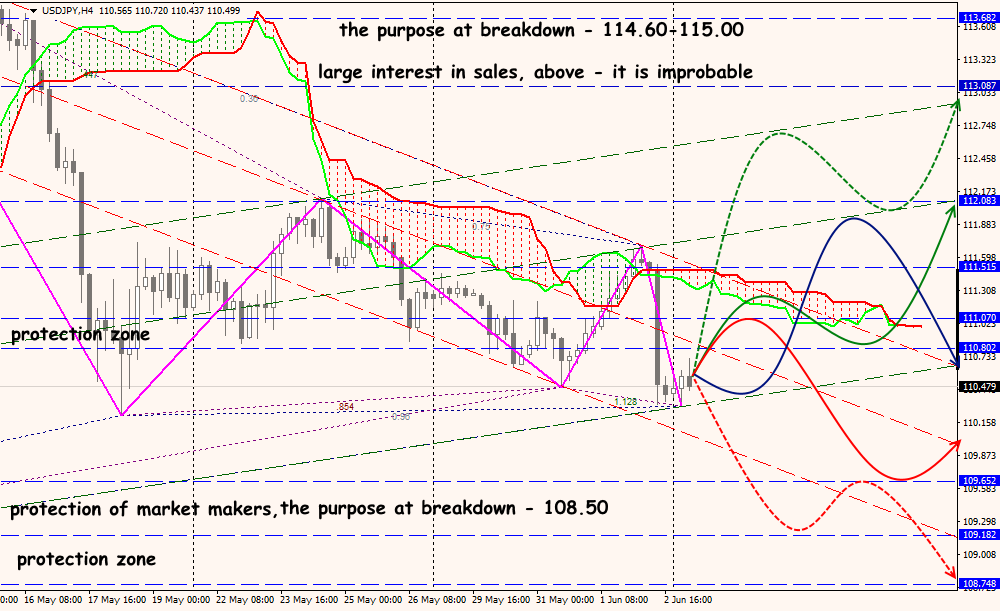