English topic or why the dollar loses growth incentives

The European market moves to the peace, American − to war, Asian – maneuvres attempting to receive a profit from any events.

Key points of the current market:

If a problem of the Irish border is to agree not only with the EU, but also with the British Unionists, then in the British parliament there will be enough voices for support of basic parameters of the agreement on Brexit. The basic agreement has to be reached prior to the next EU summit on October 17-18, the final decision, most likely, will postpone until November.

The EU on Wednesday plans to represent the offer on the expanded free trade zone. In the process of the conservative party congress, May made it clear that the UK would better leave the EU without any deal than on unfavorable conditions. If the prime minister feels that the EU proposal puts too much pressure on British interests, negotiations on Brexit may again be on the verge of failure.

If the insider that Britain is ready to the Customs union with the EU outside a transition period is confirmed, then the growth of pound will be steady for the next two weeks. So far, despite friendly statements from Tusk, the positive on pound looks as usual correction and active purchases aren't observed. The statistics block on Wednesday, especially data on growth rates of GDP, is of interest to analysts, but influences the current dynamics poorly.

The dollar lost a bullish momentum against the background of mixed data on the labor market, although it increased its advantage over commodity currencies. Reaction to NFP was weak though bulls on dollar obviously expected to strengthen the pressure, being guided by hawk statements of Powell. The report appeared steadily strong, has confirmed the growth of economy and labor market, but hasn't indicated inflation growth acceleration. The falling quantity of new jobs is connected with the influence of the hurricane Florence, expectations on the stable growth of salaries are increased. Record-breaking low unemployment (minimum since 1969) allows hoping for acceleration of rates of increase in a rate next year.

Forecasts of FRS assume that unemployment rate will close this year for 3,7%, and next year will fall up to 3,5%. However, the market has just preferred to record open positions and to wait for comments of FRS current week. Officials are concerned about rising inflation and the current week’s economic reports are likely to increase their fears.

Alas, weakening of the position of the dollar doesn't mean a strengthening of euro at all. Discussion of the Italian problems at a meeting of the Eurogroup has turned out aggressive, the draft budget of Italy is called unacceptable, contradicting the pact of the EU on stability. Junker has said that such budget will cause a crisis of a national debt of Italy, therefore, the country will need the long aid program in the Greek style. But the EU has no such money and, partly thanks to Trump, won't be in the nearest future.

After the repeated meeting of the Cabinet of Ministers of Italy indicators of the budget have been reconsidered, but the EU is all the same dissatisfied. Nevertheless, they have decided not to get into an open argument with Italians as Salvini and Di Maio use criticism of the EU for justification of the failures. Draghi on Wednesday has held a private meeting with the president of Italy Mattarella, but there is no positive, apparently.

The current week the subject of Italy will be minor, information background will abate a little before the official representation of the budget of Italy to the European Commission on 15 October. If Rome, after all, finds a common ground with European Commission, and S&P Fitch won't dump the rating of Italy to «the garbage level», euro will receive an incentive for growth.

Trump's theses are obviously assumed as a basis for a speech practically of all American diplomats.

The Vice President of the United States Pence has accused China of intervention in congressional elections of the USA. The answer of China will be more aggressive, the more supports will be got by Trump's party on 6 November. Trump and Xi Jinping's meeting isn't excluded during the G20 summit at the end of November, but the long-term strategy of war with the Asian monster to presidential elections of the 2020th is already declared.

At the current stage chances of achievement of the trade agreement between the USA and China paltry. Besides, Trump's administration has brought the USA out of two international agreements and will revise all agreements which enter the USA under the jurisdiction of the International Court of Justice that doesn't add points to a foreign policy of Trump at all.

Current week inflation of consumer prices of Germany will be the main economic data; comments of members of FRS will be interesting after the inflationary report of the USA on Thursday.

After the intermediate meeting of the ECB on Wednesday leakage of the insider about a probable change of basic policy since 1 January 2019 is possible; the protocol of the ECB on Thursday can be focused on risks for euro, but the impassioned reaction to the publication shouldn't wait. Draghi will be present at a meeting of the IMF and World Bank, spontaneous interviews and comments aren't excluded.

On Thursday we pay attention to the monthly report of OPEC, data on production volumes for September are especially interesting. Efforts of the EU in the rescue of Europe from the anti-Iranian sanctions haven't reached success so far, but after Trump's threats, there were statements for the closed transaction between Saudi Arabia and the Russian Federation about readiness to increase oil production if necessary. There are no details, but growth on the main assets has to slow down.

China enters the market after a Gold week today; abnormal volatility on Asian assets is possible, the liquidity will be low in connection with days off in Japan and the USA. Large banks expect a break of a mark 7,0 on yuan. PMI left positive this morning, trade balance we wait in the morning of Friday. 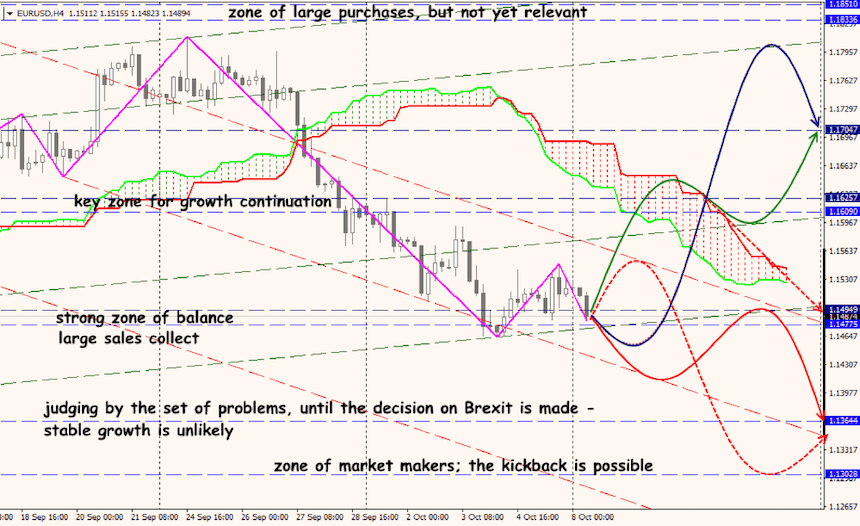 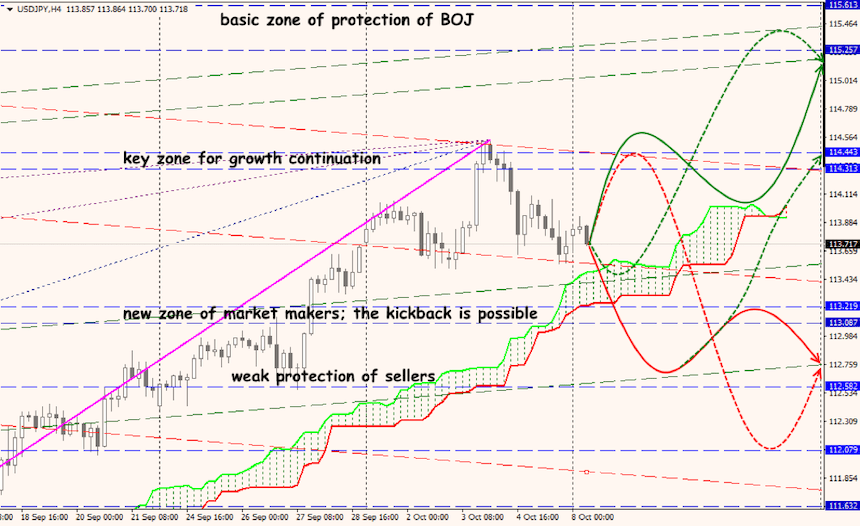