The dollar opened a week lower, but thanks to the politicians, we all have an active spring ahead.

All the pain points of market remain, but they are being offered a new treatment.

The upcoming meeting is the joker of the week. Insiders have long been talking about the ECB’s readiness to announce the launch of new rounds of LTROs and the market is waiting for formulations that guarantee stability of interest rates at least until the end of 2019 or until the 2nd quarter of 2020.

Alas, no decisive action is planned for the June meeting; Draghi will have to drag out time and switch attention to the growth of Eurozone's labor market and soft financial conditions. Euro regulator is very important to know the result of the elections to European Parliament at end of May, in order to understand who will succeed Mario as head of ECB. So far, Weidman’s chances are very high, and the head of Bundesbank has a pronounced hawkish look at the current policy of ECB and next steps will obviously have to be tightened.

Dynamics of euro depends on Draghi's assumptions concerning probable incentives. If Mario reports about an assignment to committees to development of incentives – euro waits for moderate decrease, the scenario of strong falling is improbable.

On Tuesday, we pay attention to the eurozone PMI services for February; if adjusted downward, Draghi’s rhetoric will be more optimistic. It is also worth tracking the GDP of Italy, retail sales and GDP of Eurozone for the 4th quarter.

Before the ECB summit, the euro has no serious reasons for growth, the market is focused on European statistics and the beginning of US-EU trade negotiations. Consultations will resume on March 6, but progress is unlikely. Trump's direct threats to increase import duties for cars from the EU or a negative insider on this subject guarantees to euro steep falling.

Speculators last week actively worked, but now positive for the pound is much more modest. Parliament supported the postponement of the voting date to March 12, but adopted Cooper's amendment. If by this moment though any version of the agreement is not ratified, then on March 14 it is necessary to vote concerning correction of the general date of an exit from the EU.

EU is ready for insignificant concessions, but does not allow a unilateral rupture of the agreement from Britain. Also the possibility of entering of critical changes into the agreement, recognition of accurate time frames of stay in the Customs union about the EU and other «loyal» formulations which were demanded by groups of eurosceptics Tories and DUP party is not discussed.

Analysts consider the strongest negative Mai's idea to prolong consultations on the Brexit for only 2 months that deputies of Britain could not take part in elections to European Parliament. It is excluded by any option of a repeated referendum and fight with Corbyn on this matter is not finished yet.

If the EU and Britain agree to adjust the guarantees on the Irish border, the pound will receive an incentive to continue to grow, but for a strong GBP/USD reversal, May needs a clear majority in parliament. At any time, a negative on this issue can lead to panic and a fall of 2-2.5 from current levels. Tomorrow you should pay attention to the publication of these PMI services, as well as the performance of Cunliff on Wednesday.

Current week «figures» of FRS have the last opportunity to influence expectations of the market before a meeting on March 20. Powell will participate on March 6 in a meeting of Financial Stability Board, the performance on prospects of monetary policy is announced on March 8, on Friday comments on labor market after the publication NFP are not excluded.

NFP for February will become one of key releases for understanding of rhetoric of FRS especially as the current statistics of the USA is rather unstable. Once strong reaction waits not only on growth of salaries and unemployment rates, but also on total number of new jobs. Growth higher than 200K in the absence of considerable audit on decrease in the last months will be a positive for dollar. Data with quantity of jobs lower than 100K against the background of fall of salaries will support the idea of preservation of rates of FRS this year and will sell dollar on any growth.

Twitter-Trump criticized Powell again and called dollar too expensive, rates unfairly high, and actions of FRS for control of liquidity «inadequate to a situation». Nervousness of the president is understandable.

The failure of negotiations with the DPRK showed need of serious correction of strategy of Trump by preparation for a presidential campaign of 2020.

At a meeting in Hanoi Donald staked on the talent of the negotiator and hoped to receive a diplomatic victory of historical scale easily. At the same time Kim Jong-un was sure that for the sake of self-advertisement and in a passion rush Trump will agree to global cancellation of sanctions. However Pompeo and Bolton controlled a situation and managed to save reputation of the president, having convinced him that the similar transaction represents much bigger damage, than demonstrative failure of negotiations.

On this background Trump will become more aggressive in trade negotiations with the EU and Japan. Tokyo is necessary a discussion with the USA concerning a «fair» rate of yen and the policy of BOJ what can cause short-term decline of USD/JPY in zone 109-105, but only consultations began so far, and the official beginning of negotiations is planned for May.

Apparently, with a failure in Hanoi China is most happy. According to unofficial data, the USA and China passed to a final stage of consultations on trade. Donnie will not be able «to press» to China and the DPRK at the same time, support of Beijing is necessary for it for the conclusion of any agreement with Kim Jong-un, so concessions under the mutual trade agreement are inevitable. China will please with PMI remains in the morning of Tuesday and trade balance on Friday. 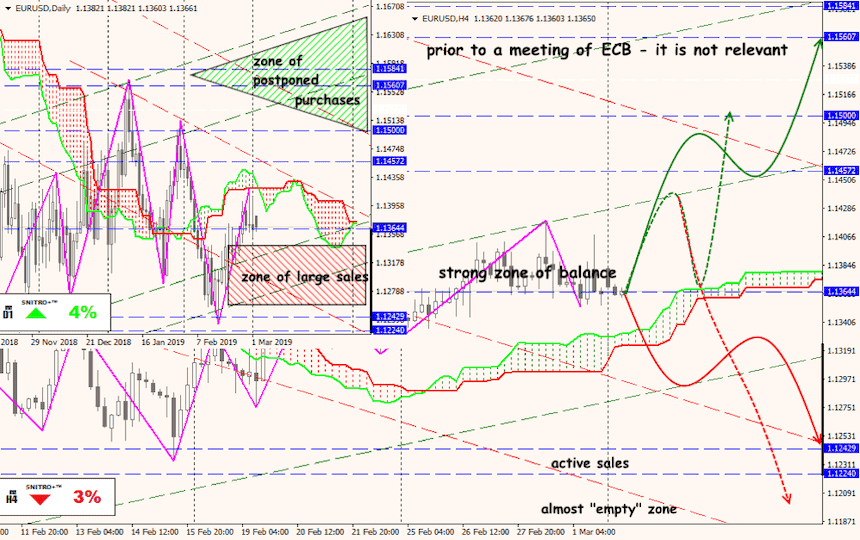 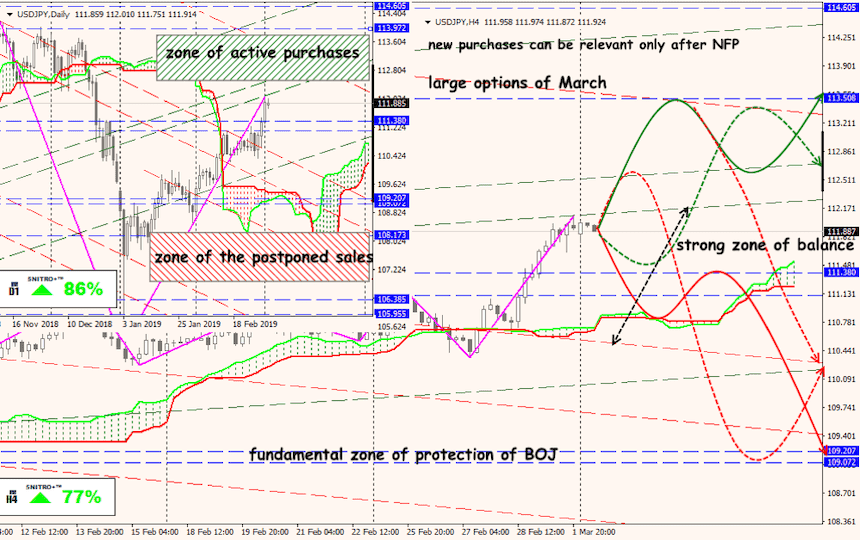