COVID the dollar is not a brother, but a great companion

FED is too loyal to the crisis; Brexit is back in the era of Theresa May; EU is not ready for financial decisions; oil does not share OPEC optimism. We are waiting for the second wave.

Investors are nervous about the fact that infected people are growing in the USA; Powell said this could damage the current precarious balance in the US economy. The deterioration of US-China relations and riots further overshadow forecasts, however, the more intense the rampant infection, the more investors flee into the dollar. Apparently, markets do not need victory over the virus.

Statements by the Federal Reserve turned out to be softer, which caused an escape from risk amid rising dollar. No guarantees are provided for current rates. The pace and volume of purchases of US T-bills and mortgage bonds will continue, at least until the end of 2020. It is obvious that Fed forecasts on rates are associated with the expectation of a long period of low inflation.

FED fears that its initial conclusions on the strength and duration of the slowdown in the US economy may be erroneous, the May NFP surprised the Fed members with the pace of job recovery (Powell called the situation a «positive surprise»). FED does not have confidence in the need for a long, super-soft policy, but the continued fall of the stock market amid a rising dollar will make it more specific.

The meeting of the Eurozone finance ministers did not lead to progress in negotiations on the EU Recovery Fund. Although the «four money grubber» − Austria, Denmark, the Netherlands and Sweden − have somewhat softened over the EU’s ambitious stimulus program, which slightly supports the euro. Nevertheless, the Dutch Minister of Finance believes that the decision on the budget and the recovery fund will be postponed until the fall, as «quality is more important than speed».

The discussion on the restoration fund will be the main topic of the meeting on July 9-10, and the main issue for the EU leaders summit on June 19 will again be Brexit.

After the June decision to increase the volume of the euroQE program, no new surprises are expected from the ECB. The LTRO auction will take place on Thursday, during which it is expected that banks will take advantage of the ECB's proposal and the size of loans issued will be impressive.

In any case, we are waiting for the opening of the week from June 22 with a strong gap in the euro.

Despite the extremely pessimistic forecast, real data on the growth of the British economy were much worse than the 2008 recession. In April, GDP lost 20.1%, industrial production − 20.3%, services − 19%. Bailey did not manage to calm the markets and speculators are also afraid of lowering the BOE rate to negative values at the June 18 meeting.

The concessions of the Johnson government were simply inevitable: Britain and the EU agreed to intensify Brexit negotiations from June 29 to August 21. Britain also agrees to postpone the introduction of tight border controls on the EU border for 6 months − this is the first step towards a softer Brexit option under the Teresa May scheme. EU political pressure is increasing: Johnson will hold an informal business meeting today with EU President Charles Michel and European Commission President Ursula von der Leyen, although it is unlikely that new ideas will come up after this meeting. Macron also plans to visit London for a confidential «conversation» with the British Prime Minister.

The pound has so far lost about three figures and is trying to adequately hold the blow, but comments after the meetings can radically change the fundamental and technical picture of all British assets.

Stock reports no longer delight buyers, and OPEC's press conference was a big disappointment. Saudi Arabia and Qatar refuse the initiative of «voluntary» reductions and intend to act strictly within the framework of the quota; Mexico refuses even minimal obligations. Fresh insiders indicate the absence of plans to extend the deal in the amount of 9.5-9.7 million barrels. after July 1st. The risks of the second wave of coronavirus put pressure on prices, demand is not recovering, consumption is at a minimum, so Trump’s actively advertised positive assessment of the situation is exaggerated.

The Chinese statistics published this morning, Asian markets have already regarded as negative, the impact of these data on the other assets is minimal. We draw attention to the German ZEW index and consumer price inflation in the Eurozone, as well as data on retail sales and US unemployment applications. We are waiting for statistics on the British labor market, a report on inflation and retail sales.

This week, Powell will speak three times, on Tuesday and Wednesday − before Congressional committees, on Friday − will take part in a discussion on the labor market during the coronavirus pandemic. New signals in the topic of monetary incentives are not ruled out, although this requires a strong fall in the stock market and a sharply negative retail sales report for May. 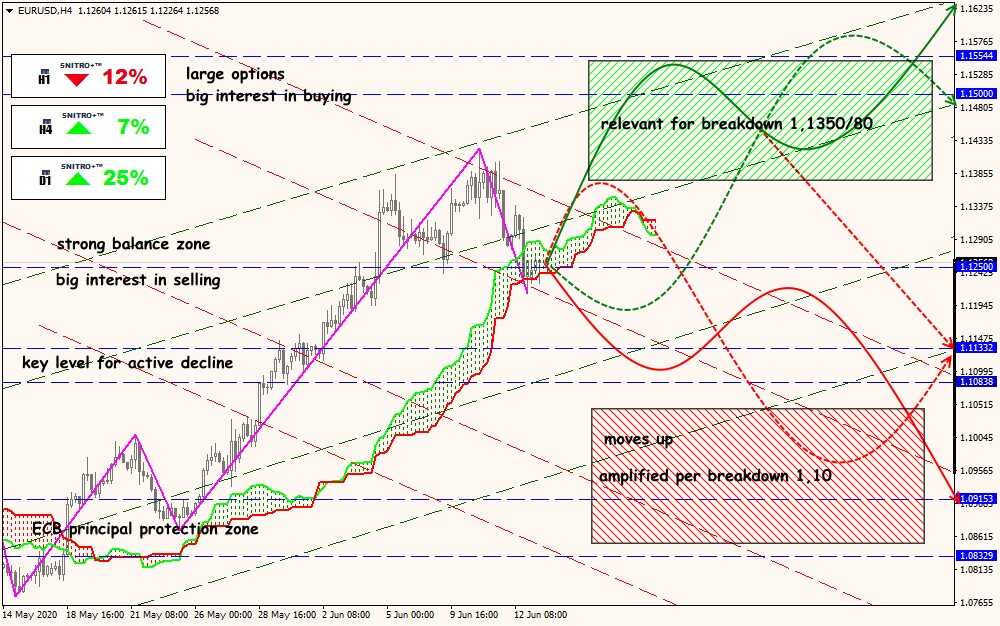 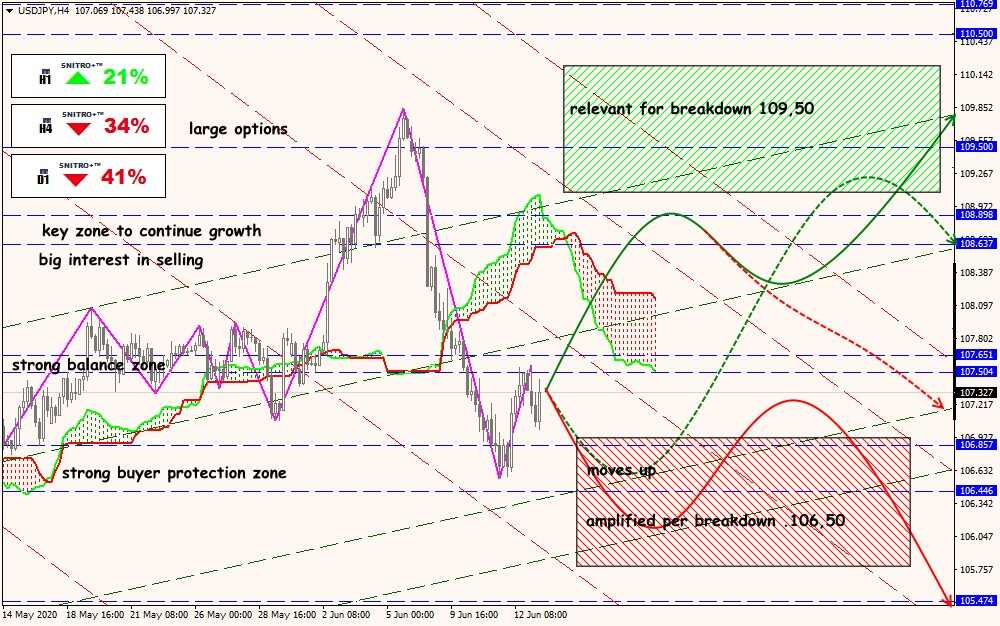 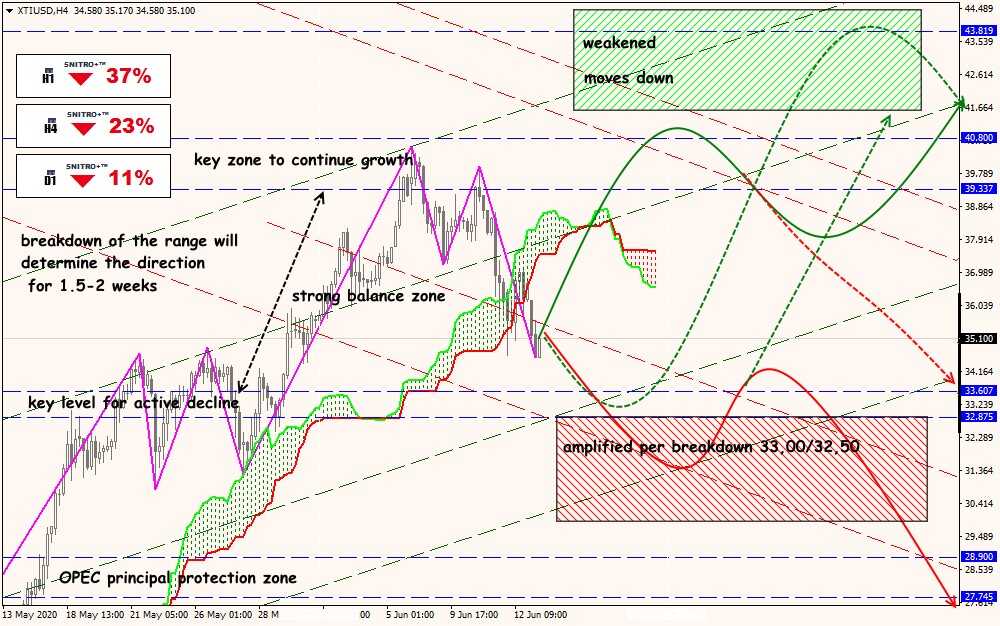