An uppercut for the president or not to give money to Trump!

The White House doesn't answer calls, the Statue of Liberty under the lock, Trump's trip to Davos questionable.

The pound has reached historical level before a vote of the 2016th and is almost ready to new fight for Brexit. The shut down of the USA will be the main driver of the market current week.

This the first in the history of America «closing of the government» in a situation when one party controls both the White House and both chambers of the Congress. In this occasion Trump even (!) had to cancel a visit to the Mar a Lago private residence.

Democrats in the Senate of the USA demanded to finance by the government of obligations for DACA immigration, and Trump − constructions of a wall on the border with Mexico. As a result of the active auction, the political transaction hasn't taken place and the country has gone on vacation.

The greatest risks of the shut down is a possible deprivation of the USA of AAA rating that will cause a mass output of investors from state treasury bills of the USA as the leading funds are obliged to hold assets only with the higher investment rating. Continuation of a financial collapse can lead to an official failure of China to buy the American papers that against the background of the developing trade war will add the especially negative drive for a dollar. In case of a rating downgrade of the USA, the dollar will fall strongly, long and painfully.

Trump's press service announced telephone consultations of the president with congressmen, there is no other official information. Work over the temporal decision (extension till February 8) is continuing, but only the long-term agreement on an increase in a ceiling of a national debt can lead to a sure turn of the dollar in growth. According to a news feed of Bloomberg, at the moment the agreement on DACA is not reached, and without this decision, other issues were not even discussed. The break is declared, a new attempt of the vote will be made after 8:00 CET.

Last week members of the ECB pleased with two leakages of contradictory «insider», but it was not succeeded to push out euro from the ascending trend yet. Banking analysts declare revising of «pain threshold» for the ECB for EUR/USD from 1:21 till 1:25. In FRS and the ECB there came the silence periods before meetings; Draghi and Konstancio will participate in a meeting of the Eurogroup on Monday and the Ministries of Finance of the Eurozone on Tuesday, but public statements are not expected.

The meeting of the ECB on January 25 is planned as working, without change of basic formulations, special attention to Draghi`s verbal interventions, the main objective of which is to turn a course down by an exception of any hints which can support large purchases.

The main problem not in the power of euro, and in the weakness of the dollar and if the USA don't break a political impasse by the time of the press conference of the ECB, then any decline of euro will be short-term.

Attempts to prevent the political union of Merkel-Schultz which the German media called «a revolt of gnomes» have failed: SDP party has passed the decision on the beginning of coalition negotiations with the block of CDU/CSU. It will provide a strong counteraction to local eurosceptics and will allow creating the government having a parliamentary majority until the end of February. Now the relation of the markets towards the German coalition depends on the agreement on reforms of the Eurozone which is planned to be submitted at the summit of leaders of the EU in March.

IEA has published the forecast on Friday according to which this year America will outstrip Russia and Saudi Arabia on the production of oil thanks to last and current investments though the slate companies have reduced the rate of future expenses. For the first time since the beginning of a shale gas revolution, they can earn more than spending. It is promoted by an increase in prices for oil and Trump's permissions to drilling across all territory of the USA.

Implementation of the agreement of OPEC last week has reached 129%. Raw analysts consider that the cartel has achieved what it wanted, but it for some reason doesn't please it. That it is harder and harder for oil to hold the current positions and also because Saudi Arabia will lose interest in cooperation after the IPO of Saudi Aramco, the countries of OPEC and out of OPEC prepare for gradual cancellation of the agreement on oil production reduction.

Macron and Merkel have said that Germany and France are ready to update the Elysian contract (of 22 January 1963). The countries intend to intensify cooperation in economic, public, political and technological spheres, plan to deepen cooperation of law enforcement agencies and intelligence agencies. Also work concerning uniform standards of the taxation and discussion of a possibility of uniform insurance of deposits in banks of the Eurozone is conducted.

The pound grows on rumors about the readiness of leaders of the EU for a softer Brexit option with preservation of euro clearing in London. Members of parliament have supported the law on an exit from the EU that is an important victory for May. Nevertheless, the heat of claims from the EU doesn't decrease. Macron has again said that Great Britain is obliged to pay contributions to the budget of the EU and to make decisions of the courts of the EU if it wants to keep access to the uniform market; he also denies creation of special conditions for the city of London. The beginning of the discussion of a transition period is appointed to the end of the week.

The project on investments into infrastructure is announced by Trump on January 30, but can quite take place this week. On Asian assets speculation in connection with a meeting of the Bank of Japan on Tuesday is possible: special changes aren't planned, but yen investors wait for changes. Considering lack of connection between profitability in the USA and dollar, a USD/JPY pair can show negative dynamics in the next 2-3 weeks.

On Wednesday we pay attention to the British statistics on salary (and GDP of Britain – on Friday) and also indexes of Markit in a services sector and productions in the eurozone, indexes of Germany of ZEW and IFO. GDP of the USA for the 4th quarter will finish the week.

The economic forum will take place in Davos from 23 January to 26 January, it is expected that leaders of Europe will perform on January 24 with the rhetoric condemning Trump's protectionism. A visit of the American president on a forum so far questionable. The market will react to any statistics of the USA only after a solution of the problem of the shutdown. 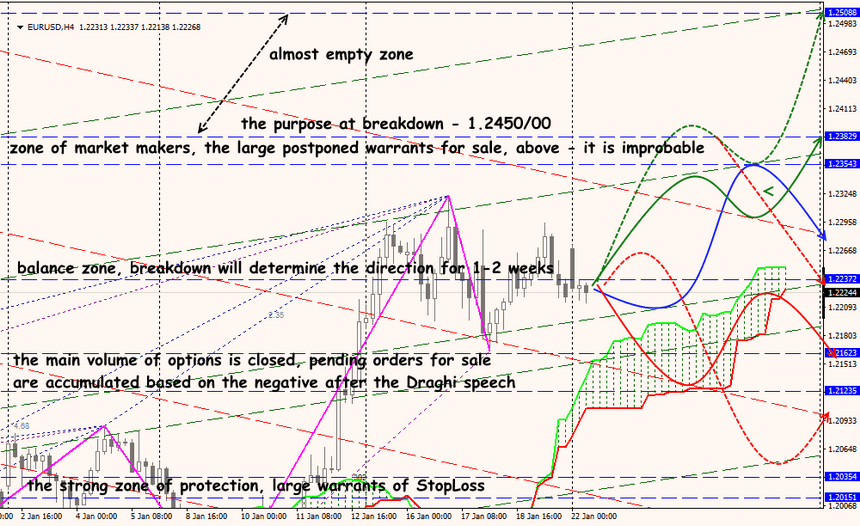 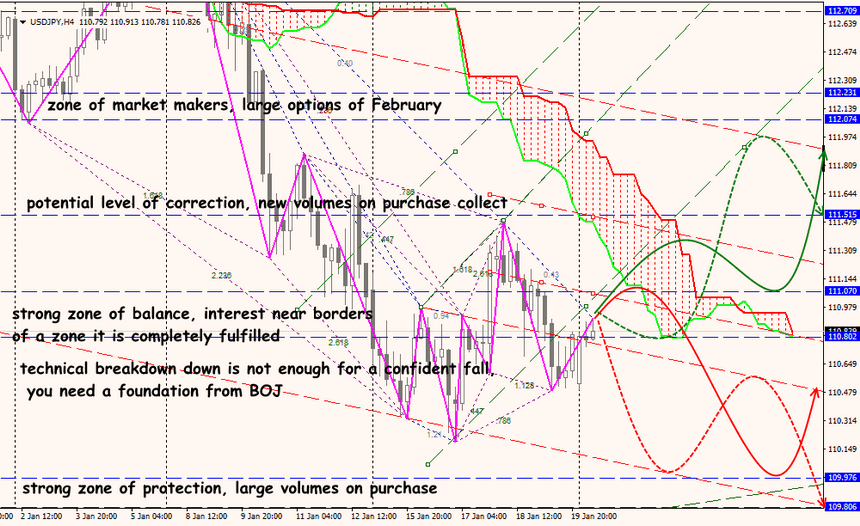