America in focus: a time to gather stones together

The ECB has made everything that was planned, the Bank of England has raised rates and has dropped pound.

Germany has created the government; Catalonia has suspended games for democracy. The European factors fade into the background, the market chooses the American scenery.

The wizard Trump, after all, has turned «the grandmother in the grandfather» − for the first time powers of the current head of the Federal Reserve haven't been prolonged for the second term. The lawyer without academic degree Jerome Powell whose comments in five years of stay in the administrative board are limited to several phrases is appointed the head of the Federal Reserve.

Investors perceive him as the successor of Yellen so far, but these figures have different reference points in monetary policy. The labor market was the main thing for Yellen and she didn't pay attention to weak inflation at high employment, and Powell (the investment banker and the former Deputy Minister of Finance) − the active supporter of the decrease in regulation of the banking sector and most of all he is afraid of negative reaction of the financial markets.

Time of normalization of rates at the new management of FRS will be slower, but in the long term, Powell is a positive factor for dollar, oil and risk assets. The option of appointment of Taylor to a vice-president of FRS remains a joker in a sleeve that can provide to a dollar a new impulse to growth, but not earlier than Trump's return from Asia tour (on 14 November). The Yellen`s performance on November 7 on an award of Paul Douglas «For ethics in the government» is interesting unless to history, influence on the market now is minimum.

The statement of FRS for 90% copies the September text, nobody wanted to concern in addition the markets before the presentation of the new head of the Federal Reserve. The growth of the general inflation in September has been referred to the influence of hurricanes, and in the rest, the Federal Reserve System is happy with the growth of economy and labor market. The lack of growth of basic inflation is noted, return to a target level (2%) in the medium term is planned. That is in principle everything is good, but for dollar - it is still bad.

NFP left worse than expectations almost in all respects − and the first reaction to it was correct. But also such statistics don't cancel the increase in rates − the probability of the solution of a question in December approaches 100%. The growth of dollar in the second reaction wasn't confirmed by growth of the profitability of state treasury bills of the USA, and, most likely, has been caused by the large fixing of profit on the closing of the week. Correction – is obligatory.

Despite officially submitted project, this version isn't final, changes can be made until tomorrow. Some basic parameters of tax paradise from Trump are still discussed. The markets have reacted so far neutrally as very few people expect the passing of the bill in the current form. Assessment of the budgetary committee of the Congress is expected today. Vote in the lower house is expected next week, Trump wants to receive ratification by the lower house until 23 November and to sign the law till Christmas, but there can be problems with the quantity of necessary voices in the Senate. If the project (at least in the first reading!) will pass the Congress until the end of the year – the strong positive to the dollar is guaranteed.

A current week there are no important events and statistics planned, from economic data it is worth tracing across the USA the report on the mood of consumers, and on the Eurozone − PMI services, the trade balance of Germany and the block of data of Britain on Friday. Fans of Asian assets, in addition to, certainly, visit of Trump, should pay attention to decisions on monetary policy of the Central Banks of Australia and New Zealand. We listen carefully to all politicians. 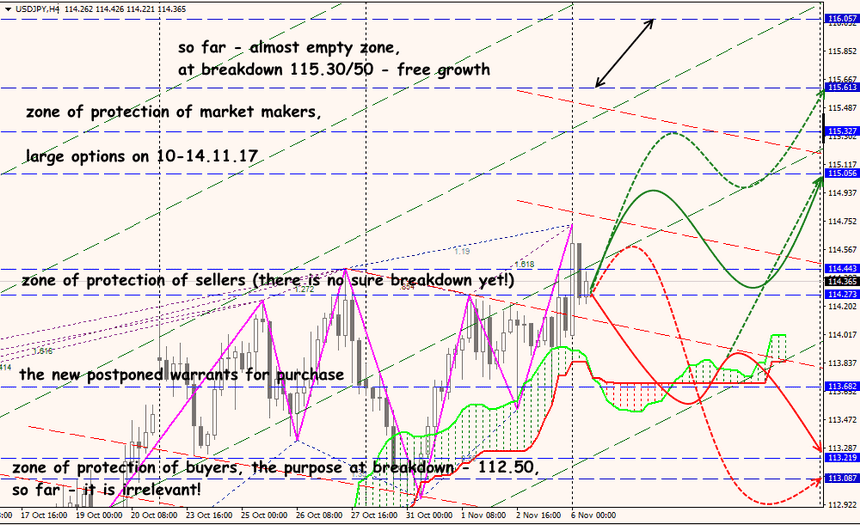