Markets are waiting for a vaccine for problems

Trump continues to fight; another crisis in the Eurozone; COVID-19 is collecting new victims; China is returning to the problem of domestic debt. Interest in the dollar continues unabated.

Time for Trump's psychosis and cheating to refute the election results is coming to an end we are waiting for Joe Biden's formal statement about moving to White House. Donnie disagrees with the failure of the election, but his ambitions are grandiose. Trump intends to fight for a Republican victory in the second round of Senate elections on January 5, like this (potentially!) will increase his chances of winning when running for president in 2024.

The political stalemate is likely to be offset by the Fed's ultra-soft policy providing sufficient liquidity to keep the dollar under pressure.

Mnuchin entered into a confrontation with Fed: he demanded that the regulator urgently returns to the Treasury unused funds from the emergency fund to combat COVID in the amount of $ 455 billion and send this amount for other purposes. Some analysts believe that the money could be spent on a package of new fiscal stimulus, allowing Senate fiscal activists to increase the compromise offer for Democratic opponents to $ 1 trillion.

Fed reacted almost immediately with a short statement: «It is imperative that the full range of emergency supplies offered during the pandemic continue to fulfil its important role». Investor panic was immediate due to fears that this decision would unsettle the markets and prevent the US from recovering economically. A more active reaction should be expected after the return of the Senate from vacation in the week of November 30.

British asset purchases have been stimulated by insights that Barnier would announce the highly anticipated London deal. Alas, the miracle did not happen. A member of the EU team who fell ill with Covid-19 became the reason for the quarantine of both negotiation groups and the transition to a virtual communication mode. European Commission Secretary Ilze Johansson told the EU ambassadors that the Brexit deal is 95% ready, but the remaining 5% includes unresolved key issues. Bilateral meetings in private may be extended until December.

Both sides are preparing for a breakthrough in the negotiations, but the EU expects significant concessions from Johnson. British government is preparing a plan for urgent ratification of the agreement in parliament, the EU is ready to accept the agreement on a temporary basis, which will postpone ratification until next year. Another deadline is the EU leaders' summit on December 10, but the main documents may be agreed upon by November 30.

The aggressiveness of the US-China relationship could lead the world to a catastrophe comparable to the First World War − this opinion of the mastodon of American diplomacy Henry Kissinger cannot be ignored. Trump has one last argument in the conflict with the eastern monster: limiting dollar funding for Chinese businesses. White House has already banned Americans from investing in Chinese defence-related stocks, and the US Securities and Exchange Commission is considering obliging Chinese members to use American auditors. This could lead to the delisting of most Chinese companies from US exchanges. Beijing fears that the US could cut off Chinese banks from dollar funding, and while China can always sell some of its foreign currency assets to stabilize the situation, the dollar itself is unlikely to like it.

The current trading week is short: major US markets will be closed on Thursday due to Thanksgiving, and there will be a shortened trading session on Friday. Pay attention to the statistics:

Important economic reports from China are not expected, as well as statements from officials from the Fed. Lagarde will appear in front of the press tomorrow, but the likelihood of hearing something new is minimal.

We will see the ECB minutes on Thursday, investors will look in the text for hints of the ECB's actions at a future meeting, the reaction on the euro depends on ideas for adjusting the rate.

OPEC members continue to convince the markets of the need to extend the current oil quotas by 3-6 months, but insiders − disagreements within the Cartel dull buyers' optimism. There are no official statements before the OPEC + summit outside OPEC on November 30, all comments are private opinions.

The pound remains in the trend of the Brexit negotiations, although the PMI data may change the opinion about the outlook for the BOE policy and cause a downward correction.

FRS minutes will be published on November 25, but there is no need to wait for new information for forecasts regarding the December 16 meeting. We draw attention only to the opinion of FRS members on the future of the QE program, as the markets expect an increase in the monthly volume of purchases of US T-bonds.

US statistics will not cause a strong market reaction. Proceeding from the strict quarantine measures in the Eurozone, we do not expect positive PMI, and negative data may shift the balance of volumes towards sales. 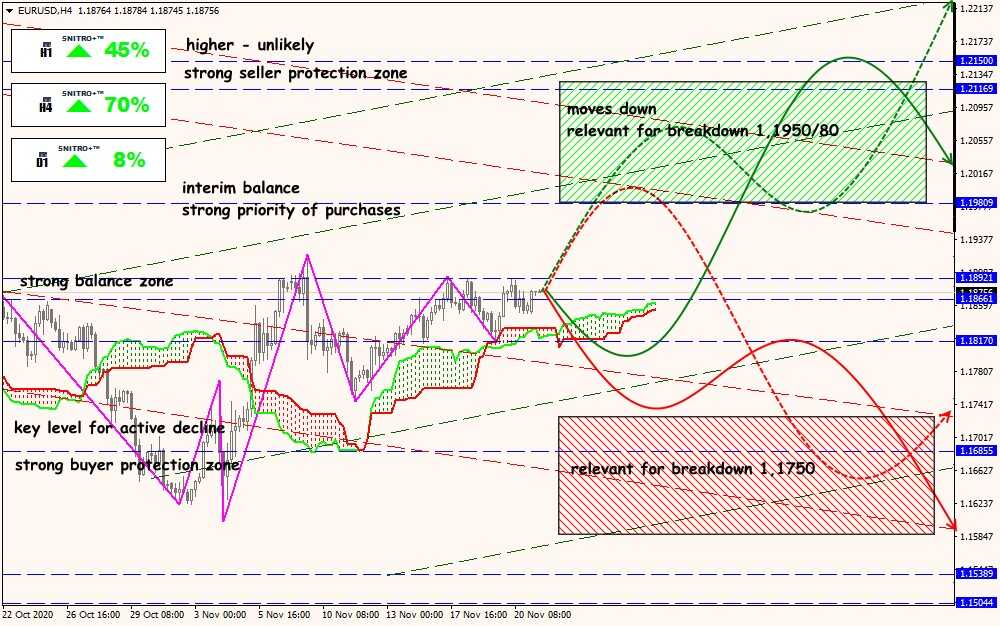 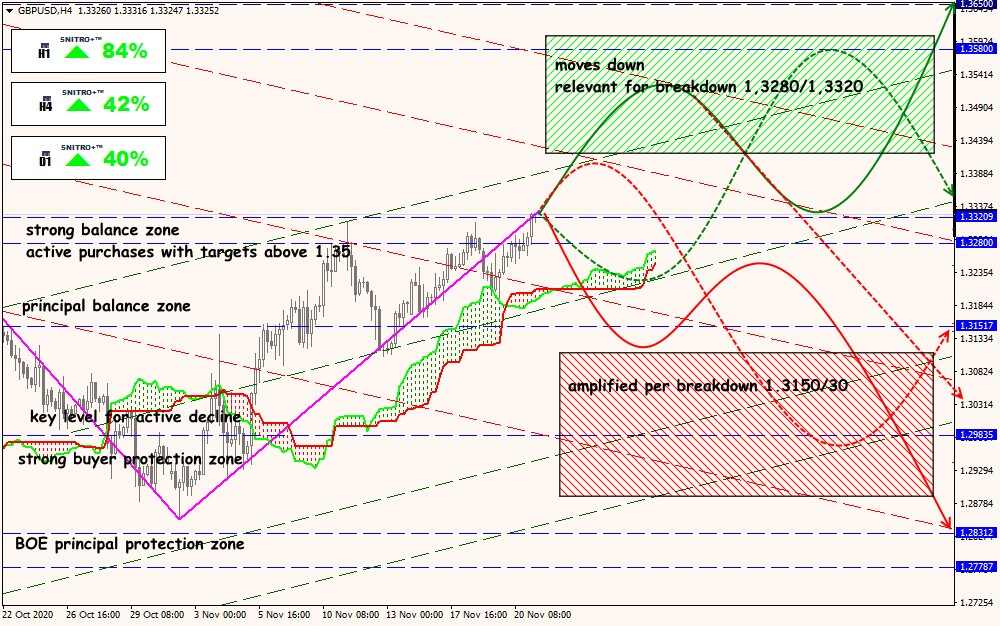 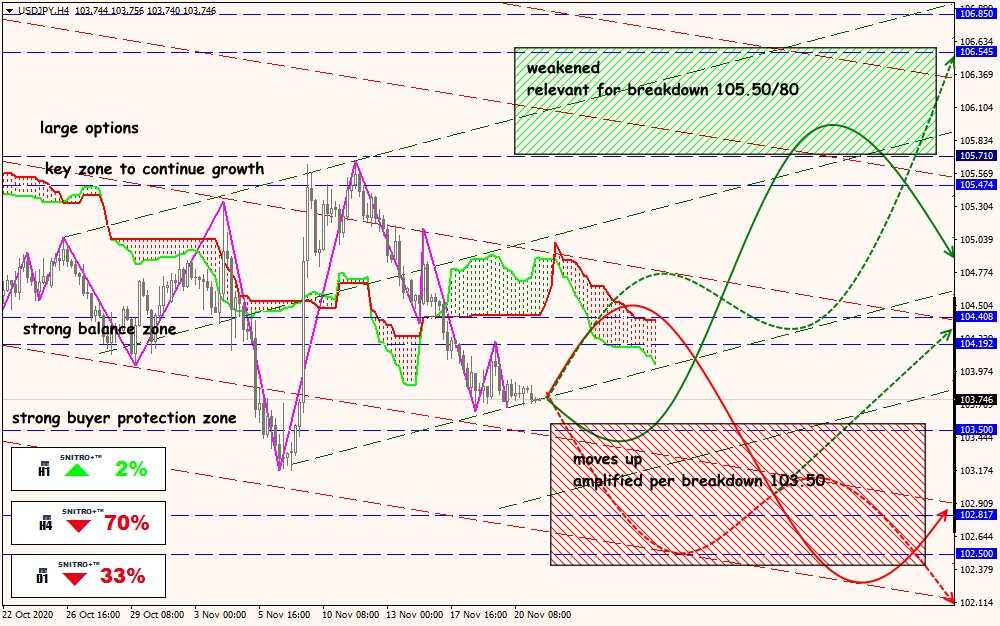 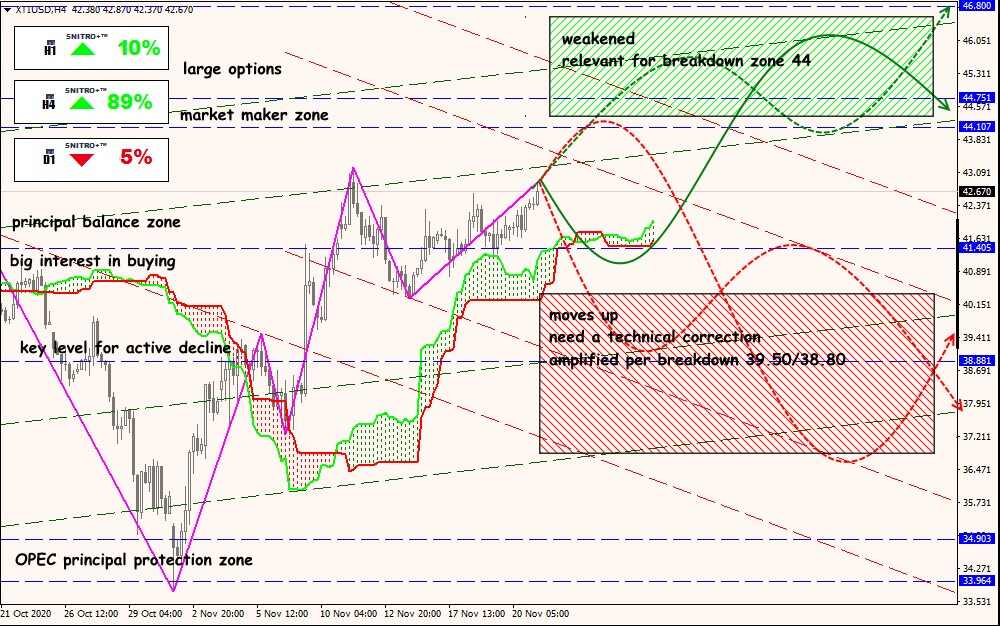