Market is at a fresh start: it's time to synchronize watches

World problems are not cancelled, but new solutions are needed. Until major investors return to action, we have time to aim correctly.

We believe that the main market drivers this year will be:

Changing Trump's adventurism to Biden's traditional policies should make the life of currency speculators easier, but add problems to those who like stock assets. Donnie assessed his rating only by the levels of the stock market, and the new administration of the White House will return the dependence of the main trends in the foreign exchange market on the policy of Fed.

Republicans in the US Senate on Friday overturned Trump's veto (for the first time in four years) and, following the House of Representatives, approved a $740 billion defence budget bill.

Trump's trade wars are a thing of the past. Biden, when resolving trade disputes, will adhere to international law, that is, solve problems through the WTO and negotiations with compliance with deadlines. This will lead to the satisfaction of claims against the increase in trade duties − as a result, most of the duties will be cancelled. This factor has been worked out by the active devaluation of the dollar after the presidential elections.

A change in tax policy, the conclusion of international agreements on taxation of digital companies and the climate will provoke a correction in the stock market.

The «fresh» form of trade wars will be the fight against climate change. Recall: Trump withdrew from the Paris Climate Agreement and as a result, the most ambitious EU project was practically frozen for 4 years. Biden intends to return the United States to the process, while at the same time undertaking obligations to phase out the use of coal, oil and gas. The US-EU coalition will lead to the emergence of climate duties that will become analogous to trade duties and a new form of protectionism under the slogan of fighting for the environment. This means new taxes for citizens (on diesel and petrol cars, on houses without energy-saving technologies, etc.)

The ECB is already actively discussing the opportunity of buying bonds of «green» companies with a possible refusal to buy shares of those companies whose activities are harmful to the environment.

Trump refused to discuss this issue with the EU, traditionally threatening to introduce trade duties for an attempt to increase GDP growth in the Eurozone at the expense of US companies. The new administration is ready to introduce a global digital tax − consultations with EU representatives on digital markets and digital services are already underway. New laws could significantly limit the power of BigTech companies. Analysts set aside several years for the adoption of the DMA and DSA bills, although if the Democrats win in the second round in Georgia on January 5, the process will accelerate significantly.

The planned correction of the tax system by the Biden administration will be a strong negative for the stock market: taxes will be raised in any case, the whole question is in the amount of the increase and in time. The outcome of the Georgia election will have a significant impact: if the Democrats win, tax reform will move faster through Congress, and tax hike levels will be closer to Biden's campaign agenda. If the Republicans win, the bidding process will drag on until the end of the year.

Do not forget about Yellen: the former «lady of the Fed» understands that raising taxes during the recovery of the US economy after the coronavirus pandemic is not a good idea, it would be more logical to postpone the tax increase for a year.

Trump succeeded in the impossible: the Fed, led by Powell, in the fall of 2019 began buying US GKOs without the threat of a recession, ostensibly to stabilize markets. During Biden's rule, the pressure will decrease − Yellen has always advocated the independence of the Fed's policy. Powell will find it difficult to resist the new Treasury due to his weak personal skill level. The size of the Fed's QE program will be reduced at the time of the emergence of massive immunity in the United States and, more likely, that the decision will be made at the June meeting. The Fed may stop buying assets from January 1, 2022.

Correction of market participants' expectations regarding the duration of the Fed's ultra-soft policy will lead to a rise in the dollar and a fall in the US stock market.

The process will proceed at different rates depending on the rate of vaccination, the amount of herd immunity acquired, and the size of the fiscal incentives.

The US economy will recover at a faster pace: Trump actually did not allow the introduction of tough quarantine measures, so the fall in the US economy was less than in the Eurozone countries.

EU Recovery Fund does not compensate for all the costs of troubled countries. The euro's strong reaction was related to the precedent for the distribution of money from rich countries to poor. Let's remind: elections in Germany start in mid-January, and much in European politics will depend on Merkel's successor.

In the next couple of weeks, the result of the effectiveness of vaccines for new strains of coronavirus will be known. If it turns out that modernization of vaccines is necessary, then the fall in the stock market will be steep, and the rise of the dollar will be vertical.

ECB has fallen into the trap of yields in troubled southern countries rated one notch above junk, a clear sign of a bubble never seen before in size. The reduction of the QE PEPP program will open the way to a new debt crisis in the Eurozone, and there are two ways out in this situation: either the perpetual QE or the launch of Eurobonds. The eternal QE will not be tolerated by the Bundesbank. Eurobonds may materialize in some form after Merkel's departure, but that requires Macron to win the next election. In any case, the euro has a very difficult year to go through.

The resumption of growth in the euro after a downward correction will be associated with expectations for the outcome of elections in the key countries of the Eurozone.

The UK and EU have approved a trade agreement − and this is not the end, but only the beginning. At a special session of Parliament, Johnson said that taking advantage of Britain's new-found sovereignty, he hopes to work in tandem with the EU to change the British economy. By the way, the father of the British Prime Minister received French citizenship on January 1. Previously Stanley Johnson represented the Conservative Party in parliament and was a member of the European Parliament.

From January 1, the new partnership agreement will regulate all kinds of trade relations. After signing by both parties, the agreement will enter into force and will last until the end of February, until the European Parliament finally approves it and makes it permanent.

It is not yet clear what energy policy the Biden / Harris administration will support. If the ban on new leases for oil and gas production is implemented, then the US oil market could lose up to 25%.

The UAE and Russia have teamed up against Saudi Arabia to increase production. The fight ended in a compromise in favour of Russia and the UAE, according to which OPEC+ will consider a gradual increase in production monthly. Today a meeting of the OPEC ministerial committee will take place, where decisions will be made on the further implementation of the reduction program. An official announcement is not planned, so we look for the inside and listen to private comments.

The market expects pent-up transport demand to be realized after the quarantine is lifted, but demand for jet fuel will be weak for much of 2021, even if vaccination is widespread. Major Chinese oil companies may be next in line to be delisted in the US after the New York Stock Exchange said last week that it would remove three of China's largest telecoms from the list. The threat concerns CNOOC, PetroChina and China Petroleum and Chemical Corp.

Even taking vaccinations into account, it is impossible to fully predict all the economic damage in 2021.

Refusal from geological exploration should cause a shortage of new proven oil reserves, but this factor is not yet felt in the short-term dynamics.

This week we are waiting for the indices of business activity in the spheres of production for all the leading countries − we pay maximum attention to the statistics of the USA and the European Union. A stronger impact on the euro may have data on industrial production and the publication of the minutes of the last meeting of the ECB. In addition to the next NFPs, the US and Canada will announce changes in the foreign trade balance for November, but a strong reaction from major assets is unlikely. 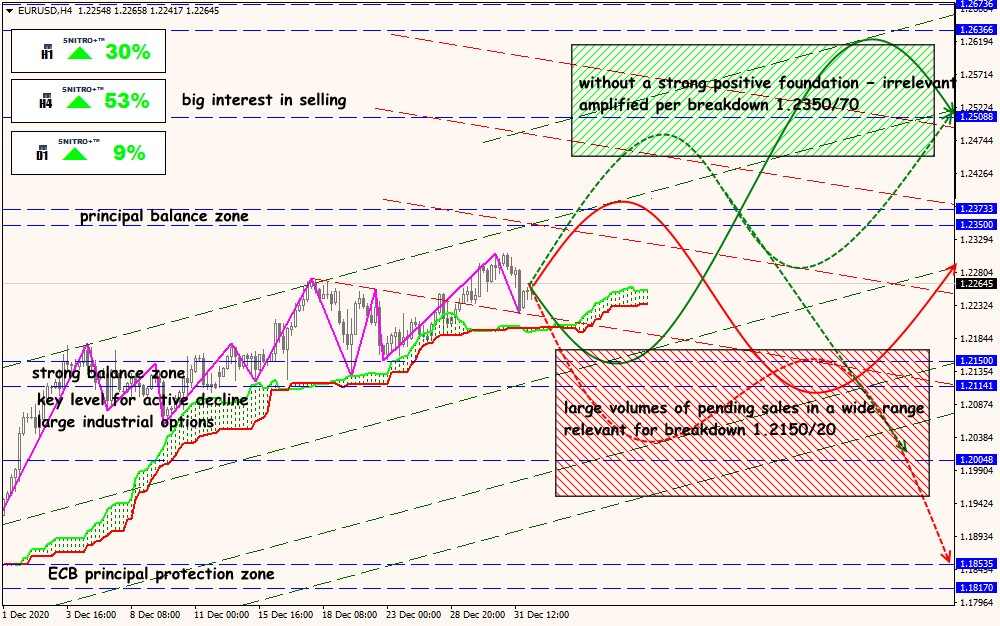 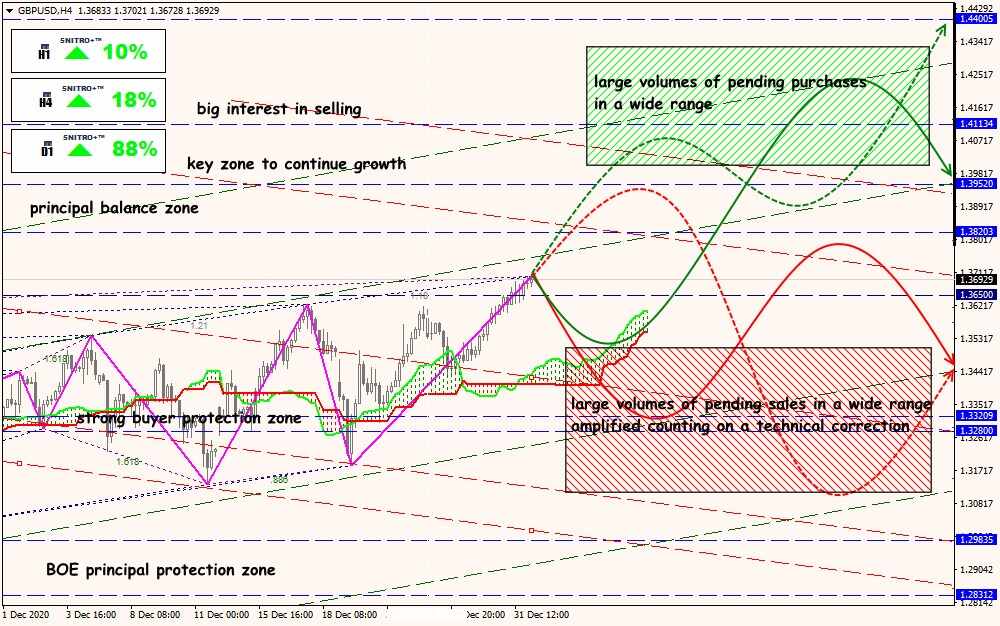 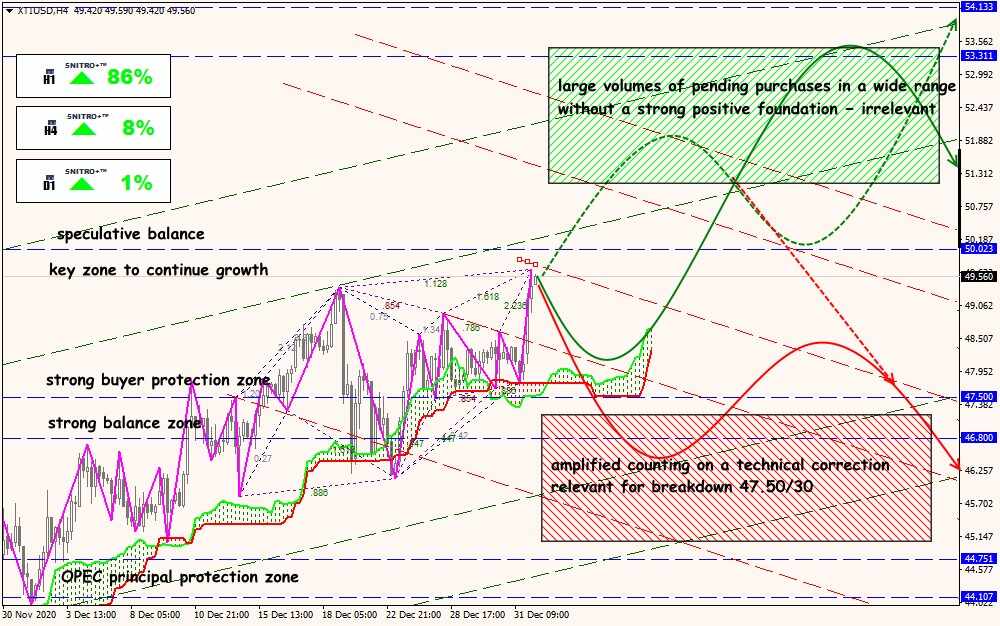