Going back to old goals

Weak NFP, hopeless Brexit, scandals in the EU and raging COVID: the market began to react to economic factors.

The November report on the US labour market came out worse than forecast (confirmed the baseline scenario), although the drop in unemployment levels partially offset the negative. In terms of the upcoming Fed decision, this report is not bad enough to increase and not good enough to reduce the size of the QE program.

OPEC + outside OPEC has decided to gradually increase oil production from January by 500K barrels, but they promise to revise this volume every month, depending on the market situation. Correction is possible in both directions.

Iran begins preparations to increase exports. The Islamic Republic is counting on the administration of the new US president to return to the nuclear deal that Trump cancelled and ease the sanctions restrictions on oil and gas exports. Iran's oil ministry has received an order to prepare production enterprises for reaching full capacity within three months. Iran is not shackled by restrictions under the OPEC + deal, which will allow it to increase production without hindrance if sanctions are lifted. We also expect comments on this topic this week.

The next round of negotiations did not produce any result; moreover, it added some negativity. France categorically disagreed with the concessions on fisheries and the «level playing field», as a result, both sides recognized insurmountable contradictions and suspended negotiations.

Johnson has already said that the British government does not intend to make concessions and there will be no agreement if the EU does not abandon its demands. Merkel habitually puts pressure on Macron and calls on both sides to abandon the «red lines» to reach an agreement.

Johnson and von der Leyen in a telephone conversation agreed to make another attempt and yesterday afternoon in Brussels, Barnier and Frost continued the discussion. At least an approximate version of the agreement should be ready for signing at the EU leaders' summit on December 10-11.

Today Barnier is informing the ambassadors of the 27 EU countries about the progress of the negotiations, we are waiting for active insiders. An emergency EU summit on Brexit is not yet planned. The dynamics of the pound will be completely dependent on the negotiations.

The EU leaders intend to devote the meeting to the problem of lifting the veto of Poland and Hungary from the budget and the EU recovery fund.

For the «rioters» a tough solution is proposed: the European Union is ready to exclude Poland and Hungary from the recovery fund. Thus, the rest of the countries will get more money, and the democratic values of the EU will not suffer. Politicians are confident that Poland and Hungary, fearing the anger of the electorate, will not risk being left without EU money.

Additionally, Merkel is ready to promise that the law on the rule of law will never be applied. But given the imminent departure of Angels from politics, these guarantees are dubious, although they can be officially recorded in the event of overcoming the resistance of the northern countries led by Holland. Poland is ready to surrender, but Hungary is still persisting.

If the crisis in negotiations with Britain continues, pressure on Macron will join the intimidation of Poland and Hungary to lift his veto from the Brexit agreement. If no agreement is reached with Poland and Hungary, the EU will have to renegotiate the agreement on the EU recovery fund, which will delay its launch by several months and become a strong negative factor for the euro.

Insiders and direct speeches by ECB members, including Lagarde and chief economist Lane, were too frank, so no surprises are expected.

The consensus is that in a pandemic situation, the QE PEPP program is the best response against the backdrop of better lending terms for TLTROs. Numerous insiders report that the ECB is ready to increase the QE PEPP program to €2.0 trillion and extend it for 12 months (until July 2022). An option with an extension of 6 months is possible to assess intermediate results.

European investors continue to be in a quiet panic, as the «trash» papers of Italy, Greece, Spain are at their maximum levels despite the fundamental indicators. The ECB's balance is actively growing and the end of the money «printing» press is not visible. The solution to the problem may be Eurobonds, but Germany is still against both the eternal QE and the sharing of the debt with its partners.

At the upcoming meeting, a rate cut is unlikely, but Lagarde will manipulate and intimidate a possible rate cut in the future.

For the first time in months, Senate Majority Leader McConnell held talks with Pelosi. Democratic leaders made significant concessions on the size and composition of the aid package and offered to seek a compromise through a $908 billion bipartisan bill.

Interesting fact: anti-Trump media increasingly began to call Trump's «associates» «accomplices». Still, the upcoming draw for two vacancies in the Senate on the January 5 vote makes politicians surprisingly accommodating. Trump has said he will sign any bill passed by Congress.

The next shutdown in the United States will come on December 12 in the absence of the adoption by Congress of the bill on government spending, but both parties are interested in not allowing a stop in work. It is possible that Congress will pass a temporary bill (1-2 weeks) to reach agreement on the stimulus package and pass the general bill by December 26.

The adoption of the stimulus package will be positive for the stock market. US consumer price inflation will influence the Fed's decision during the December 16 meeting.

We also pay attention to the following data:

Trump plans to host a U.S. COVID-19 vaccine summit tomorrow (scandalous statements are possible). On Wednesday, the US Food and Drug Administration will discuss Pfizer Inc.'s bid. and BioNTech SE for approval for mass use of the vaccine.

The OECD will host an annual productivity conference, and its report may be of interest to commodity fans.

A «period of silence» has begun at the Fed. Fed officials practically did not comment on the weak report of the NFP, which speaks, at least, of internal disagreements. Everyone is preparing to «shoot» on December 16.

Lagarde's briefing is scheduled for Thursday: most likely, everything will be boring and will not affect the dynamics of the euro. In the absence of a fall in the euro following the meeting, one can expect insider information on Thursday evening and active statements by the ECB officials on Friday morning, but, perhaps, the main figures will prefer to wait for the outcome of the EU leaders' summit. In the absence of progress on the issue of lifting the veto of Poland and Hungary on the recovery fund, the euro will fall without further comment. 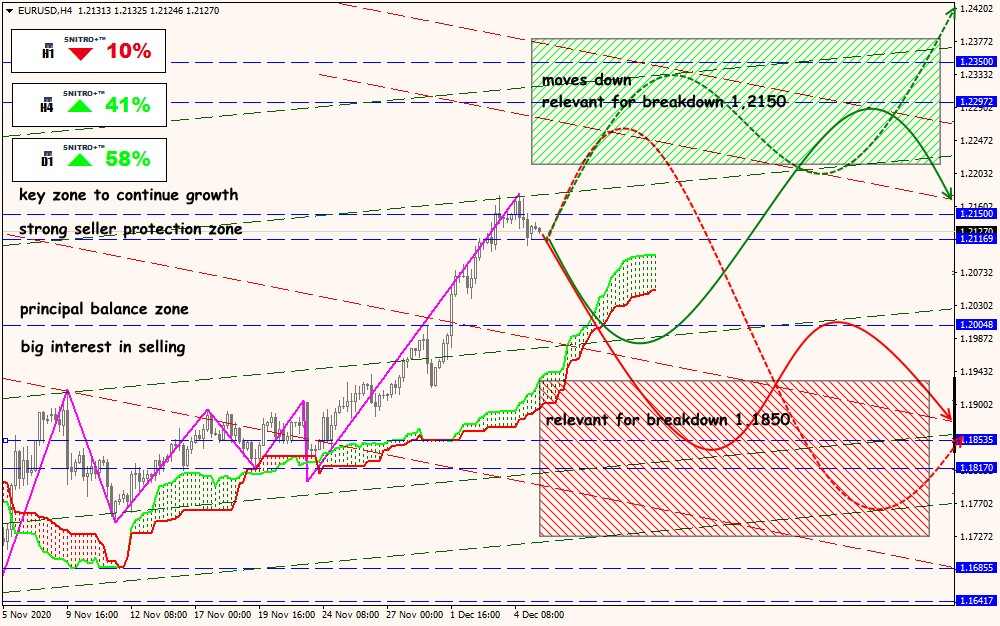 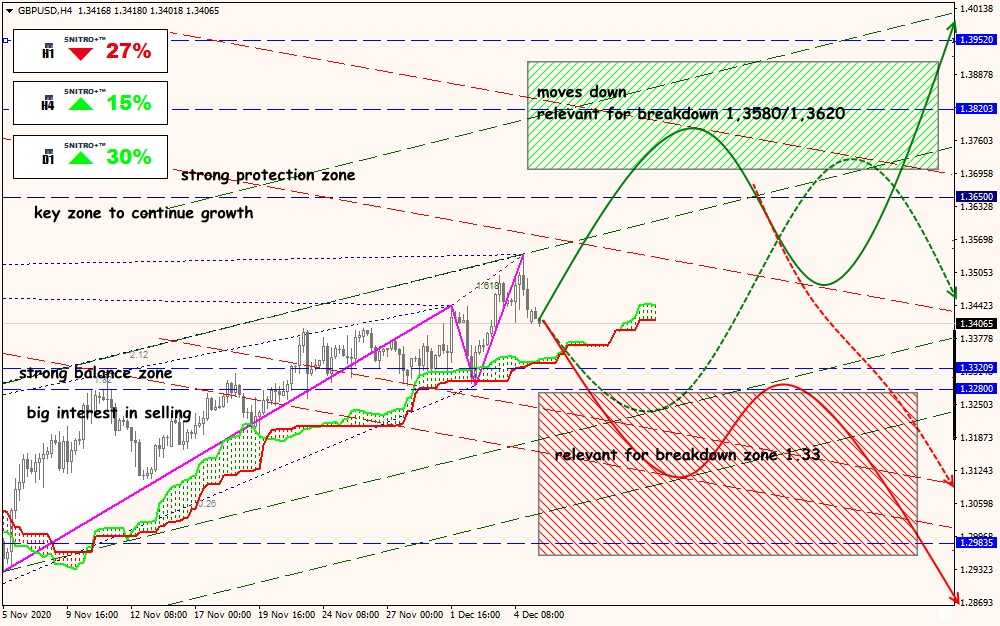 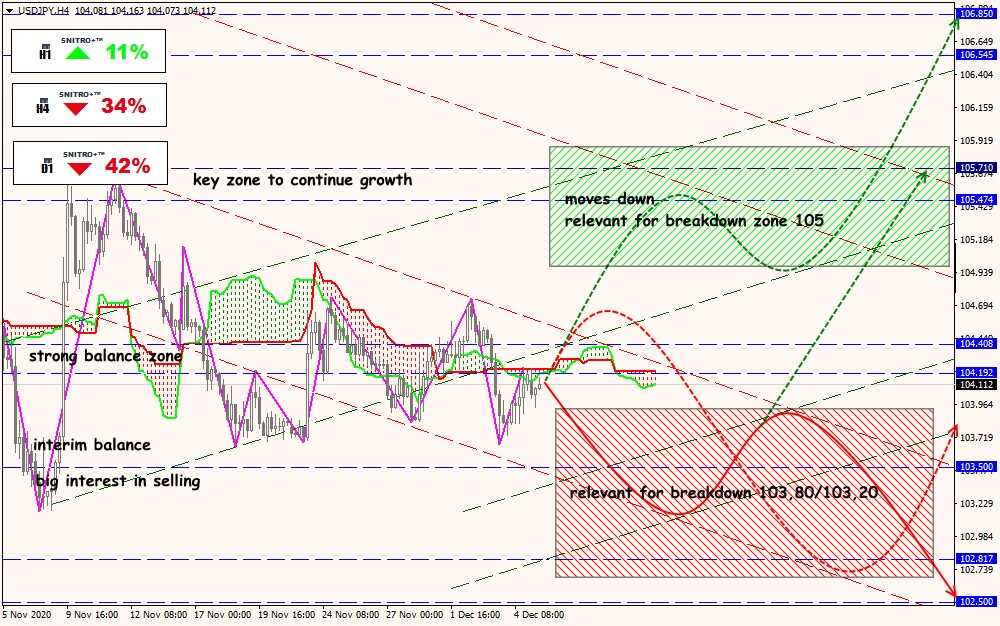 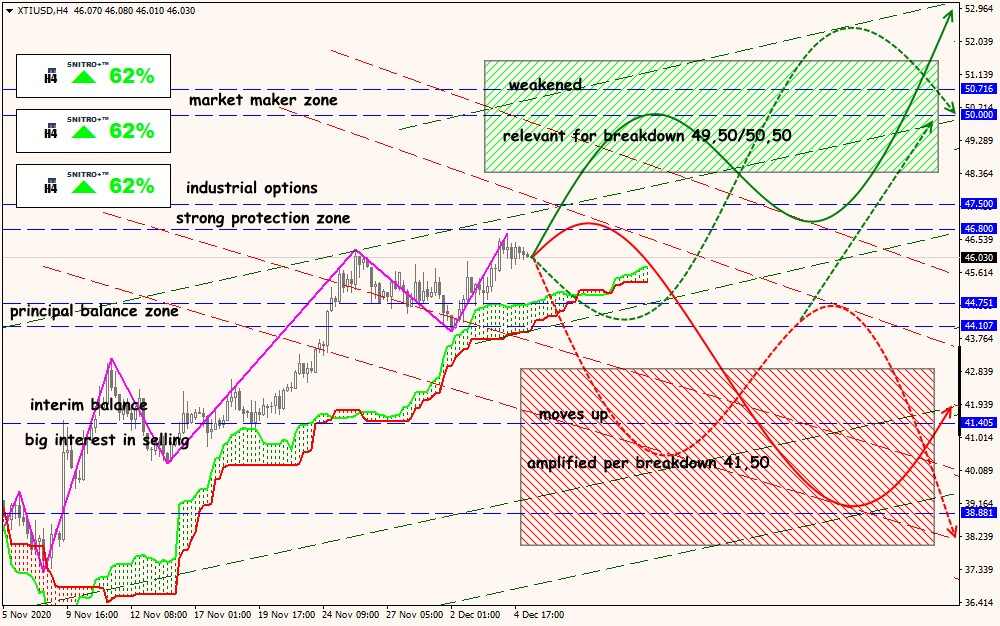