A market without positive: prevention is better than cure

Draghi did not offer anything new, there is no own positive for the euro now; Brexit tries to break a deadlock, but demands the new victims. Shutdown took a break; FRS looks neutrally; Beijing prepares for a fight with Trump.

Optimists try to manage the market, but their efforts are not effective yet.

… kept formulations regarding the rates until the end of summer; Draghi was full of optimism and preferred to speak about geopolitical, but not the European risks. Briefly:

The fact that PMI of three largest economies of the Eurozone is on the verge of recession, the head of the ECB preferred not to discuss though on Thursday the GDP for the 4th quarter publication can confirm a similar situation in Italy.

All negative expectations related to the economy of the Eurozone and the policy of the ECB are already put in the price. Speculators tried to drop euro to the level of large options, but, despite the next number of weak statistics, it was necessary to roll away up.

… on 29 January will take a vote regarding the alternative plan with the rejection of the support of open border with Ireland. Support of a DUP party almost guarantees adoption of the bill but then it is necessary to receive the consent of the EU to correction of already coordinated Brexit option. The insider about telephone conversation of May with Juncker says that Juncker put the constant membership in the Customs union with the EU as a condition of the rejection from the Irish guarantees. This thesis is unacceptable for the ruling coalition and the conflict on this subject can destroy all reached positive. May denies the probability of extension of Article 50 about exit time as in that case she loses the possibility of blackmail of the EU. However, the group of euro figures led by Merkel intends to avoid an exit without trade agreement so the bargaining for Brexit is in full swing.

If the adoption of any decisions which will force to prolong Article 50, pound will be redeemed on falling. If May's project is failed without extension of terms of an exit the pound will fall steeply and it is worth waiting for a new vote of no confidence to the government. If the option demanding a change of the agreement with the EU is started the pound will be under stable pressure until the reply of European Commission.

… at the moment has poorly negative market expectations regarding the policy. On 30 January investors will estimate intentions again:

It is supposed so far that shutdown will «eat» 0.5%-1.0% of GDP growth of the USA in 1 quarter. Statistics, necessary for the analysis, is still not published so decisive statements are postponed until March together with new forecasts and assessment of a result of trade negotiations with China.

… all the misses are ready to be written off for shutdown consequences. The general delay of dynamics is expected though the Bureau of statistics stated that temporary holidays and dismissals of government employees will not have an impact on the number of new jobs. The market will not obtain all indirect data before the publication. Any growth higher than 150K at the accompanying strong data will cause the growth of dollar, but even at weak figures market reaction most likely will be postponed until the next report.

… signed the bill of the temporary termination of shutdown till February 15, but blackmail by the emergency is not repealed until the Congress agrees to «dig» $5.7 billion in the Mexican wall. The arrest of the Republican Roger Stone, the former Trump`s assistant, within the investigation of the special prosecutor Mueller made active the idea of impeachment and added a negative for the dollar.

Now the attention will be focused on the top-level USA-China trade negotiations. There is progress on «easy» questions, more difficult concern intellectual property and transfer of technologies. Chances of reaching an agreement on 30-31 January are minimum. As a real success can be considered the decision on the extension of the period of the moratorium on the increase in duties on the Chinese import. Continuation of a trade war will lead to the growth of dollar, especially if a release of economic data of the USA is better than the forecast.

… did not suffer from the «revolution» in Venezuela yet though of the sanction of the USA can cause a spontaneous increase in prices for raw materials in a middle term, and an official change of the regime (that is improbable!) is capable to lead to production growth in the long term. Most nervously the situation is perceived by refinery capacities of Chevron, PBF Energy, Valero Energy on the American coast of the Gulf of Mexico. Stocks of these companies become cheaper, despite the rally of the stock markets of the USA papers of PBF and Valero already dropped by 1.9% and 2.7% respectively. Nevertheless, trade negotiations of the USA and China remain the main driver for dynamics of oil.

Draghi will act in European Parliament today, but the strong reaction to this speech is not expected; Carney will make a speech at a forum in London tomorrow. The silence period is supposed until the announcement of the decision of FRS on Wednesday.

The forthcoming week will become key for dollar though there is still chaos in statistics. We wait very much for the missed data on retails and durables that will allow to overestimate condition of the economy of the USA and, as a result, prospect of the policy of FRS. In addition to NFP, the reports of ADP, ISM of the industry, research of moods of consumers according to SV and Michigan will be precisely published, GDP of the USA for the 4th quarter – in question. On a good day, today we will be able to see the annual report of the U.S. Congressional Budget Office on prospects of the economy and the budget.

On the Eurozone, it is necessary to trace GDP of EU countries, inflation of the prices of consumers, PMI of the industry. China will please with the PMI in the morning of Thursday and Friday, but against the background of trade negotiations, the market will hardly notice it. 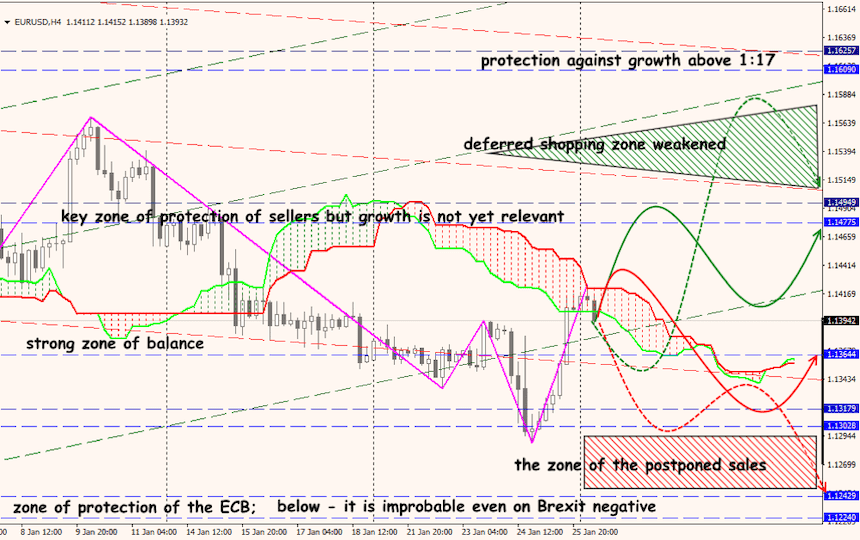 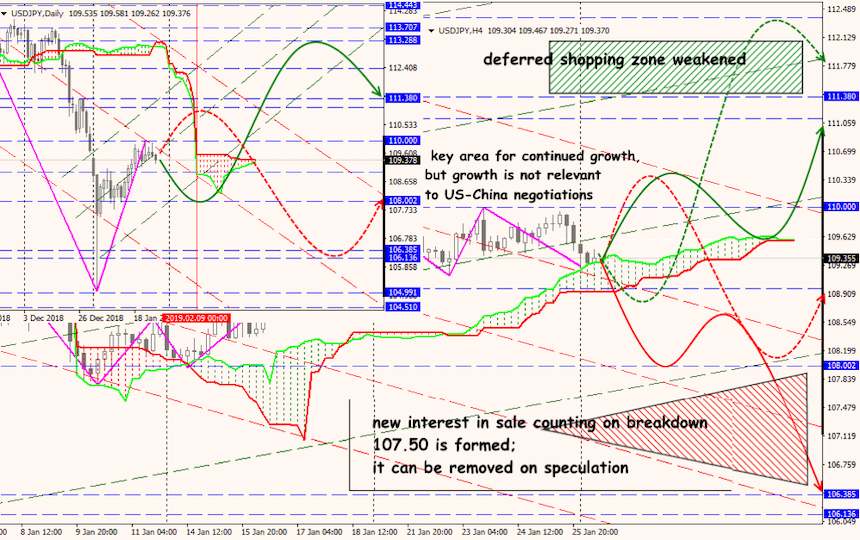