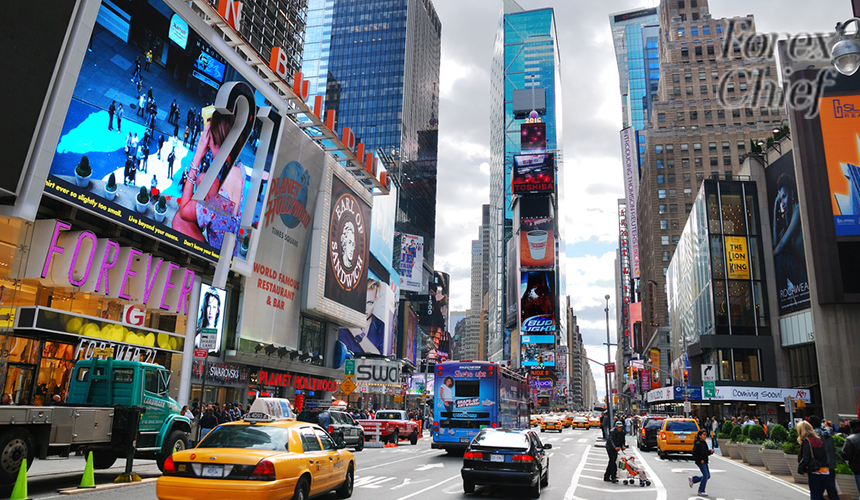 In essence, the USA is, at the same time, the largest global importer and the same significant exporter. Telecommunication equipment and semiconductors, airliners and automobiles, engines and equipment for energy-producing industry, measuring instruments and services are the main export trends of the country.

By all means, the United States economy is the largest in the world. Despite the universal misconception, around a quarter of all goods manufactured and services rendered in the world (GDP) are produced in the USA. That is the most diversified national economy of all existing that held confident leadership in the previous century. Nevertheless, globalization that keeps on accelerating and the strengthening of developing countries economies, which is characteristic of the beginning of this millennium lead to the situation when US economy influence on the global economy is gradually decreasing. That, in turn, cannot but will also influence the exchange rate of the national currency - US dollar.

First of all, United States economy is characterized by predominance of innovation sector. As a result, the country has high-productive industry and well-developed knowledge industry, and a significant part of GDP is dedicated to high-quality and innovative services. As in any other economy, United States economy's main driving force is scientific developments, and one of the main development factors is highly educated, professionally developed and invention targeted human capital. At the same time, such a strong US dependence on science achievements puts the country into another dependence - dependence on other countries' scientific and technical progress.

Another important characteristic of United States economy is its diversified character, i.e. the country has a wide range of manufactured goods and rendered services. That not only helps the USA to penetrate into all segments of global economy, but also assists in significant reduction of risks: a crisis in one industry or business area does not have a deadly effect on the whole country's economy.

The third as important characteristic of the American economy model is business globalization, i.e. high level of integration into the global economy. On one side, that makes United States economy more vulnerable from without (it is here that diversification helps), on the other side, it helps the United States to have significant influence on the economies of other countries. However that may be, by now, a huge part of production has already been moved out of the country: large American companies make a big part of their profits abroad.

A big part of the whole American GDP - almost 80% - falls on services sector. First of all, those are education and science, trade and finances, transportation and communications services, health care and services provided by various domestic state institutions. Besides that, for the last decade, the volume of rendered marketing, management, and consulting services, as well as IT services has grown significantly.

The share of material production sector that embraces the remaining almost 20% of the country's GDP, is characterized, first of all, by the tendency for reduction of raw material industry share. Nevertheless, about 40% of all US need for electric energy is satisfied by means of domestic oil mining - the country ranks third in the world in mining of this type of resource. Mining of domestic shale gas has been also boosted lately. At the same time, industrial production has development priority; moreover, United States economy ranks first in the world in regard to this indicator. First of all, that is automobile manufacturing and aerospace industry, electronics and chemical industry, especially oil refining.

The agricultural share produces about 2% of the country's GNP. Tobacco cultivation, vegetable farming, gardening, grain farming are prompted not so much by means of fertile soils and favorable climate, as by the use of latest scientific and technological progress achievements and exceptional entrepreneurial spirit of farmers. In particular, today, around 16% of all grain production in the world falls on the United States' share. The growth of this indicators was achieved not by means of agricultural land expansion, but due to an increase in productivity. The most "important" crops cultivated by American farmers are corn (ranks first in the world) and wheat (ranks third).

Having such economy structure, both the development of the country's foreign trade or its investments abroad must be taken into account. At the same time, the United States imports both cutting-edge technologies and goods. In essence, the USA is, at the same time, the largest global importer and the same significant exporter. Telecommunication equipment and semiconductors, airliners and automobiles, engines and equipment for energy-producing industry, measuring instruments and services are the main export trends of the country. The main US export partners are Canada, Japan, Mexico, Great Britain, South Korea, and Taiwan.

Nevertheless, the role of imports in United States economy should not be underestimated. Moreover, imports in American economy have even more significance that exports. High-technology goods: telecommunication facilities, as well as computers and computer peripherals, home electronics, cars and mechanical machinery, transportation vehicles, clothing - importing of these types of goods into the USA has experienced significant growth over the last fifteen years. As strange as it may be, the largest importers into the USA are the same countries that are the main consumers of American export, except perhaps China. China, predominantly, imports its goods into the United States. Besides, the USA is the largest oil and gas importer.

Despite numerous financial crises and analysts' prognoses, United States financial system, in particular, has been the strongest during the last several centuries, and US dollar is the negotiable global reserve currency. There is no central bank in the USA as such; its functions are carried out by Federal Reserve System (FRS). The main difference from the central banks of other countries is that FRS ownership form is private and not government-owned. Although FRS is subject to a separate national law that regulates its activity, it is still an independent body: decisions that it makes in regard to credit and monetary policy do not require either US President's or any other executive to legislative body's approval. At the same time, FRS receives certain powers from US Congress and is formally under its control: the Congress, at any moment, may change legislation that regulates its activity.

FRS' "hands" are Federal Reserve banks through which the latter conducts its policy; that is why their activity has significant influence on the exchange rate of the national currency. Two main types of banks form the country's banking system: commercial and investment banks. Commercial banks are organizations that carry out financing and perform payment functions, including operations regarding credit cards and checks. FRS controls the activity of those financial institutions. Investment banks are not very traditional banking institutions, since their area of activity does not include attraction of deposits or lending activities. Their activity embraces three main areas: underwriting, securities trade and consulting services in the areas of company takeover and merger, as well as in the area of successful investments. Investment banks activity is controlled by U.S. Securities and Exchange Commission. Stock and commodity exchanges are the main element of the US financial system. It is through them that a huge part of purchase and sale transactions of goods and securities passes. This being the case, not only American but also foreign companies are trade participants at US exchange platforms.

It should be noted that the USA is the country with the largest national debt. Nevertheless, it is important to understand that the main national debt "investor" is the state itself. If the extent of the national debt is "cleared" of mutual obligations among federal and local government bodies and from corporate obligations, then it will turn out that the "pure" debt amount. i.e. immediate American debt to foreign creditors will be, at least, twice as less.

The main financial factors that determine US dollar rate are the following:

Federal funds rate. That rate shows the interest rate against which credit institutions provide short-term loans (overnights) to each other. The size of this rate changes under the change of the country's monetary and credit policy direction.

Discount rate. It shows the interest rate against which FRS provides short-term loans to commercial banks. That rate is always below FF rate, and, although it is not very important by itself, any change of it always implies the change of the country's financial policy that will mandatorily lead to the change of the national currency exchange rate.

"Indicator" bonds. These are long-term bonds whose period of repayment is 30 years. In essence, they characterize market expectations regarding inflation rate. Strictly speaking, there is no obvious connection between the market value of these obligations and dollar exchange rate, as such. However, the following rule usually applies: the reduction of bonds market value leads to the decline of national currency exchange rate. Nevertheless, it should be taken into account that this rule applies in case of inflation rise threat. If there is not such threat, then currency rate may even grow. However, it is important to understand that prices at Forex are, in no small measure, formed directly by market participant expectations; therefore, the changes of value of such bonds, in any case, lead to currency exchange rate fluctuations. The volume of such bonds has been decreasing lately, that is why bonds with repayment period of 10 years are taken into account now. Meanwhile, in this case, the rate of return of these bonds is compared against that of similar bonds issued in other currencies. Here, the rule is simple: the higher the rate of return is the more expensive the currency will be.

Three-month Eurodollar Deposit Rates. Here, it deals with deposits in dollars that are issued by foreign banks outside of the USA. That is one of important instruments used when assessing interest rates in different currencies. In turn, the difference under those rates has direct and immediate effect on national currencies exchange rate.

FRS operation in open market. With the help of such operations, FRS gives signals of changes in its credit and monetary policy, and that leads to the change of dollar exchange rate.

U.S. Treasury activities. Publicizing information regarding the size of national debt, as well as making decisions in regard to fiscal budget, U.S. Treasury exercises a significant influence on the national currency exchange rate.

In addition, various economic indicators that are published in the USA have a great effect on US dollar exchange rate. The most important are consumer prices and manufacturer prices indexes (CPI and PPI), extent of GDP, trade balance, volumes of industrial production, residential construction, NAPM index, cost of labor force, volumes of residential construction and construction permits obtained. Besides, employment report is of special importance. Both unemployment level and wage rate are included in it.

Besides, dollar exchange rate is affected by stock market indicators and namely, by main stock indexes:

- Dow-Jones Index. That industrial index is in direct connection with dollar exchange rate and has the most powerful effect on it. That influence is stipulated by the fact that foreign investors, when purchasing American securities, have to purchase US dollars, too. Correspondingly, the higher that index rate is, the more income, and, therefore, attractive for investors, the stocks of American companies are.

- S&P 500 Index. That is the stock index reflecting the change of stock price of 500 American stock companies that have the most complete representation of the county's various industries. This is a very important indicator that was named "a barometer for the US economy". Its influence on dollar exchange rate is similar to that of the previous index.

- NASDAQ Index. That is an OTC market index that characterizes American high-technology markets. However, since U.S. economy is characterized as exceptionally technology-intensive, that index reflects the country's economy condition in whole.