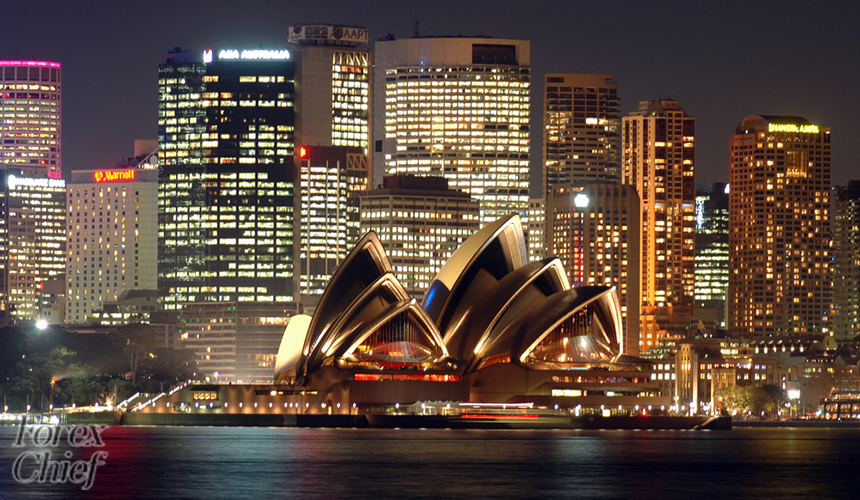 Continuously high interest rates, economy that is developing steadily even though not by leaps and bounds, practically complete absence of currency intervention on the part of official bodies - all of that is the achievement made with the help of the Australian state policy.

It is not the biggest (its territory is 10 times less that of the USA), not the most populated (fiftieth place in the world), not having the fastest growing GDP (in the second ten of the global rating), Australia, nevertheless, is the country that has one of the strongest global economies and is the issuer of one of the most traded Forex currencies: Australian dollar. However, Aussie rate became floating (liberal) only starting from 1983. So what is the secret of the "Australian economic miracle"?

Australia is the country that is surprisingly rich with natural resources that are in the highest demand globally. Gold, oil, diamonds and nickel, uranium and iron ore, coal and gas - the list of mineral deposits that the country has in abundance is far from being complete. Favorable geographic situation became the basis for profitable trade in Asian markets with the countries that have actively developing economies and need natural resources, which are in abundance in Australia. Continuously high interest rates, economy that is developing steadily even though not by leaps and bounds, practically complete absence of currency intervention on the part of official bodies - all of that is the achievement made with the help of the Australian state policy. In other words, three pillars of success made by the country's economy are based on three "G": geology, geography, and government policy.

Almost 70% of Australian GDP comes from the services sector: mining industry contributes one tenth of GDP, another 9% is added by mining of other mineral deposits, agriculture - about 12% of GDP volume. Such industries as electrical technology, metallurgy and chemical industries, as well as automobile manufacturing are developed very well. Besides, Australia is the largest producer of electrical energy in the world. Closing the second ten of the largest global exporters rating (19th place), Australia, at the same time, holds the same position as an importer. It is easier to name the goods that are not produced in this country: Australia has a very good range of manufactured products - from clothing and foods to the most sophisticated items of precision instruments industry and high-technology complexes that are needed in the production of plastic and oil refining industry. At the same time, Australia is the largest exporter of the highest global quality wool and also, one of the largest exporters of wheat and meat. Besides, the country supplies fruit, milk products, sugar, rice, cotton, and high-quality wines to global markets. In itself, economy growth rate, first of all, depends, in particular, on mining industry and agricultural sectors. Those products, in particular, are exported by the country to East Asian markets. Besides, Australia exports products to the USA.

The Reserve Bank of Australia - RBA - serves as the country's central bank. As in many other countries, this country's Central Bank has the responsibility to implement monetary and financial policy that is designed to ensure the stability of the national currency. Besides, RBA is responsible for assisting in reduction of unemployment and in economic growth as well as in the growth of the local population prosperity.

One of the methods that RBA uses for implementation of those tasks is keeping annual inflation growth at the level of 2-3%. All decisions regarding the change of the country's monetary policy are made by the RBA's Committee for Monetary Policy; the committee consists of the RBA Governor and his deputy, Secretary of the Treasury, and six independent experts who are appointed by the government of Australia. At the same time, even such close supervision on the part of the government could not prevent forming the so called financial bubble that is characteristic of the Australian housing sector. The main Centrals Bank's difficulties in regulating the economy are low predictability of the country's inventory cycle and the influence of the latter on capital movement and trade balance.

As a large importer, Australia heavily depends on the trade relations with its, first of all, Asian partners. During previous economic cycles, a high demand for Australian mineral deposits on the part of such countries as India, China, and - to a lesser extent, Japan led to the fact that Australian dollar strengthened its positions. However, the demand for these resources reduced, and, as a result, Aussie rate fell. At the same time, Australian economy specifics leads to the fact that in case of price growth for raw material industry goods, the stability of the largest global economies that includes some European countries, USA, Japan, and Canada is threatened. In case with Australia, it is just the opposite: against the background of price growth for raw materials this country's economy prospers more and more. As a result, Aussie becomes a great currency investment: expenses for industrial production, which is well-developed in the countries with large economies, also grow because of price growth for raw materials, and their national currency rates have the tendency to decline.

Some of important publications that have immediate effect on the national currency rate are, by all means, reports on GDP growth, volumes of retail sale and industrial production, dynamics of trade balance and inflation growth rate. The indicators for these positions are regularly published by the country's government and they are accessible to public. Besides, we shouldn't lose the sight of the RBA interest rate dynamics; therefore, it is important to pay close attention to the reports of the Central Bank's meetings. Also, it is important to keep in mind the statistical data on unemployment level and track all changes of state policy. It is natural that, as in cases with any other currency, information regarding natural disasters, elections, and force-majeure circumstances should not be neglected. As to the AUD rate specifics, it is worth keeping in mind that the basis for the country's economy are raw material resources. For this reason, information regarding grain crops harvest level, economic indicators on mining industry, as well as global prices for metals have an important effect on the Aussie exchange rate. All these data are regularly published in the Internet by the organization called ABARES - Australian Bureau of Agricultural and Resource Economics and Sciences.

While the major part of the developed countries, because of strong economic ties, trade in very close tandem with this or another country, things in Australia are different. Industrial goods make a small part of this country's exports, and their larger part goes to Asian developing countries. On one side, that leads to the fact that Australian economy is independent of the world leaders' economies; however, it puts the country into direct dependence on global prices for raw materials. That makes AUD an extremely volatile currency, and leaps of prices lead to serious fluctuations of Aussie. Besides, the economic condition of countries that import raw materials is as important. In case of Australia, they are, first of all, China and India. Moreover, while selling raw materials to those countries, Australia imports equipment and consumption goods from them. Besides, a good half of all Forex carry trade transactions with the participation of Japanese yen fall on Australian dollar. Japanese interest rates are very low in regard to Australian rates, and Japan and Australia are in the same time zone; that is why Aussie assets become in high demand for all Forex participants who play in the market with the help of carry trade. As a result, in order for Australian dollar exchange rate to change, it is enough to receive a single rumor regarding the coming change of central banks' discount rate of any large country with a low level of interest rates.

Being a really rich country, Australia is still in a serious danger of dependence on the condition in its agricultural sector and mining industry. High interest rates and prices for Australian products make the goods of this country noncompetitive at global markets. All of that leads to the situation that Aussie rate will stay dependent on the global prices for raw materials and the development of the countries that are the largest importers of Australian raw materials. Nevertheless, analysts don't see any reasons why AUD can lose its importance in the currency market in the nearest several years.