Yuan vs Dollar or the «Biden factor»: everything is just beginning!

US President «defeated» COVID-19; China blackmails with the yuan exchange rate; Europe «divides» the British fish. Politicians prefer the process over the result. Markets are reeling with Trump.

Markets did not react to the publication of the FRS protocol, although the document can be considered quite aggressive. Nevertheless, if Congress passes a fiscal stimulus package, it should be borne in mind that the Fed's policy may be more stringent than investors currently expect.

Trump's behaviour in the outgoing week can hardly be called reasonable, even if it is associated with the consequences of COVID-19 infection. The announcement of the end of negotiations with the Democrats on the fiscal stimulus package is a normal step in a situation where no compromise bill has a chance to pass through the Senate before the change in the current composition of Congress.

Stock market fell, Donald got scared and bombarded his Twitter account with messages that he was ready to sign separate bills to help Americans and small businesses. Trump continues to increase the size of the stimulus package without waiting for the outcome of the negotiations, thereby preventing his advisers from defending any positive in the potential bill.

An insider says that at a Saturday meeting between Treasury Department Mnuchin and Senate Republicans, the protest was so strong that Steve said: «I will convey your objections to the president, but you should all come to my funeral.» The Republicans want to distance themselves from Trump, because they consider his loss in the elections obvious and do not intend to «sink with the Titanic». House Speaker Nancy Pelosi ruled out the possibility of moving forward in helping the aviation industry without broad agreement between Republicans and Democrats.

Show of Trump's rapid (in 7 days!) «recovery» from the coronavirus causes shock and aggressive misunderstanding. If in the United States they can heal COVID patients in just a couple of days, then why have more than 210 thousand citizens already died and the number of infected is approaching a million?! Trump did not do any testing on October 11 − the president has no officially confirmed negative test result. A second round of debate with Baden, previously scheduled for October 15, has been canceled after Trump refused to hold it remotely. The third round is scheduled for October 22nd. The Democrats initiated a bill to create a commission that would assess the physical and mental state of Donald Trump and conclude whether he is capable of fulfilling the duties of the president. If the commission decides not, Trump could be removed from office. What will happen in this case with the elections is unknown, so we get the popcorn and wait.

The EU and Britain say there is clear progress in the talks, although differences remain on key issues. London considers the main obstacle to the issue of EU countries' access to Britain's fish-rich waters, but, according to the insider, the EU is ready to redistribute quotas within the bloc, thereby satisfying the ambitions of France. The problem of «equality» can be solved through the adoption of agreements, according to which the EU will have the right to unilaterally increase duties on British goods. Britain's internal market law remains a problem for the EU, but if Johnson agrees to repeal it when a common trade deal is reached, this obstacle will be leveled.

The EU Leaders' Summit on October 15-16 will be dedicated exclusively to Brexit. It is highly likely that EU leaders will agree on fish quotas, paving the way for an agreement in early November. On this positive, one should expect a sharp rise in the pound and euro.

According to Bloomberg, at the moment world oil reserves exceed the 5-year average by 220 million barrels. Nevertheless, OPEC, represented by Mohammed Barkindo, believes that the main negative in the energy market has been overcome, and world reserves of raw materials will reach the norm by mid-2021. OPEC's annual World Oil Outlook reports that oil demand will reach a historic peak in late 2030 and then begin to decline.

The Trump administration announced «fresh» large-scale sanctions on Iran's financial sector to force Tehran into a new nuclear deal and blacklisted 18 banks with contacts with Iranian businesses. Such a move clearly shows an oil trail: Biden's victory in the elections will allow Iran to immediately increase oil production by more than 0.5 million bbl / d, which is «a lot» for the current market. Saudi Arabia is considering canceling the program to increase oil production early next year. Experts believe that the prospects for increasing oil production in Iran and Libya will be the key topic of the December OPEC + meeting.

Beijing has finally turned on its main factor: the yuan is breaking another support and for the first time since 2005 is aiming for 6.40. The Chinese regulator is not going to prevent this and is betting on opening its financial market for investors, offering investments in Chinese assets not only through Hong Kong or New York, but also through Shanghai and Shenzhen.

Trump threatens China again, but whoever wins the US elections will not be able to quickly neutralize the negative in relations. But if we compare the options for Trump's re-election and the Biden presidency from the prospects for the development of a trade war, then here the priority is for a Democrat. It is the yuan that teaches the markets to new levels.

We would like to draw your attention to the Brexit negotiations. The continuation of negotiations between Trump and Pelosi will force investors to buy shares ahead of the reporting season of S&P companies.

A lot of speeches by the FRS members are expected. Lagarde will be attending the IMF / World Bank Annual Meeting and will appear in online discussion format throughout the week, but Lady Christine is unlikely to say anything new. Economic reports will have the least impact on the markets, but consumer price inflation and US retail sales will adjust the Fed's rhetoric and market expectations for the future of the QE program. 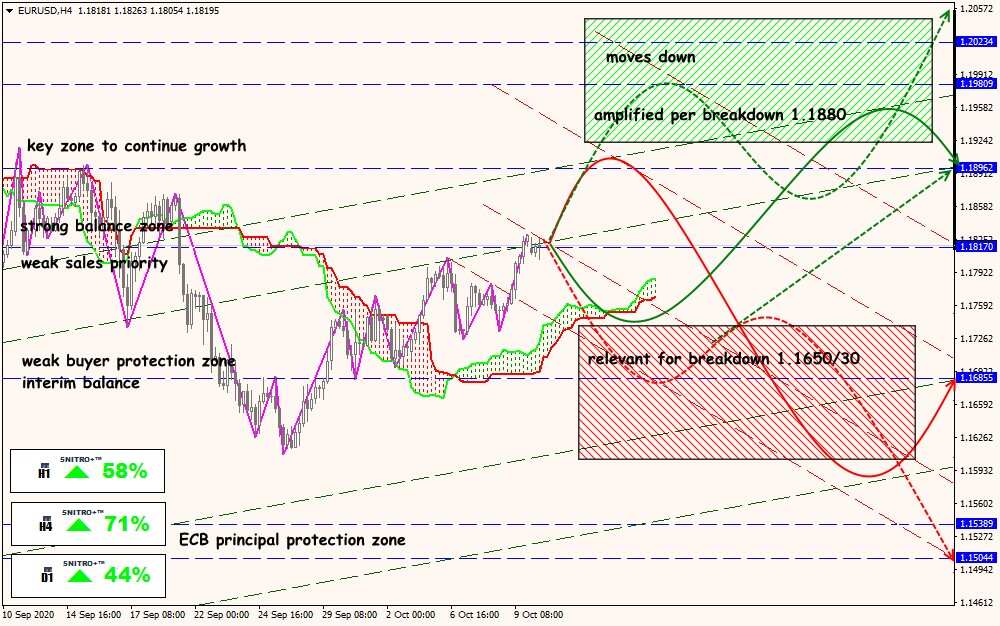 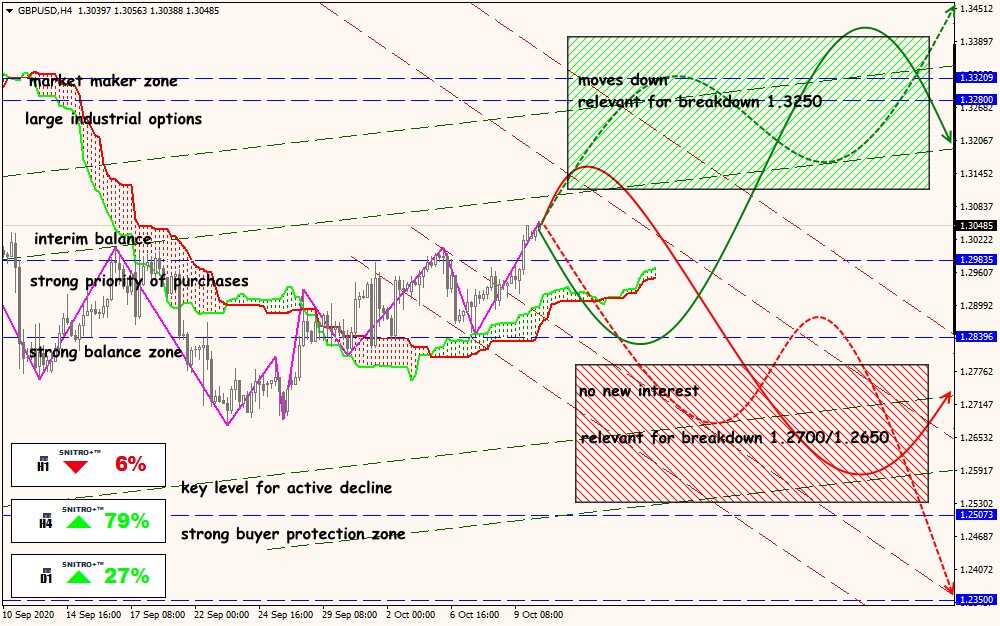 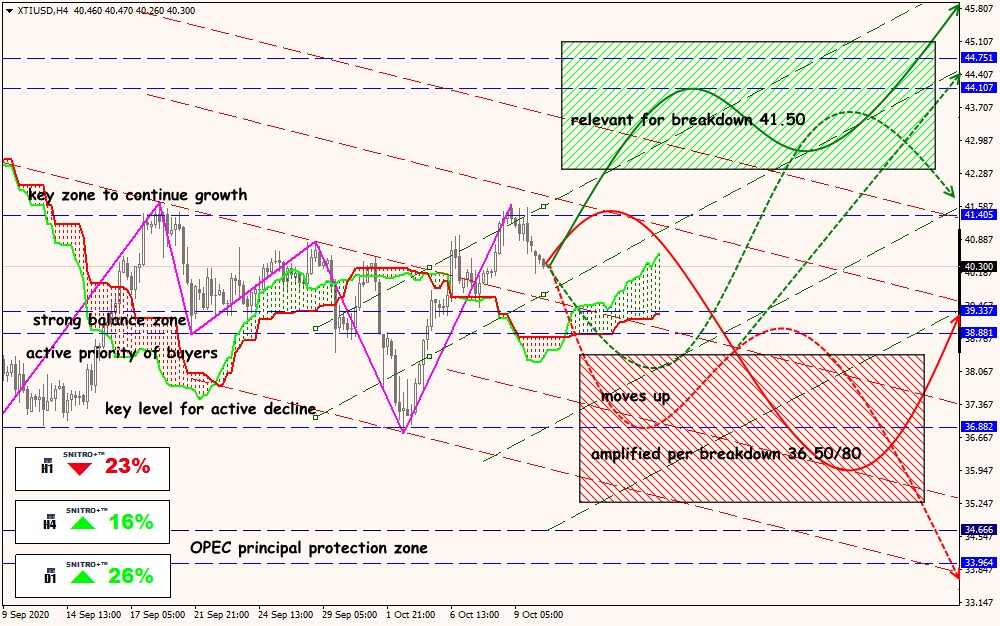