When partners can't agree, then the markets it's not good

The EU summit did not yield results: Trump goes online; China is selling oil. The coronavirus crisis is gradually turning into a standard economic one.

The summit of EU leaders can be considered a failure: four days of almost round-the-clock negotiations, including private consultations, did not yield any results.

Finland has unexpectedly joined the four northern «thrifty» countries (Austria, Denmark, the Netherlands, Sweden) with demands to reduce the total size of the recovery fund, the size of grants and toughen the conditions for receiving assistance.

Although dissatisfied with the current situation, the union members acknowledge that the redistribution of money from northern to southern countries eliminates the political risks of the Eurozone collapse and strengthens the role of the euro as a world reserve currency.

But judging by today's comments, the person to blame for all the problems has been found: it is the Prime Minister of the Netherlands, Mark Rutte, who vetoed the global agreement. Dutch taxpayers are considered the largest donors to the EU budget, and any idea to give to other countries of the union free of charge or to lend money is rejected by them in principle. Moreover, Rutte insists that all funds provided be tightly linked to reforms and related reporting.

EU leaders publicly went into conflict yesterday and turned to personal insults, but Macron's threats and Merkel's harsh diplomacy did not help. None of the many compromise options was adopted, the only more or less agreed idea can be considered to reduce the total fund to €700 billion and the minimum amount of grants to €400 billion. There is no progress in the budget for 2021 − 2027.

Now analysts are actively looking for positive things in the comments of the summit participants, the euro is still growing on speculative purchases. Conscious evaluation of the results will come later. EU leaders will continue their debate at the July 27-28 summit.

About other events − briefly:

No surprises: ECB policy has remained unchanged, growth prospects are unclear, the need for significant monetary stimulus is confirmed. Kristin Lagarde chose to remain silent about unpleasant discussions, but an insider published after the meeting showed that the split within the ECB was intensifying and, with economic recovery, it was the Bundesbank’s aggressive position that would become a priority. The ECB will resume its policy review in September. The adoption of the agreement on the EU recovery fund will relieve the financial regulator of responsibility for the fragmentation of the Eurozone debt market, which will allow tightening the policy, at least by increasing the deposit rate.

Head of BOE Bailey followed Powell and Lagarde to repeat the standard formula: «the economy is recovering, but the main sectors remain weak, and long-term goals are foggy». Alas, for London, the coronavirus fog is compounded by its own problems.

Today opens a new round of negotiations on Brexit; both sides hope for a breakthrough in addressing major issues. Political concessions from Britain should be the key to progress, but EU leaders have clearly not taken up this issue, and Johnson's team has nothing new to offer. Alas, the prime minister never reached Brussels to personally meet with Ursula von der Leyen and hold private consultations with EU leaders, and now he declares his readiness to terminate any negotiations altogether.

The markets remembered the deplorable state of the UK economy and that the BOE was seriously considering introducing negative rates. The GDP report disappointed not only with weak growth of the main indicator, but also with details. The service sector activity index rose only 0.9% in May (+ 4.8% forecast), and it is already clear that the announced budget stimulus measures are clearly not enough.

OPEC does not rule out the revision of quotas in December, depending on the situation with the coronavirus and the pace of global economic recovery. Overall oil reserves continue to decline, but China's oil storage facilities are still overflowing. China is actively selling cheap raw materials from reserves, through the Shanghai International Energy Exchange (INE) more than 1 million barrels have already been sold to consumers in the Middle East and Africa. The situation for the Cartel, which intends to increase production in August, is, to put it mildly, unpleasant. Moreover, many people have appeared who want to make money on arbitrage deals, since Saudi Arabia, Iraq and other oil producers have recently raised their official selling prices.

After the election rally in Oklahoma caused the massive infection of COVID-19, Trump decided to communicate with his supporters in the form of teleconferences, although this format takes away from the President of the United States up to 50% of personal verbal influence. The first TELE-Rally-Donald session was held on July 17, the main topic was the global enemy.

US-China relations continue to heat up: now the blow fell on Chinese exchanges, which over the past week lost 5-12%. Business loyal to Trump hates the fact that China's GDP grew 3.2% in the second quarter, while the same US indicator is likely to drop by about 10%. A more active economic recovery allows Chinese exporters to actively increase their share in almost all markets, and political aggression does not interfere with this process.

There are no statistics for China. There was a period of silence at the Fed before the July 29 meeting. Lagarde's speech is not officially planned, but there will certainly be comments on the outcome of the EU leaders' summit. 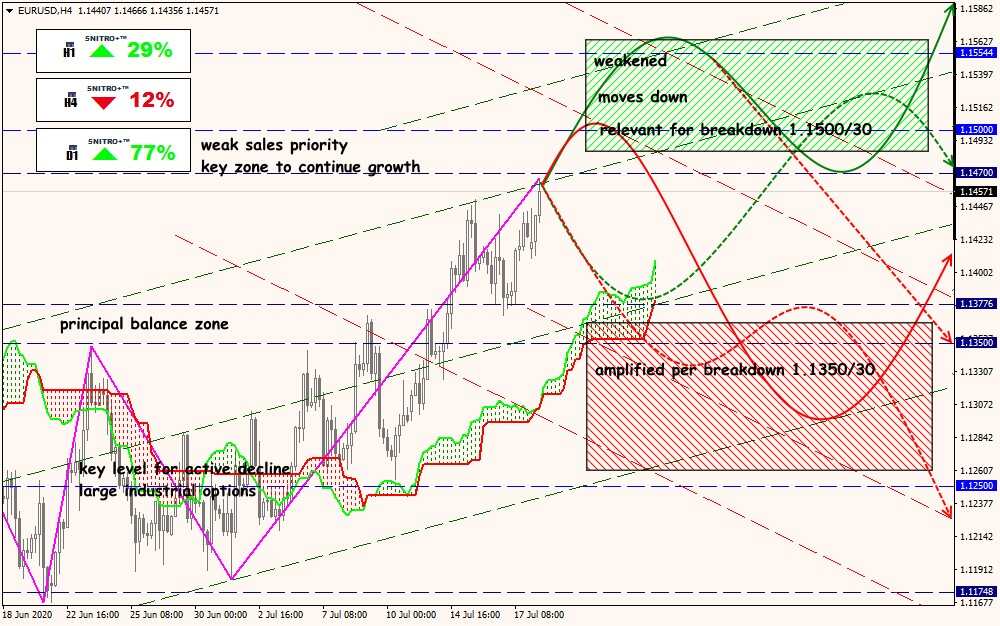 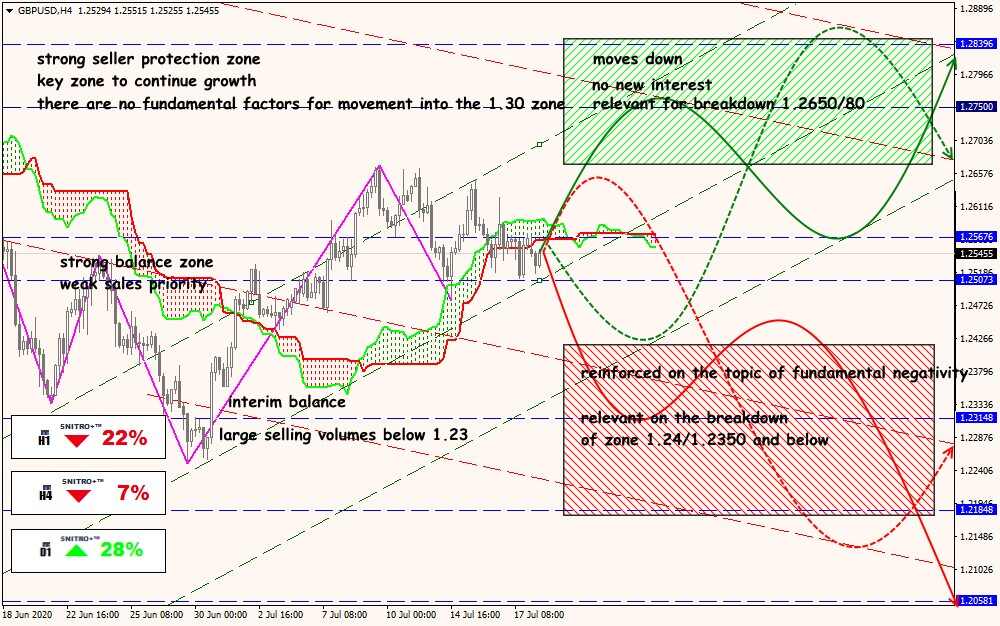 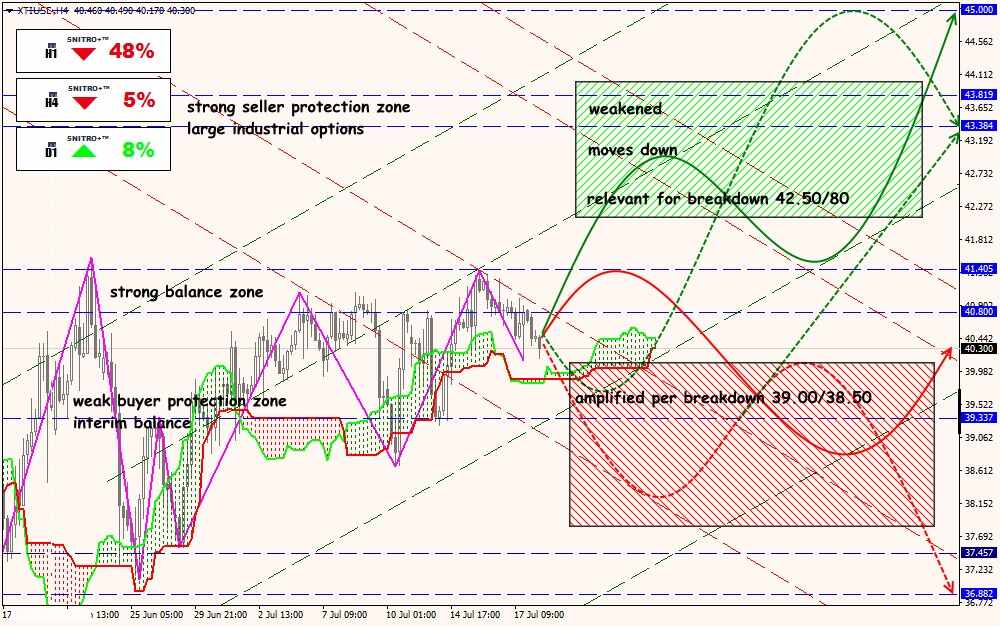