Walls in a political interior

The European currency was the winner of the week; Yellen and Draghi haven't managed to blow up the markets.

Blackmail by a wall on the border with Mexico continues; on Wednesday you may expect a resumption of negotiations on Brexit. China buys up oil, and the fallen dollar has generated consumer activity in bonds, gold and actions.

Principal bankers of the world have confirmed confidence in tomorrow, but haven't found the answer to the main issue: inflation is still much lower than target 2% and there are no effective methods of fight against this factor so far. Japan accuses inhabitants who don't hurry to spend savings; Europe − the enterprises which don't hurry to increase the salary; the USA – the whole world from China to oil and trade in drugs.

Yellen`s speech in Jackson Hole didn't contain any useful comments on prospects of monetary policy and assessment of the situation in the economy of the USA, except for the need of saving tough rules of financial regulation that can be perceived as implicit criticism of Trump. In several seconds after the publication investors have sold dollar on all market, the yield of state treasury bills of the USA has fallen sharply. After the colleague, Draghi has focused on the harm of protectionism for the world economy and I didn't begin to comment on prospects for monetary policy of the ECB, as a result, obtain similar reaction: large short-positions on EUR/USD have been closed, pulse growth has led to updating of a maximum of a year. Mario has traditionally answered the block of questions of Eurozone economy recovery thanks to incentives of the ECB, that has caused feeble attempts of the sale of euro on the closing of the week. An exit from euroQE will only be discussed at a meeting of the ECB in September, it is possible to wait for the decision not earlier than November.

It is clear, that decline of dollar was actively helped by low liquidity, therefore, at the opening of the week, it is worth waiting for a correction, at least, for 20-30%. The rare unanimity of heads of two world Central Banks only confirms rejection of Trump policy by the economic world; chances of the second term for Yellen sharply fall and in general, the attention of the markets to the current policy and rhetoric of FRS will decrease. Chances of increase in rates at FOMC meeting on September 19-20 less, but statements concerning the reduction of balance – about $4.5 trillion are planned.

Trump in the course of the increase in a ceiling of a national debt is ready to allow a default if the Congress doesn't give money for a notorious wall on the border with Mexico. Increase in level of debt requires an absolute majority of the Senate (60 voices from 100), and at the moment Republicans in the Senate 52 persons. Democrats resist on blackmail by the Wall and it is improbable to receive necessary 8 votes especially as also many Republicans are ready to press for the president need of reduction of operating costs. Against the background of this fight the next start of rockets by North Korea, free pardon by Trump of the racist Joe Arpaio and progress in Mueller's investigation look small pranks. Investors won't buy dollar until the situation with the Wall isn't preserved, at least, for a year. The first opportunity for Trump to agree will appear at a meeting with the leader of most the Senate McConnell (after September 4) especially as on Wednesday the next statement of Trump on tax reform is planned.

The pound in the first half of week decreased against US dollar, but in the next days has managed to restore all lost positions − positive data on PSNB (+₤0,2 billion − the first surplus since 2002) have given support. According to Bloomberg, May has confirmed intentions to work closely with the European Court and also intends to oblige the public companies to keep in open access data on the salary of heads of firms and their employees within the program of reforming of corporate management; more radical measures, such as granting special places for workers in the board of directors and obligatory vote of shareholders on salary, are postponed so far.

The documents published by Britain in the last week don't give optimism in the achievement of a compromise: the EU doesn't consider the current situation sufficient to start a discussion of the new trade agreement in October. If as a result of the forthcoming round the amount of a payment for an exit from the EU is coordinated the pound will obtain a reason for growth, and EUR/GBP will actively be developed down.

China under pressure from the USA, to the detriment of the interests, is ready to limit significantly trade with North Korea. At the same time, Beijing intends to advocate firmly the interests of the country and the companies in trade investigations of the USA, in particular, charges of violation of the intellectual property and trade restriction. Along with capital outflow restriction policy, the government will continue to give support to the Chinese business investing in the local companies, but will strengthen control over transactions.

The tension in a political point of the USA-China increases and the possibility of oil blackmail is also not excluded. Sharp growth of the Chinese import volume and conclusion of the OPEK+ agreement already promoted stabilization of the prices of black gold. At the moment Celestial Empire could save up about 679 million barrel in strategic stocks, as a result has exceeded the similar level of the USA. Now, if growth rates of import of oil to China begin to decrease, it will be a notable blow to the world prices.

The ECB since Thursday begins «week of silence» before a meeting on September 7, but the hidden insider in the press it is impossible to exclude. The growth of euro can lead to statements of members of the Central Banks or/and governments of the southern EU countries whose opinions Draghi can quite take as a basis for the verbal interventions.

The current week we wait for the next NFP: all have got used that labor market of the USA in an excellent state, therefore, the failure report can appeal another panic sale, only the strong growth of salaries is necessary to dollar for steady growth. In this time the market won't obtain indirect data before NFP − ISM will be published later, as well as a final assessment of PMI, and the report of ADP this year most often doesn't coincide with official data even in the direction.

Also we pay attention to GDP of the USA for the 2nd quarter, the report of ADP, inflation of consumer expenses for July, personal income and expenses; on the Eurozone data on labor market of the countries of the Eurozone and PMI of the industry and also preliminary estimate on growth of inflation in August will be published. Confirmation of acceleration of growth will become one more bull signal for euro, when falling the rate of inflation it is necessary to expect a reduction of long positions on euro. 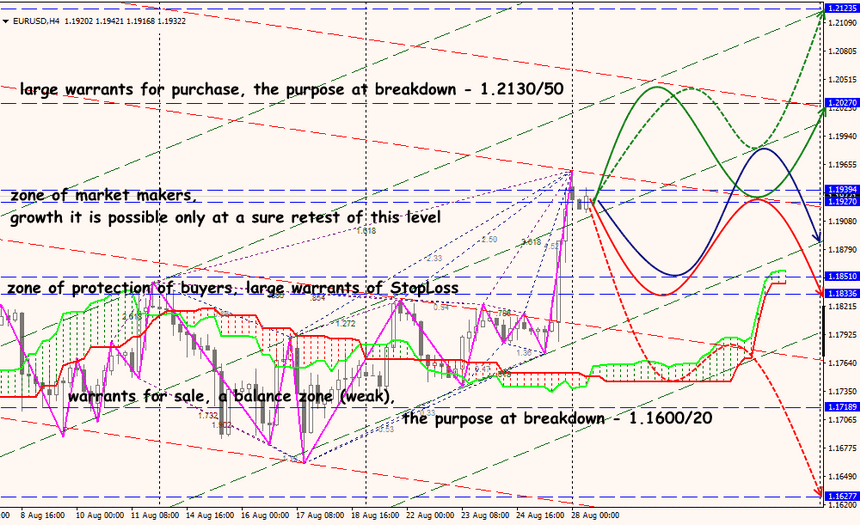 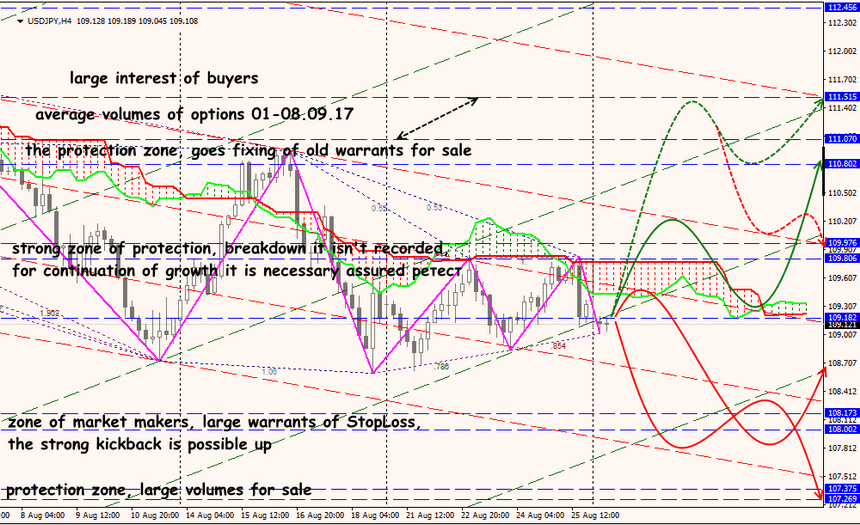