Trump speculates with the Mexican wall and North Korea.

China begins a war with neighbors; May hopes to save Brexit, and the EU − reputation.

The protocol of FRS was hawk concerning rates, but more loyal in a balance subject. The growth of dollar turned out short-term because of weak statistics especially as forecasts for GDP growth are actively adjusted on lowering, expectations of recession grow. The need for a change of strategy for the balance of FRS is supported almost unanimously, the decision on change of policy will be made at the next meetings.

It is offered to reinvest the expiring papers with a mortgage covering in the state bond to save the overall level of balance, but gradually to reduce a share of mortgage securities. Market expectations at the rates did not change − increase till a June meeting is improbable, and a rates growth of inflation above 2.0% at an acceleration of growth of salaries should be an indispensable condition for correction.

Due to a weak justification and active criticism, Donald has not decided to publish the report of the U.S. Department of Commerce on the threat of import of cars and spare parts for national security. At meeting with the chancellor of Austria Kurz Trump has said that he, by all means, will raise taxes on import of car of the EU in case trade negotiations with Europe do not yield a result, convenient for the USA. However, Trump has only 90 days to make a decision, and the European Commission plans to begin negotiations in March and to finish not earlier than October. Anyway, till April increase in duties of the USA for import of the EU is improbable.

The current week the U. S. Congress will receive the «confidential» report of Mueller on plot Trump and the Russian Federation, but such information instantly leaks out into the press so speculation on the dollar is guaranteed. The rating of the President falls, 35-days shutdown has not yielded a result, the class action of 16 states against Trump for the unreasonable imposition of the state of emergency is already in a court of California. There are only two quarters from federal to the Supreme Court where at the moment Republicans have majority therefore now Trump does not doubt the decision, necessary for himself. The decision on blockage of construction of the wall on the border with Mexico can be supported by both chambers of Parliament, but Trump's opponents, probably, will not overcome the veto yet.

Trade consultations were prolonged until the end of the current week due to the insufficient progress in regard to the theft of intellectual property and compulsory transfer of technologies. The Minister of Finance of the USA Mnuchin reported that Trump and Xi Jinping's meeting for the signing of the memorandum is planned on at the end of March, most likely, in the Mar-a-Lago. All versions of the agreement of the USA include the section regarding the obligations of maintenance of a «fair» exchange rate and lack of competitive devaluation.

The issue of a delay of increase in duties on goods from China is almost resolved – approximately for 60-90 days. Trump already actively advertises a positive in the process though the US Trade Representative Lighthizer estimates result much more modestly. And this is clear – it will be difficult for Trump to reach the agreement with the DPRK without the aid of China in perspective of an election campaign of 2020. Trump's meeting with Kim Jong-un is planned for February 27-28, but this flare show will hardly have a strong impact on the markets.

May's attempts to agree on formulations, convenient for herself with leaders of the EU at the summit in Egypt were unsuccessful. The office of the Prime Minister said that receiving necessary guarantees demands more time and decisive vote on Brexit current week from the European Union will not take place. But vote under amendments is not excluded on 27 February yet.

Results of a yesterday's meeting of May with Tusk will be voiced after similar consultations with other leaders of the EU tonight. Positions gradually approach though any guarantees can be recorded unless in the political declaration on intentions.

Negative comments from eurosceptics of the Tory and DUP party do not weaken, but May can quite get the support of the majority due to the political reshuffles in Parliament and fear of an exit without agreement accrues. A part of the Cabinet of Ministers is ready to break the May`s interdiction and to vote for Cooper-Bolesa's amendment about the postponement of the date of an exit from the EU, having provided a Premiere to decide their future through resignation. So far the probable delay of the date of an exit for no more than 60 days is discussed.

Despite fears of an exit, employment in Britain on a maximum, BOE expects on the stable growth of salaries and inflation above target level in the next 2-3 years, of course, on condition of an exit from the EU with the loyal trade agreement. Brexit situation presses to pound, but in the absence of serious information, it is necessary to switch attention to economic data of Britain and the rhetoric of members of BOE. Carney will represent the inflationary report in parliament tomorrow, PMI of the industry for February is published on Friday, Three public performances are necessary to the head of the Federal Reserve: before banking committee of the Senate, before financial committee of the lower house of the Congress and performance before media on extreme economic events and long-term problems. The speech in the Congress is of real interest – questions on a cycle of increase in rates are not excluded. It is obvious that dot forecasts of FRS will be reduced on 20 March and now Powell should answer questions, being guided by personal opinion.

Comments of figures of the ECB do not add clarity in questions of start TLTRO that makes unpredictable reaction of the markets to a meeting on 7 March. Since Thursday «week of silence» will begin in the ECB though except Draghi nobody usually adheres to it.

Positive in the conflict of the USA-China, preservation of the rating of Italy as invariable by Fitch agency are still favorable for euro, but the dynamics of the pound is more important. China publishes the PMI in the morning on Thursday and Friday.

The current week we pay attention to GDP of the USA for the 4th quarter, inflation of consumer spending, durables, ISM of the industry, reports on the sector of construction; on the Eurozone – on inflation of the prices of consumers, PMI of the industry and dynamics of the unemployment rate. Data of the USA and the Eurozone will hardly give an advantage to dollar or euro, it is logical to expect a continuation of a series of weak data in both countries. 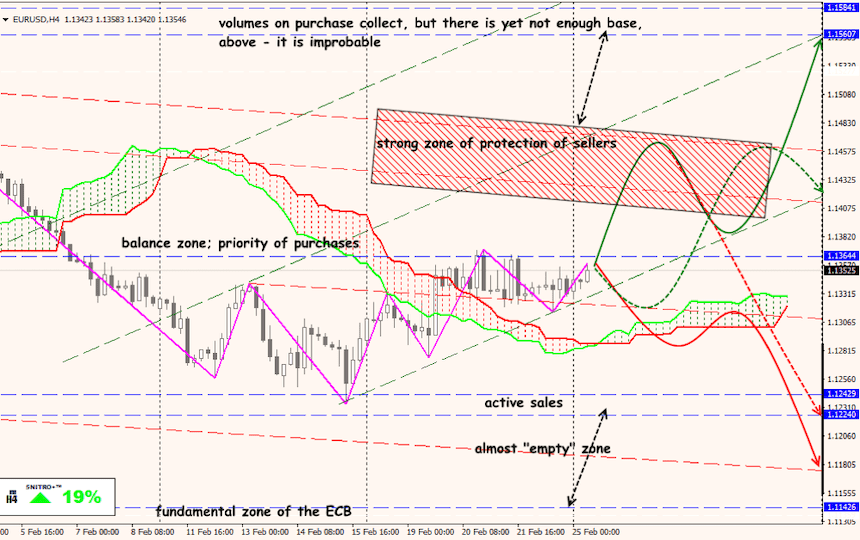 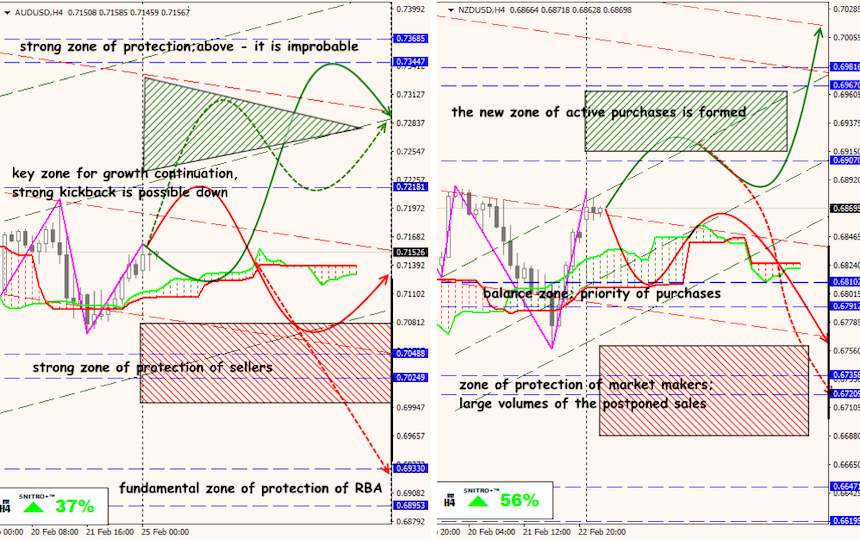