Waiting for the show in Jackson Hole

The markets painfully react to any facts when Trump is beyond reasonable control.

Technically sales of last week were provoked by a terrorist attack in Barcelona, but fundamentally – it was the next disappointment in the ability of US administration to implement the promised reforms.

FRS`s July protocols did not manage to illuminate on further plans for toughening of monetary policy and abbreviation of balance though practically all data confirmed an acceleration of economy growth. Before the publication, Trump announced about the dissolution of two advisory boards − representatives of business who were to have developed recommendations about stimulation of economy growth, as it was planned, quitted these working groups in protest at Trump's response to events in Charlottesville.

The reaction of the market can be considered not absolutely correct especially as rumors about Gary Coen's resignation have appeared, on the majority of forecasts – future head of the Federal Reserve. The White House tried to dissuade masses, but it is already clear that the world waits for the next tactical defeat of the scandalous president. In particular, because of fall of the main security assets, there has passed the wave of hedging and/or repatriation of currency risks in yen, and stronger, than on threats of the conflict with DPRK. Data of last week have shown that the economy of Japan has grown in the second quarter the largest rates in two years, consumer and corporate expenses have grown, and, at last, the long-awaited growth of domestic demand was shown, though the growth of salary and inflation remain suppressed.

A consensus of all members of FRS was formed only on terms of the beginning of the reduction of balance – the statement for it is expected on September 20 in the absence of any political or economic force majeure. Before making a decision on the increase in rates at a December meeting, FRS will be obligatory estimate reaction of the financial markets to the beginning of the reduction of balance.

It is supposed that dismissal of Steve Bannon, Trump`s main strategic manager, has to put the end in the history with Charlottesville though the conservative block of Republicans has opposed sharply this resignation. The Mueller's investigation story is far from the end and continues to press a negative on the markets, besides, against the background of conducting joint military exercises USA − South Korea during the period from August 21 to August 31 a risk of a new start of rockets by Pyongyang remains.

The main idea of meetings on August 24-26 − dynamic development of global economy – allows performances practically on any subject. It is already known that an opening statement Yellen is expected in 16.00 CET, and Draghi − in 21.00 CET. At the moment fears (of FRS concerning delay of inflation and of ECB concerning the further strengthening of euro) signal about the extreme care of regulators.

We should expect optimistical FRS`s rhetoric, the chairman always preferred to rely on labor market growth, but not on dynamics of inflation. Positive data of inquiries of customers and vendors give to madam Yellen the grounds for optimism concerning perspectives of economy growth of the USA that automatically leads to the continuation of normalization of an FRS`s policy.

The protocol of the ECB significantly impaired a view for euro. Growth more than for 12% this year creates a high probability of problems with the export of the European commodities in the 3rd quarter and if the movement does not stop up, then hardly the ECB will take any decisive steps concerning normalization of monetary policy in September. Draghi plans to make a speech at first on August 23 in 9.00 CET at a meeting of Nobel laureates, and then − in Jackson Hole. Both performances will remind dances with wolves: Germany (especially before parliamentary elections!) supports immediate extinction euroQE and increase in rates, and the USA requires high euro exchange rate for the entering into more favorable new trade agreement between America and the EU. Nevertheless, the principal shock on the market it is worth waiting for in Germany − any hint that the current growth of euro threatens the achievement of the goals of the ECB, will lead to the vertical decline of EUR/USD, but not the fact that Draghi will decide on the similar announcement.

Also, we will note the following:

The current week we pay attention to indexes from ZEW − the eurozone and Germany, the PMI index − the eurozone and the USA, CPI of Japan, and separately on the USA: sales of new buildings, data on goods of long-term use, index of consumer moods. We listen carefully all near the market information – reasons for speculation enough. 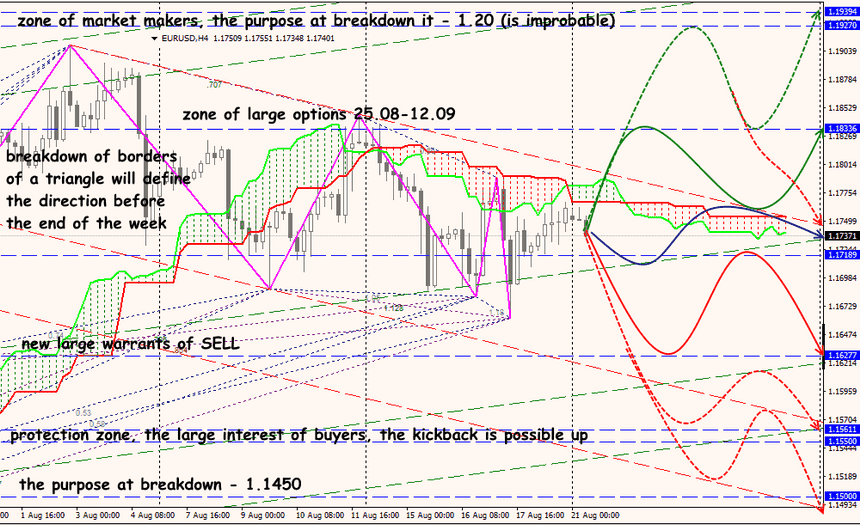 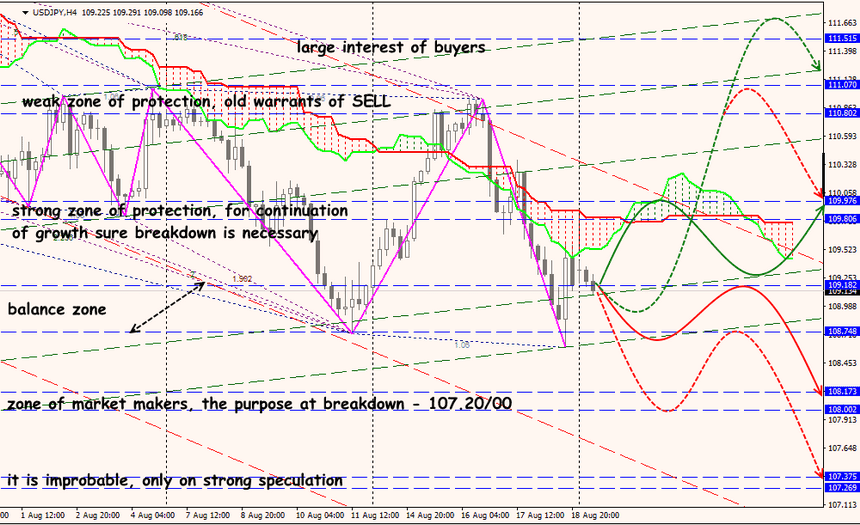