Under the sign of Brexit: the form governs contents

The Fed slows down; China is trying to bargain; OPEC raises US export prices. America continues to lose money.

Trump is not ready to admit defeat. But we are waiting for the signal for a new financial catastrophe from London. The market quietly perceived the protocol of FRS, Powell's performance on Thursday was more balanced, than a week before, market expectations on increase in rates slightly grew. Considering the result of trade negotiations between the USA and China, we wait from FRS in March either a signal of saving of the mode of a pause in the second quarter or the instruction accurate for correction of a rate in May-June. In a week «the silence period» before a meeting of FRS will begin on 30 January, strong fluctuations on performances of members of the committee are improbable in the nearest future if only Jay does not try to unroll the priorities again.

The bill NOOPEC has no chances until U.S. Congress is busy with opposition to Trump. The wall on the Mexican border can «bury» the president ahead of schedule − the current shutdown updated records on duration. Democrats consider that now the declaration of emergency by hysterical Trump can be the best option as it will allow resuming work of the government, and the president's powers on such actions can be disproved easily in court.

Formally political collapse poorly influences the dollar exchange rate, actually, financing of 3/4 U.S. Governments is legislatively provided until the end of the financial year. A real threat is posed by a problem of the next increase in a threshold of a national debt of the USA. Fitch declared possible rating downgrade of the USA in case the level of national debt is not increased till March 1. The termination of shutdown can lead to a thorn on the growth of the dollar, but then the attention will switch to the possible announcement of an impeachment.

The last (according to the procedure) vote of parliament of Britain on Brexit have to be tomorrow. The main problem of May consists of the number of votes of the ruling party. Analysts consider that if the number of votes of the Tory «against the transaction» is less than 100 – there is a chance to adopt the agreement on a repeated vote if more than 100 – there are no chances of adoption of the agreement.

The EU promised written assurances about the temporality of support of open border with Ireland with Tusk and Juncker's visas today, but conservatives demand legally certified guarantees which the EU does not intend to provide. The reaction of deputies of Britain after obtaining the document of the EU will help to estimate tomorrow's vote. If a vote failure, the following control point is 21 January.

The option of tomorrow's negative vote is most probable, the markets will volatile before submission of the alternative plan of an exit on 21 January. The following is necessary for the termination of panic and stabilization of a rate of the pound:

The current government of Britain is inclined to consider the last option for blackmail of the EU but is hardly ready to consider it seriously.

The week opens by information on the disintegration of the ruling coalition of Greece that in general, is negative for the euro. For the economy of Greece, is not of particular importance, whether parliamentary elections will take place in October (as it is planned) or a few months earlier. Tsipras's party is the largest group of eurosceptics in the region, and according to the insider, Tsipras has enough voices for receiving a vote of confidence on a vote on Wednesday.

In addition to the weak dollar, euro last week got support from offshore yuan. The People's Republic of China and the USA continued trade negotiations in Beijing, having pushed the growth of the price of oil and in general having improved moods of world investors. Draghi will act in European Parliament tomorrow, his rhetorician will help to understand the direction of a discussion at a meeting of the ECB on 25 January. If Mario focuses attention on the growth of the labor market and salaries, will express confidence in the achievement of the goal on inflation than euro will get support. Any doubts on inflation will provide active falling to euro.

In addition to the policy, the current week we consider the following data:

Irrespective of the American news, any information on progress in trade negotiations between the US and China will well affect Asian assets. The British statistics can actively influence the movement of pound on the subject Brexit. We watch liquidity; we catch any information from officials of Britain and the EU; we wait for thorns on the pound in both parties (euro will try to keep step with pound). 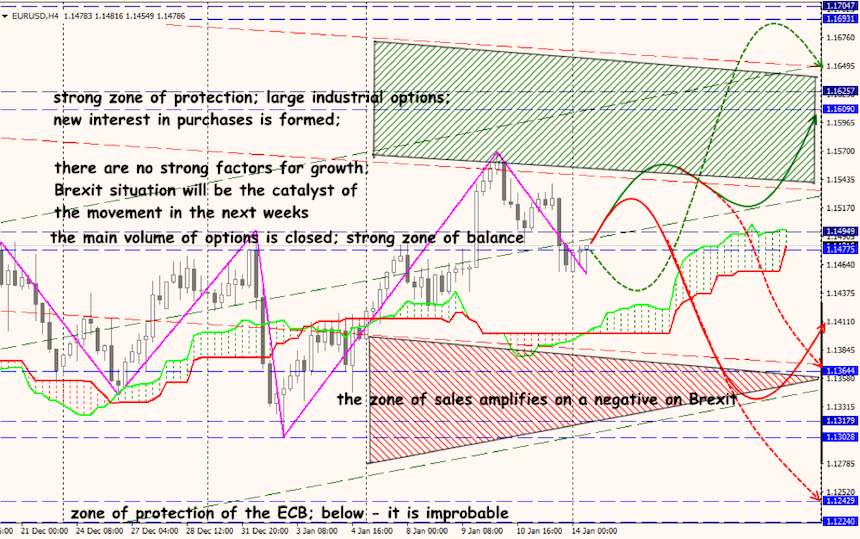 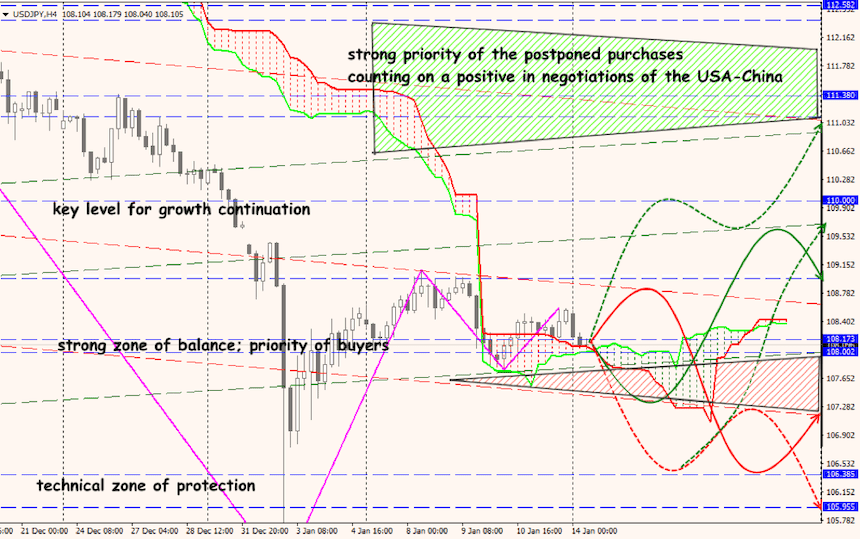