Trump saves the world from himself: if not dollar, then who?

The leaving summer hasn't pleased the markets by the flat, and a return of large players to a game will only add dynamics. We will determinewith dislocation of the main problems.

The publication of the protocol of FRS on Wednesday won't add a positive to the dollar though the accompanying statement of 1 August was optimistic. Last meeting has taken place after the publication of excellent GDP of the USA for the 2nd quarter, and the crisis in developing markets hasn't reached a critical stage then yet, − FRS had no reasons for concerns about the growth of the economy. The market expects on two more increases in a rate of FRS in the current year, but any hint on a discussion on this subject will seed new doubts that will badly be reflected in dollar. Strong reaction to the publication is improbable, all positive news is already put in quotations if FRS continues practice of uneven increase in rates – the dollar will appear under the descending pressure.

On August 24 at 16.00 CET Powell will for the first time make the speech as the head of the Federal Reserve, the full schedule of performances of guests will be published on Thursday. This occasion was traditionally used for messages about changes in policy of the Federal Reserve System: in due time in Jakson Hole Bernanke opened the QE program, and Yellen finished it. The Fed`spolicyat the current stage is very rigid, whether Powell can dare to be honest after the president publicly opposed FRS? Anyway – we listen carefully.

Trump twitter persistently doesn't notice readiness of Turkey for rapprochement with Iran, China and Russia that for the USA extremely negatively. The White House is going to impose in November sanctions in relation to the selling the Iranian oil, but Ankara has already stated that it will continue to buy the Iranian oil and gas.

The other day Trump has praised himself for the fact that the American steelmakers at last will get profit, but at the same time has held back what losses are already incurred by farmers of the USA. Perhaps, understanding of this fact also forces the USA to look for a compromise with Chinese. The policy of blackmail has practically failed: China has introduced mirror duties on the American agricultural production, just mainly from states where voters have supported Trump on elections.

Information on a new round of negotiations between the USA and China has a little cooled the markets though initial contacts will take place on 22-23 August at a low level: their task – to prepare the road map for Trump and Xi Jinping's meeting in November. Trump wants that strengthening of yuan exchange rate by the Central Bank of China became the first step for success in negotiations on trade. Growth of yuan exchange rate against dollar will become the first confirmation of progress in negotiations. Judging by the statement of the negotiator from the USA Lighthizer, the break in negotiations on NAFTA is also possible in the nearest future. In this case the growth of appetite to risk in any assets with dollar can be expected.

Sanctions of the USA have led to aggravation of crisis and lowering of the credit rating, according to the insider the government of Turkey is ready to exempt the pastor subject to the receiving from the USA of reciprocal concessions, but Trump hasn't squeezed out of a situation all public relations, necessary for him, yet. However, not all problems of Turkey are connected with sanctions of the USA, the economic policy of Erdogan reminds the bad copy of «Asian crisis» of the 1997th and Russian crisis of August, 1998.

The Central Bank of Turkey was succeeded to strengthen lira exchange rate by means of granting the credits in dollars, but this temporary improvement. Qatar is ready to invest $15 billion in the financial sector of Turkey, but it isn't enough for a situation change. Erdogan has carried out telephone conversation with Merkel,as a result of which was the agreement on a meeting of the Ministries of Finance is reachedthough it is obvious that now the ECB can recommend only increase in rates and return of regulatory functions to the Central Bank. Of course, it is a pity for the American pastor, but it is already clear that east crisis can't be solved without participation of the IMF and restructuring of a national debt.

Statistical data left rather positive, but all British assets are under steady pressure under fear to be left without transaction after Brexit. The insider about the preparing offer of the EU during the informal summit on 20 September hasn't received confirmation yet, negotiations are continuing. If the progress the pound can fix a bottom and nevertheless to execute technical kickback up on 1-2 figures, noncritical for itself.

The Italian assets under rigid pressure. The bridge in Genoa has buried not only people, but 30% of investments of investors in the stocks ofAtlantiaSpA. A revoke of the license for construction of the paid road by the government has led to reduction of capitalization of the Benetton family`scompany for €5 billion.

The European Commission has agreed that the infrastructure project is necessary for Italy even if it will lead to violation of the budgetary rules of the EU, but it hasn't led to the resolute growth of euro as the ECB will hardly approve all planned expenses.

The OPEC abstains from comments of a situation long ago, but the market puts in the price potential interruptions of deliveries from Iran, including deterioration in global economic prospects and also growth of dollar. One of drivers which can support staple prices in the medium term is the season of hurricanes in the USA which, as a rule, begins in the second half of August and lasts to the middle of September. Besides, the global energy and logistic companies are very badly prepared for new environmental standards of International Maritime Organization (IMO). Producers also plan to take costs of technical re-equipment of tankers from the market.

Current week durables, reports of the real estatesphere, PMI of the industry and services will become the main data of the USA; on the Eurozone − PMI of the industry and services, GDP of Germany. The protocol of the ECB we wait at13.30 CET Thursday, there are small chances of display of a discussion in the ECB on rates, if that isn't found – euro can appear under the descending pressure. We prepare for very hot fall. 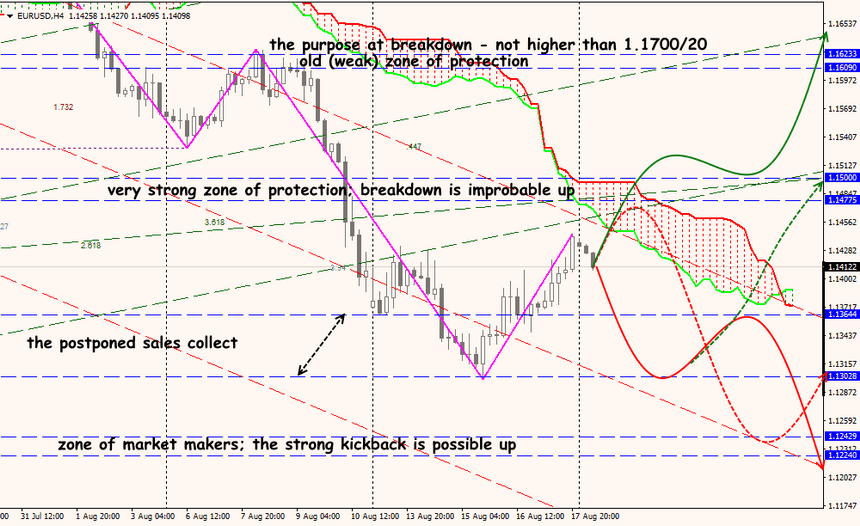 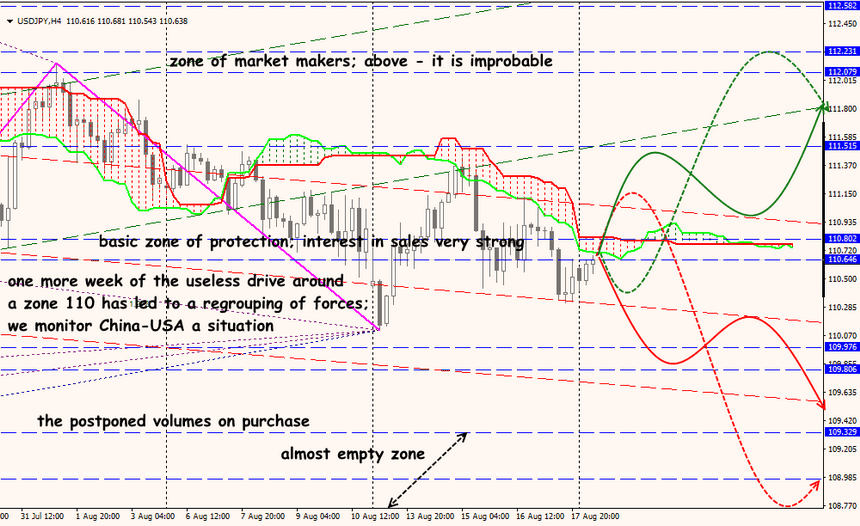