China strikes back; new sanctions against Russia; diplomatic defeat of the EU; an accident of cryptocurrencies.

The collapse in the market of oil has interrupted the growth of the S&P 500 index. The rally of the dollar to Turkish lira ricochets on the adjacent markets. Trade expansion of the USA broadens the base.

Today's markets had to make the choice between war and a shame. Europe has chosen a shame (Juncker's visit has confirmed the actual capitulation) – and all the same, has received a war, and China is ready to engage also without additional humiliations.

Yes, Beijing can't answer the USA with adequate volumes of «mirror» duties, but!:

The intermediate result of the fight will be visible at the beginning of September.

The American-Chinese crisis so actively develops that the markets already began to doubt two following increases in a rate of FRS in the current year. However, the judgment of FRS in relation to the current situation can be recognized not earlier than the publication of the protocol (on August 22) or during an economic symposium in Jackson Hole (23-25).

The first round of trade negotiations USA−Japan did not bring result though Abe was succeeded to delay an increase in duties on import of a car for negotiations. Trump unwillingly supported achievement of arrangements on NAFTA between the USA and Mexico, but again threatened Canada with an increase in duties if Trudeau does not make concessions. The sharp decline of the Canadian dollar was caused by a sale of assets of Canada with Saudi Arabia so Trump's threats are still ignored.

On Friday the Turkish lira has fallen to record minima because of a situation with the American pastor detained in Turkey. Against the background of Trump's order on the increase more than twice in tariffs for the Turkish metals, the conflict has quickly expatiated with developing to the advanced markets. An aggressive tone and illogical behavior of the president Erdogan is added the negative on the Turkish currency (and respectively, euro). The Turkish banks actively lose stocks of the reserve capital, and appeals to business (to sell currency assets) and to the population − to transfer the accumulation in dollar and gold to national currency look inappropriate irony.

The sharp decline of euro is connected not only with a breakdown of a strong option barrier, but also with prevention of the ECB on risks because of an accident with Turkish lira − the Spanish, French, Italian banks remain basic creditors of the large Turkish companies. Bank problems can become the reason of continuation of buying up of assets within euroQE and chances of pigeon rhetoric Drags during the September meeting sharply increase.

The saturated week is necessary to us:

The eurozone will read the ZEW index of Germany, GDP for the 2nd quarter, inflation of the prices of consumers and statistics of industrial production – expectations, in general, are pessimistic, but even the smallest positive will become the correction reason above 1.15. Statements of the ECB on Turkey and new threats for banks of the Eurozone aren't excluded. 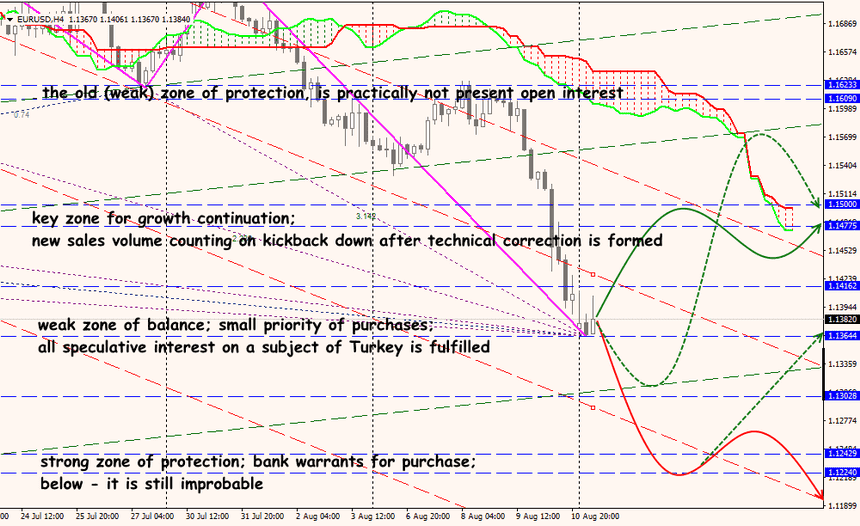 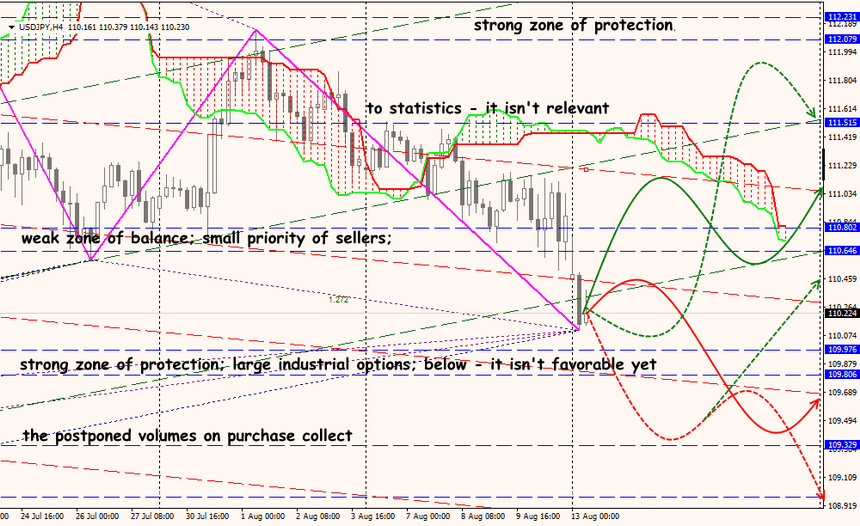