Trump many-faced or mistakes of Bismarck are not relevant yet

The ECB did not begin to adjust policy, and at the last meeting it was limited to assessment of an economic situation and statements for readiness to take measures if necessary. Specific measures of regulation and a detail of the new TLTROs auctions were not discussed at this stage. It is improbable that Draghi will manage to force accepting the multilevel system of deposit rates before his resignation in October 2019, but with his persistence everything is possible within this system. So far all decisions are postponed until June. The balance of risks on euro descending.

Thanks to Macron's activity, the EU extended Article 50 regarding the date of Brexit till 31 October with an option of an exit of Britain from the EU before the term in the case of the ratification of the agreement. Britain will not be able to leave the EU without agreement regardless of whether there will be May on a post of the Prime Minister or not.

The British Parliament with a feeling of discharged duty went on Easter holiday, the next debate is expected not earlier than the beginning of May.

Negotiations with labourists continue, but to result still far. The delay gives to opposition time to hold elections, to dismiss May or to arrange a repeated referendum. There is a chance that the Parliament will try to avoid participation in elections to European Parliament and will be more compliant during the new vote, but most likely, the horror of Brexit will come to the end only on Halloween.

The current week it is worth paying attention to the report on the labor market, data on inflation growth and the report on retails.

The protocol of the last meeting of FRS did not impress the markets. Anyway, revaluation of a situation is possible only in case of the strong growth of salaries and inflation and before the third quarter is improbable.

Internal personnel scandals do not add authority to the Federal Reserve System. Trump, most likely, was mistaken with candidates for the Fed's Board of Governors. The problem is that candidates will have to refuse the political views, and the active loyalty to the President in this organization is considered a sign of nonprofessionalism.

Alas, historical negative experience of warfare on many fronts at the same time does not stop the U.S. President yet. Few front reports:

Situation passes into «an eye for an eye» stage and the EU prepares retaliation. The list of goods from the USA agreed for the total amount of $12 billion concerning which it is offered to raise tariffs is. It is the first attempt of compensation of potential losses of the European business because of the tax benefits of Boeing corporation from the U.S. Government.

In the EU after the months-long disputes agreed about the beginning of negotiations with the USA on simplification of terms of trade − on April 15 the European Commissioner Malmstrom has to receive the respective mandate. In case of realization of the threat of Trump about the increase in duties of the USA for import of cars from the EU, we wait for fast falling for euro regardless of the quality of economic data. Fight only begins, we wait for an outcome in the summer after the decision of the WTO.

Euro showed a small activity against the background of fears of great demand in connection with plans of Mitsubishi UFJ Financial Group to acquire the German multi-billion business on the financing of aircraft DZ Bank. The transaction was announced on 1 March, and MUFG stated that it has to be complete in June. The overall technical picture for the euro does not change.

Negotiations continue, the representative of the Ministry of Foreign Affairs of China has said significant progress that gives to the markets small positive. Even the Ministry of Finance of the USA Mnuchin has announced that the procedure of guarantees of execution of conditions of the commercial agreement was agreed. However, despite all promises to increase the purchase of the American goods, reports show that the total amount of trade with the USA in the first quarter (in yuans) was actually reduced by 11%. Trump is busy now, but when he understands this information the anger of the President during the next several days is guaranteed.

Representatives of the authorities of Japan and the USA prepare meeting in Washington next week, the Prime Minister of Japan Abe desperately tries to avoid new tariffs for export of the Japanese cars while Trump persistently breaks on the Japanese agrarian market and demands to reduce the trade deficit with Japan. Serious fight of the American business with Japanese diplomacy will begin after signing of the agreement with Beijing.

Trade week is reduced, on Thursday at most the exchanges of Europe and the USA the reduced session, in Good Friday is a day off. Performances of financial figures are not planned, fresh insiders from the ECB and FRS are improbable.

Retails, the production index of FRB of Philadelphia, reports on the sector of construction and «the Beige Book» will be basic data regarding the USA. On the Eurozone, we pay attention to the ZEW index of Germany, inflation of the prices of consumers for March, PMI of the industry and services of the countries of the Eurozone for April. China will publish statistics block led by GDP on Wednesday. Large players will begin to lock in profits of week on closing of Wednesday and in the morning on Thursday, be careful with short-term transactions. 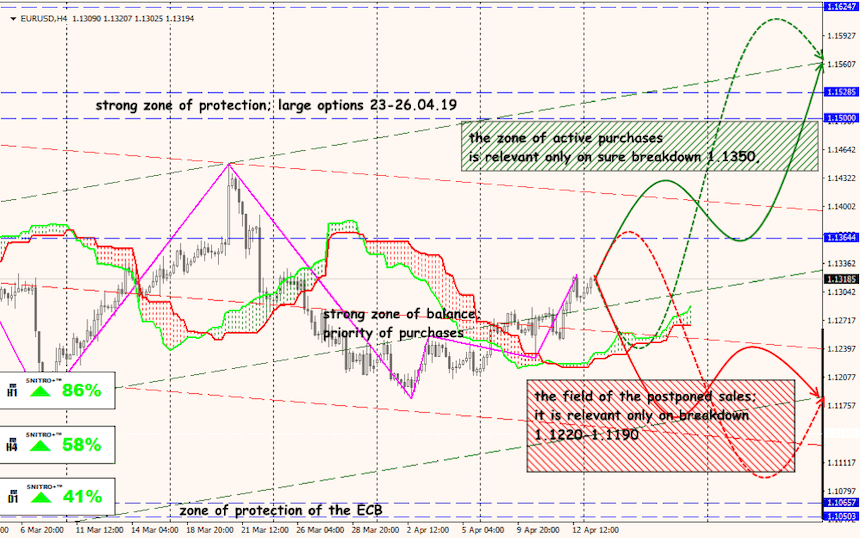 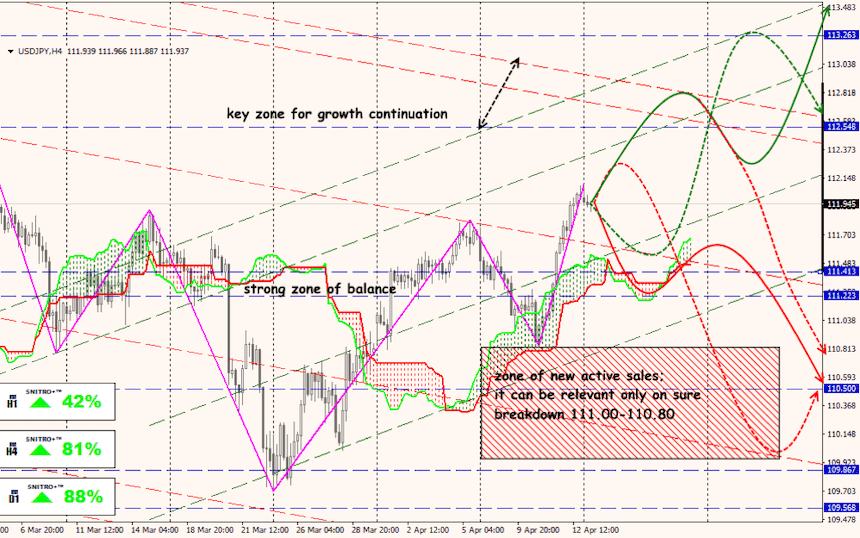