FRS was traditionally boring; Italy prepares for penalties; intermediate elections in the USA «have suspended» the Congress.

The week has opened on a negative on Brexit; Trump changes the prosecutor, and May loses ministers.

Republicans have strengthened the influence in the Senate of the USA (only Romney remained from obvious opponents of Trump), but the loss of the lower house will become a huge problem for Trump and a negative for the dollar. Now acceptance of fiscal incentives by the Congress becomes complicated, Democrats can support the infrastructure project, but in exchange demand the mass of concessions (immigration, health care) that will lead to the sharp growth of a national debt.

But the main thing − a victory of Democrats is guaranteed will accelerate investigations for Trump, from disclosure of tax declarations to communications with the Russian Federation. The humble tone of Donald during the press conference after elections has managed to deceive nobody. Badly constrained Trump's rage was shown later − in the dismissal of the Attorney-General of the USA Jeff Sessions and his replacement by more loyal Matt Whitaker. The new general has powers for Mueller's dismissal and, at least, for suspension and restriction of the budget of his investigation. Democrats are indignant, but can't influence this appointment.

The new structure of the Congress will begin work since January − it is possible to finish the year quietly and the dollar will be under the descending pressure under an internal negative.

According to forecasts of European Commission, in 2020 Italy will exceed the budgetary limit, and expenses of the government, including costs for service of a national debt and non-performance of revenues of the budget, will be the main problem. Forecasts of the IMF are even more pessimistic. The government of Italy has to provide the next «new» draft budget till November 13, otherwise, for the first time, the EU can apply penalties which mechanism is still unclear. As a preventive measure, Italy can be demanded to transfer 0,2% of GDP in the Stabilization Fund of the EU ESM and to establish deadlines on taking measures for reduction of a national debt. The European Commission + ECB+IMF controlling group can be sent to to the country for the budgetary monitoring.

The decision will be made till November 21 on the basis of forecasts of European Commission, but the fear of sanctions is obviously exaggerated. State treasury bills of Italy are in all banks of the countries of the Eurozone, repetition of the debt crisis of 2010-2012 is necessary to nobody especially as by results of elections in May 2019 more populist structure of European Parliament is expected which can «democratize» the budgetary rules of the EU. While there are no reasons for the disintegration of the coalition government and threat of an exit of Italy from the EU – euro depreciation on this subject will be temporary.

Insiders from London are contradictory, but is already clear that Mayxit hasn't enough chances: the EU has rejected the key offer of the Prime Minister. Rumors about the confidential agreement as a result of which all Great Britain will remain in the Customs union of the EU even after Brexit haven't come true yet. As «independent sources» report, in the new draft agreement, the concession of the EU is a recognition of Britain`s right to exercise control of goods «in the market», that is not on the border, and directly within production. Preservation of Britain in the Customs union of the EU will allow avoiding creation of a border between Northern Ireland and the Republic of Ireland, but this issue is still not resolved.

After the resignation of the Minister of Transport on Friday, four more ministers of the Cabinet of Ministers of Britain are ready to resign. The Prime Minister denies information on the preparation of early elections. Even if today Theresa will convince the Cabinet of Ministers to issue her the mandate on the signing of the agreement, then the parliament doesn't ratify this agreement – May has no enough voices at the moment. A debate promises to be aggressive.

November is a deadline when still possible to consider the option of a smooth exit from the EU in March. Any transfer of the final decision will force the markets to stake on the stringent scenario of Brexit − in that case the next accident is guaranteed to pound. Today Barnier reports to the Council of Europe on the current situation in negotiations, perhaps, we will hear something concrete. Raab and Barnier's meeting with the publication of the agreement is planned for tomorrow; if everything passes according to the plan, then the signing of the agreement is possible at the summit of leaders of the EU on November 23-25.

About the rest of the news briefly:

Inflation of the prices of consumers and retails will be a main data about the USA at current week; on the Eurozone − the ZEW index of Germany, inflation of the prices of consumers and GDP of the Eurozone for the 3rd quarter. We pay attention to statistics of the labor market of Great Britain on Tuesday and data on inflation of consumer prices on Wednesday. Fans of Asian assets should trace to the GDP dynamics of Japan for the 3rd quarter and the block of data of China.

Powell will make a speech on 14 November in 17.00CET at a conference of FRB of Dallas, and in 17.30CET will be present at a meeting which is devoted to the elimination of damage caused by the hurricane Harvey and a problem of low wages in Houston. In comments, we look for opinions on dynamics of salaries and overheating of the labor market. Draghi will make a speech in 09.30CET on Friday at the summit in Frankfurt, but the ECB can't surprise yet with anything new the markets. 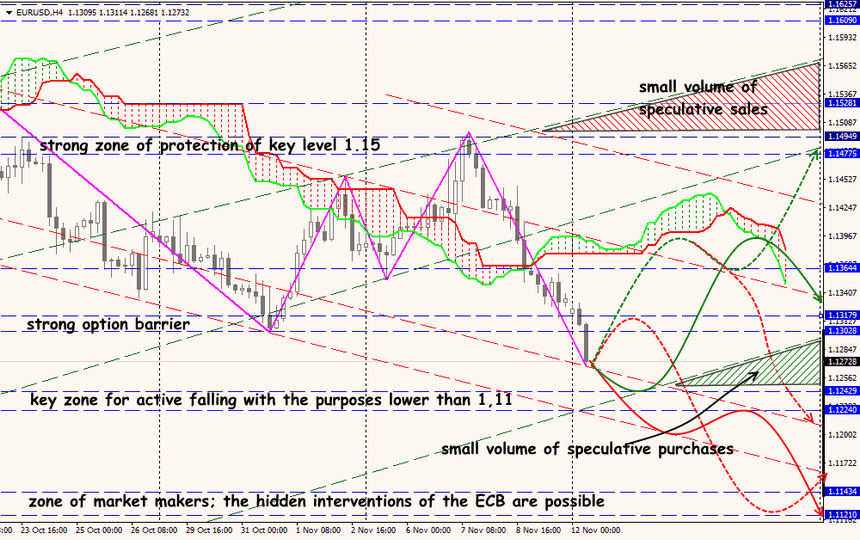 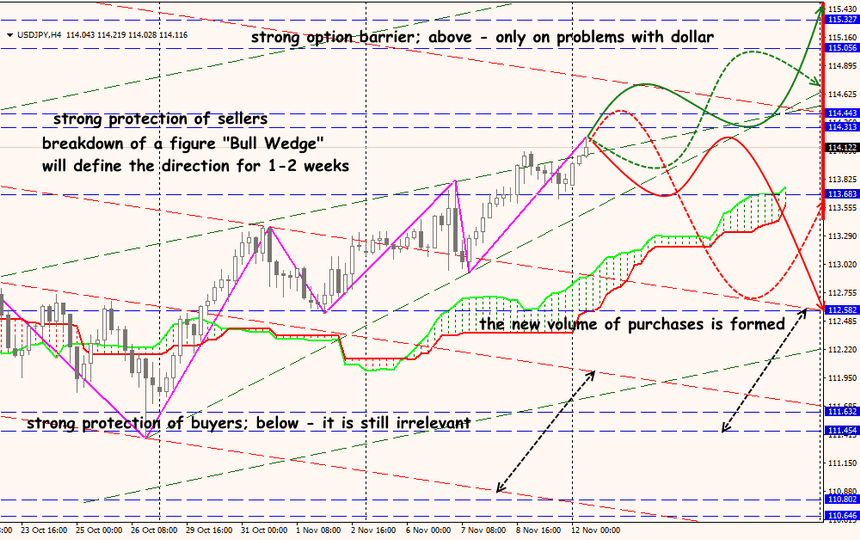