In market focus – OPEC, ECB, Macron's visit to the USA, trade wars and the decision on the nuclear agreement with Iran.

The settlement agreement with the EU and friendship with Japan sacrifices China.

The next insider from the ECB looks quite logical – Draghi has dared to break «silence regime» to test market moods before a meeting on 26 April. It is obvious that irrespective of growth of economy and inflation, the ECB is going to close up the program of stimulation at the end of the year, but the current pause is necessary to be convinced − delay of the economy of the EU in 1 quarter was temporary. It is also necessary to estimate the result of negotiations between the EU and the USA concerning the increase in duties on steel and aluminum import, and therefore you shouldn't wait for the first steps on correction of euroQE before July.

The meeting of the ECB on Thursday will be ordinary, but the current situation is perfect for Draghi's manipulations: the economy is slowed down – if wished it is possible to drop euro easily – but it is so easy to lose control over the market so reserved rhetoric of the head of the ECB is most probable. Direct answers to questions of future policy of the ECB is unlikely. Today's publication PMI of the Eurozone will surely affect the tone of comments, on a negative, euro can quite fall to a zone 1.2250 which repeatedly was a support.

Trump which declares a priority of direct trade agreements over global arrangements will have a week of negotiations, uncomfortable for him. EU countries intend to offer a reduction of duties for import of automobile products from the USA. Macron with an official visit to Washington carries not only an oak sapling as a gift to the U.S. President, but also the European hope for Trump's concessions concerning the nuclear agreement on Iran and liberation of the EU from «metal» duties. Especially as on 27 April also the meeting with Merkel is necessary to Trump so the chance of arrangements, positive for Europe, considerably increases.

The failure reports on inflation and retails seemed not enough to pound, so still Carney the statements has provided to the British to currency active falling. Investors should reconcile to two facts:

The Parliament has voted for the amendment ordering to the government of Britain to consider the possibility of preservation of Britain in the Customs union with the EU (such decision is estimated as a long-term positive for pound). It contradicts May's purposes who think an exit of Britain from the Customs union from the EU the main task, that will allow concluding new trade agreements. A resignation of the government isn't discussed yet, but it can become relevant in the nearest future. The solution on the border with Ireland is at the next deadlock.

There are no important economic data of China current week. The Ministry of Finance of the USA Mnuchin has said a visit to China for negotiations on trade relations, there is no accurate date yet, but at new information, it is worth waiting for the growth of risk concerning dollar. China made attempts to find support from leaders of the EU in a trade dispute with the USA, but, apparently, it was unsuccessful: EU is ready to sacrifice China for the sake of maintaining own trade privileges.

The total press conference of Trump and Prime Minister Abe has been generally devoted to a situation with North Korea: Japan gets the support of the USA. However, the economic price of this decision isn't clear yet though (from the point of view of the USA) hard work over the reduction of trade deficiency with Japan is continued. Trump has again accused media of incorrect interpretation of his position concerning the Trans-Pacific Partnership (TPP) – he just tries to organize for himself more favorable conditions within this agreement, for the current U.S. President − it is the usual «business course».

The current week, additionally to the ECB, offers to the markets two more meetings of the Central Banks: on Thursday - Bank of Sweden, on Friday – the Bank of Japan. Asians hold the first meeting after data on the highest rate of inflation, the accompanying statement should be studied attentively. GDP in 1 quarter, reports on the real estate market and a research of moods of consumers will be the main data on the USA; on the Eurozone, we pay attention to the IFO index of Germany. 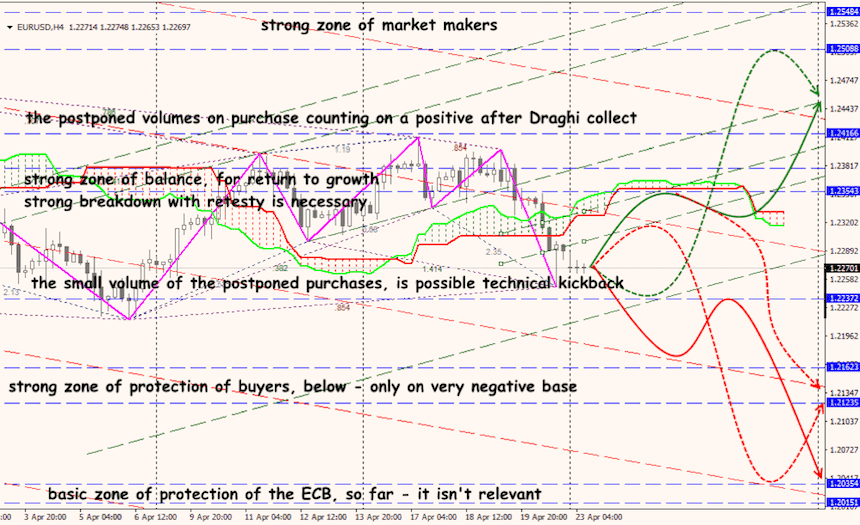 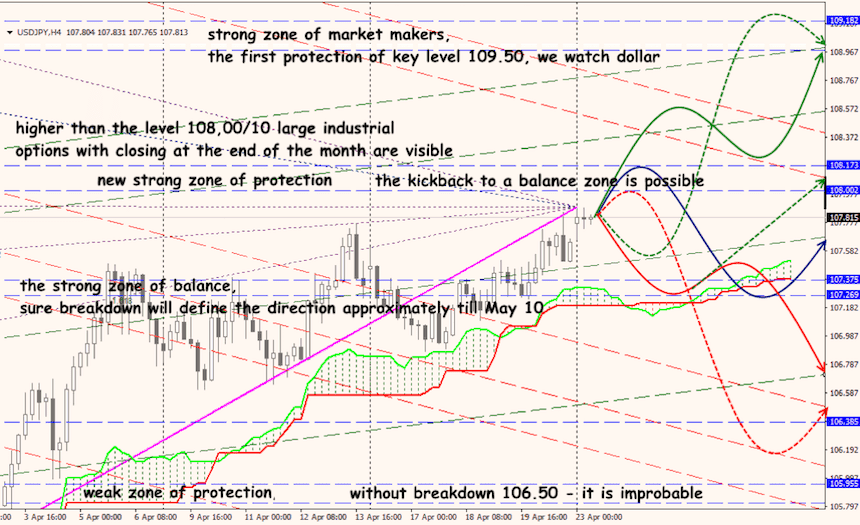