Truces not in a trend: we wait for results of local wars

Tolerant the OPEC, confidently strong NFP and aggressive Trump did not manage to calm the markets. The main objectives of year remained open.

… was almost ideal, but investors preferred flight in state treasury bills of the USA and a decline in yield of papers promoted to the lack of demand for the dollar. Now it should be traced how this report will be treated by FRS – it is clear that with the current growth of salaries there is no sense to deny the existence of risks of overheating of the labor market.

The publication in WSJ reports that members of FRS discuss option about a change of strategy regarding an increase in rates and at a meeting on 19 December the Federal Reserve can decide that rates need to be raised depending on data, and more than once in a quarter. If statistics of the USA in the next one and half weeks is strong, then FRS will have no bases for revision of forecasts for the decrease and sharp growth is provided to the dollar.

… again ignored the weak economic data and remained in a side channel waiting for events of the current week. The end of euroQE is expected at a meeting of the ECB on 13 December. Spain and Italy canceled auctions for placement of state treasury bills this day for fears of volatility, but the reaction to an event is expected weak. Any growth of the euro based on the policy of the ECB will be short-term; you should not wait for special optimism from Mario's rhetoric. The insider predicts statements about the decrease in the balance of risks and forecasts for GDP growth of the Eurozone, hints on increase in a rate are improbable. The ECB already published a new key of the capital, and it is most negative for Italy.

The summit of leaders of the EU on 14 December is devoted to reforms of the Eurozone which are already estimated by analysts as «mythical», but it is one more chance to discuss the decision on Brexit, the budget of Italy and offers of the USA on the trade agreement. The reaction of euro for official results is predicted by weak.

… gradually loses market attention, but continues to play for time with adjustment of the budget; the next deadline – before the EU summit on 14 December, but it is possible that date will be postponed again. Conte's government expects on the reduction of requirements after the summit as many countries of the union are not ready to increase contributions to the budget of the EU at the violation of the budgetary rules. The decrease in the budget deficit to 2.0% solves the current problems of euro, but if the government of Italy continues to rest, the European Commission will demand pledge that will lead to the strong, though short-term, decrease.

Trump changes the head of the administration again, but it is still a little persons interested. The Congress prolonged financing of the government till December 21. Tomorrow in 17.30CET Trump will meet leaders of Democrats of the Congress Pelosi and Schumer for discussion of financing of work of the government in the long term. If agree − dollar will receive an incentive to growth; if Trump presses the requirement of full financing of a wall on the border with Mexico, then it will hardly find support from Democrats.

Players on pound persistently cling to range in 150 points waiting for the decision of parliament on the draft of the agreement on Brexit. Despite the risk of a delay of the vote, May insists on hearings on 11 December, allowing three options: the current project, an exit without transaction or full refusal of Brexit unilaterally (such chance confirmed the European Court of Justice). The verdict regarding the transaction will define also May's destiny as the acting Prime Minister. Prospects on success are minimum, there are not enough voices for May's draft, and the EU will not make further concessions. Politically now an exit without agreement makes sense, it will reduce tension and will hold pound at least at the current levels. However, Therese anyway will have to resign if not now, then at the beginning of the next year. At refusal of May's agreement, there is an option of the agreement according to the scheme «EU + Norway» on much worst conditions – it is enough voices for its ratification. The repeated referendum is improbable, but the market, after all, considers such an opportunity.

The party of eurosceptics UKIP brought several thousands of people to a meeting in London in support of Brexit. Today we pay attention to data of GDP and tomorrow – to the report on the labor market.

The summit came to the end with the distressful agreement on the decrease in oil production by 1.2 million bars/day since 1 January 2019 from levels of October for the term of 6 months. Iran, Libya and Venezuela are not included in the program of reduction. Correction of parameters of the agreement is possible in April.

Analysts allocate a number of shortcomings of the new pact:

Conclusion: there are not enough reasons for the sharp increase in prices for basic grades within 1-2 months.

A truce is called only on paper and the situation with Huawei does not give chance to trust Trump's twitter positive. The finance director of the Chinese company Huawei, she is a daughter of the founder of the company, Sabrina Meng Vandzhou, is arrested at the airport of Vancouver on suspicion of fraud. Trump does not hide the personal hostility to Huawei, this year the USA already forced the allies to refuse to Huawei the rights for modernization of mobile networks 5G. Moreover, Trump, having supper with the Chinese leader on a G20 summit, precisely knew about the preparing arrest.

Now the rigidity of Beijing in a subject of a business icon of technological China can become the reason that in the next 90 days no agreements will be reached, and the next round of the American «penal tariffs» will be realized. The block of statistics of China will be published on Friday.

Powell's performance in the Congress was postponed because of Bush Sr. memory, and the silence period before a meeting on 19 December now began, so hardly we will hear the head of the Federal Reserve up to this point. Draghi will participate at the summit of leaders of the EU, but the performance is not planned.

Brexit and the decision of European Commission on the budget of Italy and also a situation with a drop in the rating of Macron against the background of disorders in France are in the center of attention current week. Inflation of the prices of consumers and retails will be the main statistics on the USA; on the Eurozone it should be traced the index of Germany of ZEW and PMI of the industry and services. 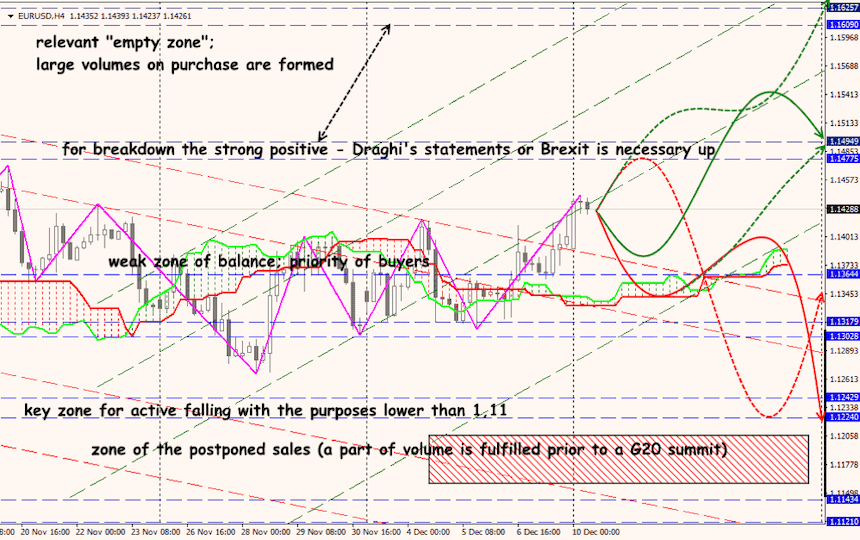 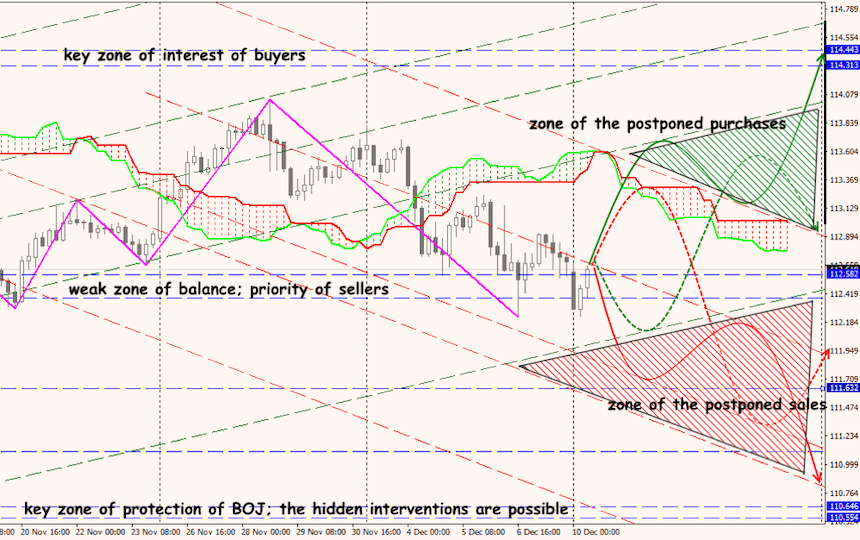