Trump increases activity before intermediate congressional elections in the USA in the fall.

Formation of the coalition government of Italy between parties «5 stars» and North League has become possible after reciprocal concessions, in particular, after Berlusconi's consent to create an office without his participation. At the moment both parties have changed the rhetoric and don't intend to advance the idea of a referendum on an exit of Italy from the EU/eurozone and to the refusal of euro.

Di Maio and Salvini had to report to the president of Italy about results yesterday, there is no final decision on the candidate for the prime minister yet, but the threat of creation of the technical government is almost leveled.

One more delay is quite probable though leaders are ready to report about progress in negotiations. The political, but not technical figure which isn't belonging to one of two political forces will become the general candidate for the prime minister position. We listen carefully to any Italian information, the decision can be announced at any time.

Euro exchange rate was under pressure after a release of data on the slowdown in economic growth in the eurozone, on Friday Draghi has said that the eurozone needs new financial tools which will allow helping to less developed Commonwealth countries which suffer from excessive collectings during the debt crisis. However, the relation of investors to dollar following the results of events of two last weeks has begun to change in a negative side. After a release of weak data on inflation in the USA on Thursday large investors were slightly disappointed in the more aggressive rate of increase in an interest rate and the dollar had to brake. As a result, euro was succeeded to leave from a critical zone 1,18 almost on one and a half figures.

On Wednesday we wait for a performance super Mario on an action, devoted the retirement of Vittorio Constazio, the vice-president of the ECB. Draghi can emphasize that resolute actions of the ECB could prevent a crisis of disintegration of the Eurozone, and further reasonings on this subject will only support intentions of the ECB to close up the QE program this year irrespective of growth rates of economy and inflation.

The rhetoric of BOE, in general, met market expectations, but a decrease in forecasts for GDP growth and inflation has provoked closing of long positions and to the formation of new minima. Now the market waits for an increase in a rate not earlier than November. The new reasons for the decline of the pound after the meeting of BOE haven't appeared. Now the regulator is faced by a task – it needs to convince bond markets and currencies that it isn't going to refuse to toughen, despite uncertainty around the Brexit, weak economic statistics and the growing dollar.

Trump's decision on an exit of the USA from the nuclear agreement with Iran has led to the growth of oil against the background of falling of stocks. Work on the return of sanctions already goes, in 90 days of the Central Bank of Iran won't be able to carry out financial transactions in dollars, and in 180 days the ban concerning the export of oil of Iran will return.

However, the decision of OPEC on quotas at the summit on 22 June will become a major factor for dynamics of oil. Most of the members of OPEC express desire to compensate export volumes from loss of Iran, nevertheless, China and India are ready to continue purchases of the Iranian oil. The preliminary meeting of the countries of OPEK+ before the June summit is expected on 22 May.

Though the European oil refineries and the trading companies have begun to prepare for reduction of purchases of the Iranian oil, rather quiet reaction of the markets is partly caused by a misunderstanding of the mechanism of action of sanctions. Other countries formally remained within the nuclear agreement; the uniform reaction of Europe to a situation isn't developed yet.

Disagreements around the Iranian transaction separate yesterday's allies. Trump and Macron's telephone negotiations on 12 May only complicated a situation. London after Paris and Berlin stated that it will continue to satisfy terms of the agreement with Iran. Germany calls Trump's decision «super catastrophe»: the country is one of the most important trade and economic partners of Tehran in the European Union, at the same time extension of the American sanctions can affect directly the German firms which work in Iran. Leaders of the EU can discuss an output of the USA from the agreement on Iran at summit ЕС−Western Balkans on 16 May in Sofia. The European participants of the nuclear transaction with Iran till 60 days shall provide to Tehran warranties about saving the agreement.

At the same time, the USA after a massive attack of Iran to line items of Israel once again said that «Iran cannot be trusted» and expressed support of the Israeli army in a question of answer actions.

Trump scandals proceed. Last week the special prosecutor Mueller refused to Trump's lawyers obtaining testimonies of the president in writing; if Donald does not agree to oral evidence, he is threatened by an issuance of a summons for witnessing before the grand jury.

Against the background of the forthcoming next round of negotiations China-USA, Beijing was engaged in small-sized blackmail: strengthened checks in ports of production of the USA, delaying shipment of perishable goods that irritates officials and weakens the American line items at negotiations. There is no progress at the moment. The data unit of China in the morning of Tuesday in case of an output below of the forecast can give to escape from risk.

A current week at attention center – the agreement of NAFTA, a deadline on 17 May; if do not agree, then the U. S. Congress will not be able technically to ratify the new agreement until the end of this year. Trump has a choice: either to provide to the partner countries the next concessions or to suffer the first defeat in trade wars.

We pay attention to the retails of the USA, data on a sector of construction, the production index of FRB of Philadelphia; for euro – on inflation of consumer prices, ZEW of Germany and GDP of the Eurozone. Do not forget about the British report on employment. 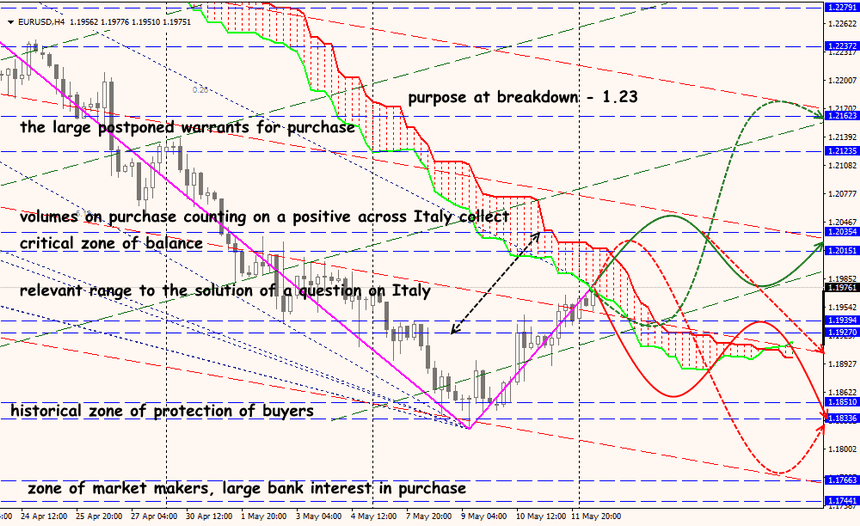 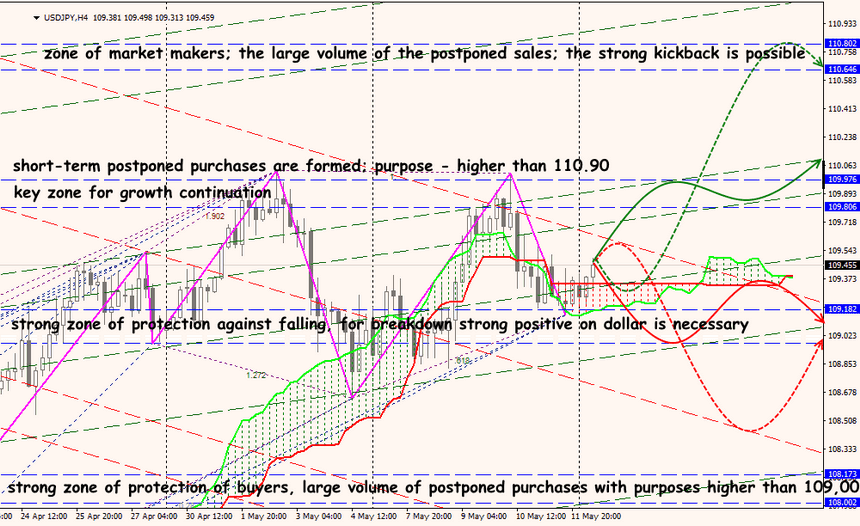