To run or to attack: aggressive dollar looks for allies

The conflict between the USA and China escalates strictly according to the plan. New losses in Trump's team; the indistinctness of Powell`s position was led to escape from risk.

Increase in a rate of FRS has been completely considered by the market, the accompanying statement didn't differ from January, the vote was unanimous. Forecasts of growth are revised in a positive side, the regulator expects more active growth of labor market and economy in general. At the first press conference, Powell tried to be pleasant to Trump very much, but serious concern about the current policy didn't manage to be hidden. The new head of the Federal Reserve was afraid too much of the sharp growth of dollar and profitability of state treasury bills of the USA – as a result, he has the fall of the stock market.

It means that the dollar will continue «to be nervous» on statistical data as it is too dangerous to react to political problems in the current situation. The president has got used to analyze the rating by means of dynamics of share assets, that is long falling simply has to lead to a reconsideration of a situation by Trump. But so far hope for it is weak.

The new shutdown is canceled: Trump has signed the law on the budget of the USA for 2018 financial year − in $1.3 trillion, including $700 billion for defense (it is more for $80 billion than last year). Though the majority of figures in the document the president traditionally remained dissatisfied (reform of immigration rules was not supported and $25 billion for a wall with Mexico haven't given), financing of the government is prolonged till 30 September.

Also, the president has signed the memorandum of trade sanctions for China for the sum of $50 billion; the markets are ready to it, metal duties are postponed prior to the beginning of May for the majority of the countries, including the EU, Canada, Mexico and North Korea. The concession to requirements of the USA will create a precedent which can be more rigidly used further against certain EU countries, first of all, Germany. There is no accurate European position on the matter yet. Negotiations are planned to be completed until the end of April, but at the time of the signing of the decision on duties by Trump, it has been stated that it is «the first document from many» what confirms the worst fears.

The response measures announced by China while looking modestly, the main program of sanctions are only studied. They promise adequate volumes of losses for the American goods (steel pipes, fruit, wine, pork, the processed aluminum). First of all sanctions against the Boeing and a large car business and also the speculative sale of state treasury bills of the USA are considered. PBOC tries to constrain a capital outflow by an increase in short-term rates, but it helps a little. The insider about possible power devaluation of yuan against dollar can be relevant only after the publication of the annual report of the Ministry of Finance of the USA on the countries manipulating the currency.

We will note some more «painful» points:

The pound has got support from the report on the labor market and BOE meetings, market expectations of an increase in a rate in May have exceeded 80%, two increases in the current year are improbable. Inflation and economic growth correspond to February forecasts. Fixing of the agreement on a transition period of Brexit is also treated positively, but uncertainty concerning the sector of financial services doesn't allow pound grow surely. Certification of banks of Britain in the transitional period also questionable.

According to data of the report of CIPS, because of Brexit, every seventh European company (14%) has already brought business and the main part of assets out of Great Britain, 11% of the firms representing EU countries have reduced the personnel. This fact already leads to increase in prices for the British consumers. In due time Carney has said that increase in a rate will become possible at GDP growth not lower than 1,5%, therefore, it is worth tracing the next publication of data on Thursday.

Also, the current week we pay attention to data of the USA on inflation of consumer expenses, to personal expenses/income and also GDP for the 4th quarter. For euro it is necessary to monitor the growth of inflation of the certain countries (for March), figures on the general inflation of the EU will be published on 4 April.

We remind: on the most of trading floors on Thursday – the short working day (it is logical to expect fixation of profit in the evening), and on Friday − day off. 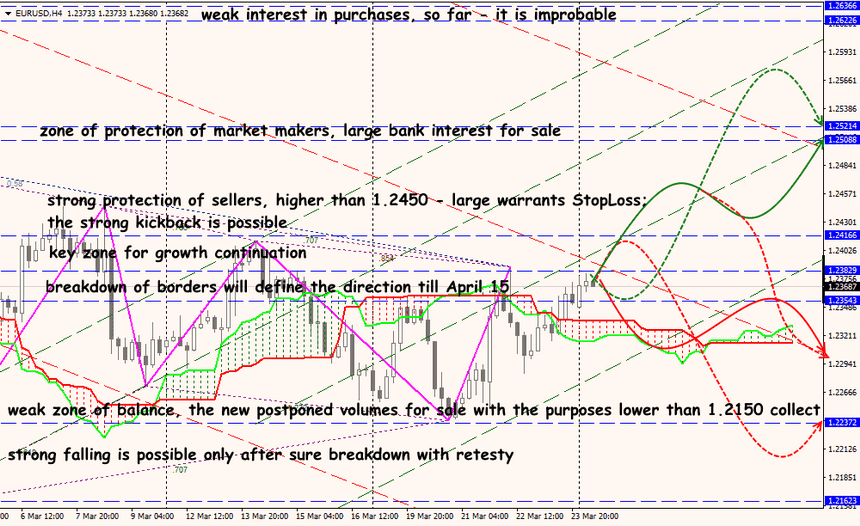 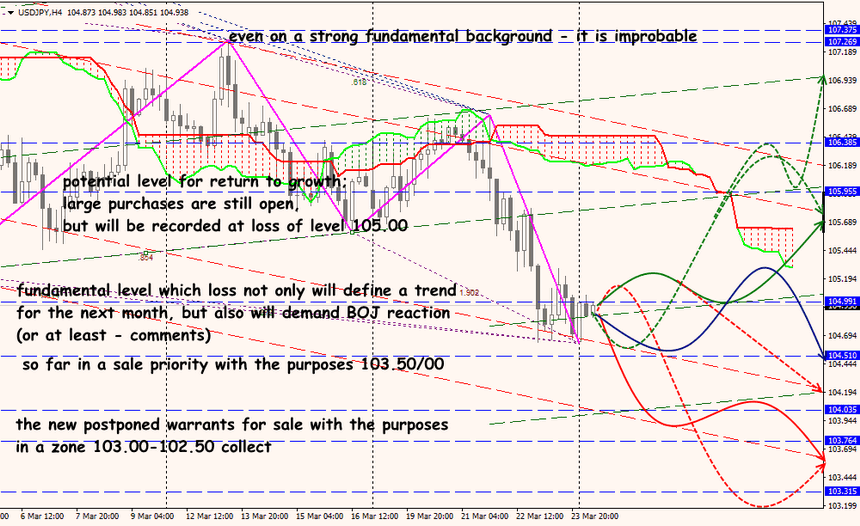