Political risks leave the eurozone to America; investors actively move to the European shares; Macron has won again; the Bank of England has kept a base rate; Brexit on crouch start. Stable, but not less interesting trade week is expected.

Political risks leave the eurozone to America; investors actively move to the European shares; Macron has won again; the Bank of England has kept a base rate; Brexit on crouch start. Stable, but not less interesting trade week is expected.

Along with a base rate, BOE didn't correct the planned volume of repayment of assets (₤435 billion). The meeting was considered transit as wasn't followed by the publication of the updated macroeconomic data and a press conference, but at once three members of the cabinet have voted for an immediate increase in a rate, and the text of the accompanying statement has sharply replaced a tone. Carney's performance has been postponed until Tuesday the current week in connection with the tragedy in London.

Important British data current week aren't planned, the main attention will be concentrated on political events. On Monday long-awaited negotiations on Brexit will begin, any information leakage concerning positions of the parties can lead to the growth of volatility. If after the beginning of Britain and the EU negotiations on Brexit the pound grows − BOE will return to positive rhetoric. The Minister of Finance of Great Britain Philip Hammond intends to try to obtain preservation of membership of the country in the Customs Union of the EU and is going to affect an opposite May`s position on this issue. On Wednesday in newly elected Parliament the legislative agenda of the governments will be stated. The coalition agreement of the government isn't signed yet that puts the descending pressure upon pound, but on the set of factors the pound keeps chances to resume growth and to check for durability of a maximum of May.

The market expected that except an increase in rates, the FRS will provide negative comments about the economy, will revise forecasts for an interest rate, inflation and economic growth. Last time, when the economic statistics has turned out approximately same disappointing as now, Ben Bernanke announced the beginning of the operation «Twist». But everything has gone not so. FRS wasn't ready to the similar delay of economy and inflation, data on June 14 have taken unawares and its unexpected optimism in the statement has supported the growth of dollar exchange rate.

The Federal Reserve has reconsidered natural unemployment rate to 4,6% in comparison with 4,75% earlier, he is confident in the implementation of Trump`s fiscal incentives and tries to affect an advancing. Yellen has shown ingenuity miracles, justifying an increase in a rate: data on inflation of three last months are called the market «noise» based on disposable factors. Nevertheless, investors haven't believed her – data show absolutely other picture and losses of the dollar were limited.

According to the FRS` schedule of normalization of balance, process will begin with monthly reductions in the amount of $10 billion ($6 billion − on the purchases of state treasury bills of the USA and $4 billion on mortgage bonds), every quarter the sum will increase until reaches a maximum of 30 billion and 20 billion dollars respectively. The balance will be considerably reduced in comparison with the current level, but will remain above, than it was before the financial crisis.

The next meeting of FRS – on September 20, chances of the third increase in a rate against the background of contradictory data – are minimum. The draft of tax reform has to be submitted on September 4, that is prior to a meeting the prospects of the start of incentives have to be clear. If salaries don't grow, the labor market will begin slow down, and the economy and inflation won't resume growth: change of rhetoric and forecasts of FRS will be cardinal. Nevertheless, analysts consider that expectations on fiscal incentives of Trump are almost leveled by political problems regarding the investigation of scandal with Comey − Democrats persistently don't want to make a compromise with the administration.

The ECB keeps zero rates and will continue evroQE to 2019, but despite the soft tone of a press conference, the probability of extension of the program of buying up of assets in the 3rd quarter of the current year remains. The IMF has again noted that restoration of the eurozone amplifies and becomes more and more large-scale, but the ECB still couldn't receive steady inflation less than 2%. Streams of the capital are reoriented on the European assets, demand for euro grows. The parliamentary elections of Italy ahead and the ECB intends to reach them with a significant amount of incentives.

Macron's party in the union with loyal Republicans receives an absolute majority in parliament, despite crucially low voter turnout (about 36%). Nevertheless, according to exit polls, his supporters receive about 355-360 places, and this result is lower than expectations. It can be a short-term local negative for euro.

The current week the market will listen carefully performances of FRS members, trying to understand the optimism reasons Yellen and to estimate the number of her supporters. If it turns out that optimism was excessive, the dollar will appear under pressure. There isn't expected important performances of the European Central Bank, but it is impossible to exclude traditional leakage of the insider in media after the intermediate meeting on Wednesday. 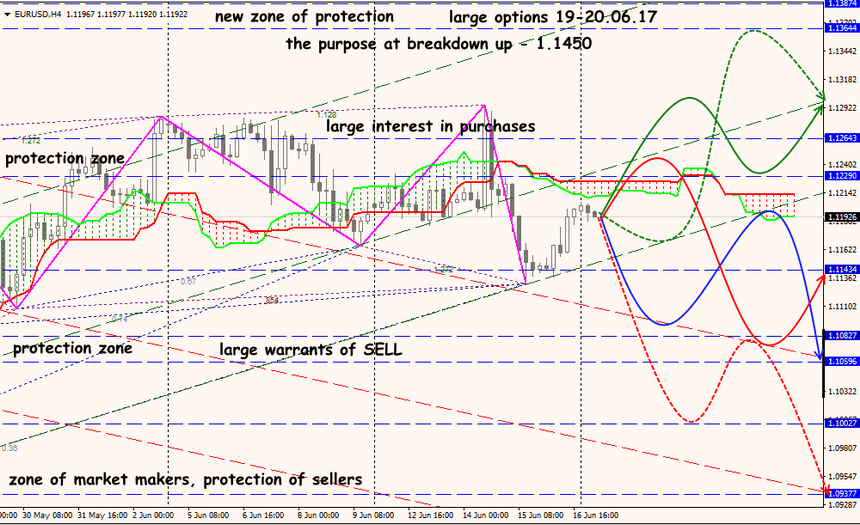 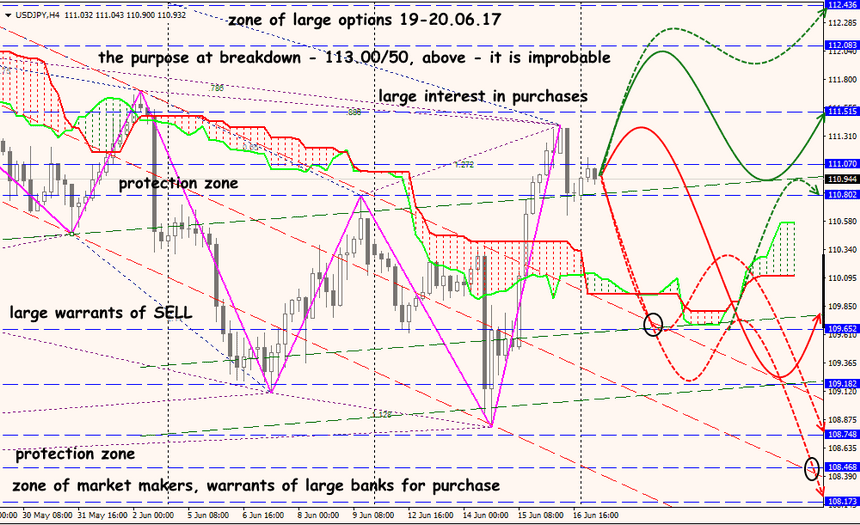