There will be no winners: a fight between the ECB and FRS continues

The market hung up in position wars: euro enters the fight for rates; China prepares for protection against Trump; Britain votes, but solves nothing; the OPEC is nervous and loses influence. But all trading!

Two largest world regulators openly declare perspectives of interest rates reduction and mitigation of a monetary course. Mitigation of policy of FRS will not reduce profitability and trust to the dollar, but synchronous «investment» moods of most the Central Banks already led to the growth of the stock markets, falling of profitability of state treasury bills and falling of inflationary expectations.

Euro fell to a minimum of a day after the statements of the IMF evaluating the European economy as unstable. The Fund doubts the achievement of the forecast of growth of the eurozone against the background of gain of trade strength and uncertainty regarding Brexit. The European regulators are ready to constrain dissenting attempts of America to avoid globalization. The increase of the influence of euro, including by means of more effective payment service providers, will give to the EU more political privileges, will reduce a negative from any American sanctions and will allow Europe to apply such methods.

Draghi's statement means that the ECB who filled up the markets almost for €4 trillion during two rounds of QE does not intend to stop. The Central Bank can use additional incentives if the deterioration in the world economy and political uncertainty refrains GDP growth and inflations in the region.

On June 20-21 it is necessary to approve applicants to the key posts of the EU, to finally issue decisions on the budget and to develop tactics before contacts with Trump on a G20 summit. The Brexit topic is also in the focus. The reaction of the market has to be on information on new heads of the ECB and European Commission.

German Weber in European Commission will be a negative for Italy, but then the post of the head of the ECB will be held by the representative of France or Finland with which it will be simpler to Rome to reach understanding. The rhetoric by the matter mainly will determine the probability of early elections to the parliament of Italy this year.

The most problem option for euro – Villeroy as the head of the ECB: in the anamnesis at this applicant lack of rigid character and complete dependence from Merkel. Other candidates are more or less similar, their appointment will lead to the growth of the euro.

On Wednesday FRS will keep rates invariable, but the market will react to new forecasts and Powell's rhetoric. Any unreasonable step will bring down the stock and debt market of the USA, having caused a domino effect worldwide. The Federal Reserve System does not deny the possibility of a decrease in rates for the maintenance of growth of the economy of the USA, but at the current stage is obviously not ready to such step.

FRS is ready to tie the policy to trade wars, but the instruction on the shift of balance of risks for prospects in the descending direction can become a not less strong method to report to the markets about intentions. Dot forecasts of members of FRS for rates will be a hit of the current meeting. Economic forecasts also matter, but it is not so important as the economy of the USA shows rather strong growth.

In a situation of a failure of negotiations of Trump and Xi Jinping on a G20 summit, FRS will be forced to reduce rates promptly. At trade truce and a positive of negotiations, a decrease in a rate in July is improbable. We wait for the main reaction after the first portion of information (at 20CET) as Powell's comments can be traditionally muffled.

The British companies began to increase actively stocks in hope that the political haze will be dissipated shortly that promoted acceleration of GDP up to 0.5% of apartment/apartment in the first quarter.

The pound is still indifferent to results of the first vote. Johnson received 114 of possible 330 voices and his opponents had an idea to unite resources of centrists for at least externally decent opposition.

Experts of Bloomberg estimate chances of opponents of compromise from the EU (Johnson or Raab) on the prime minister's post in 70%. In this situation, the pound will fail to 1.24, but the parliament will not allow chaotic Brexit, and restoration in zone 1.300-1.3150 will take place quickly enough.

BoE meeting on Thursday is not of particular interest, the decision on rate will be made after clearing of the situation with Brexit so till the result of the final round of vote during the week since July 22 there should not be special shocks. From economic data, it is of interest the report on inflation on Wednesday and retails on Thursday.

Growth of industrial production of China has not met expectations (5.0% of you instead of 5.4%), but retails for May have grown (8.6%). It is of interest what was bought by the Chinese consumers if the drop in sales of cars for May is 16.4%, but the total costs of purchases have significantly grown?

China does not aggravate the situation but also does not surrender. According to statements of the Deputy Prime Minister Liu He, Beijing uses hard times to create innovative supply chains and the strong capital markets and puts internal consumption in priority. 73% of experts of the Wall Street Journal do not expect that long-term benefits from protectionism will manage to compensate for the economy of the USA short-term damage.

Trump says that all terms of the decision «an issue with China are only in his (Trump) head». The transaction will be either «magnificent», or it will not be at all, but Donald already promised new duties if Xi Jinping does not arrive at a G20 summit, or will avoid in general active contacts.

If Trump and Xi's meeting is successful and the parties will return to the negotiating table with the cancellation of the duties introduced in May, then decrease in a rate of FRS is not required, but such positive scenario is improbable, considering demands of Trump and rhetoric of China. So we listen carefully to all front reports.

Current week we pay attention to data of the USA on the sector of construction, PMI of the industry and services; regarding the Eurozone − PMI of the industry and services, the ZEW index of Germany, inflation of the prices of consumers of the Eurozone for May. Statistics of China prior to a G20 summit has no impact on yuan, panic and an exchange rate above mark 7.0 are possible only at a negative from the front of a trade war.

In FRS the silence period, the activity of comments after the press conference will correct Powell's errors or will try to level negative reaction of the market.

The forum of the ECB works on June 17-19, Draghi will daily act, but the availability of the text of a performance Draghi is promised only on Tuesday. The performances closed from media are not excluded.

After the attack on two tankers at the Strait of Hormuz, the armed opposition with Iran seems inevitable and the dynamics of oil also depends now on the decision of FRS. The decrease in oil production of OPEC reached a maximum, but the growth of stocks signals about the delay of the world economy. Not the summit of OPEC, but negotiations China-USA will become the main driver. 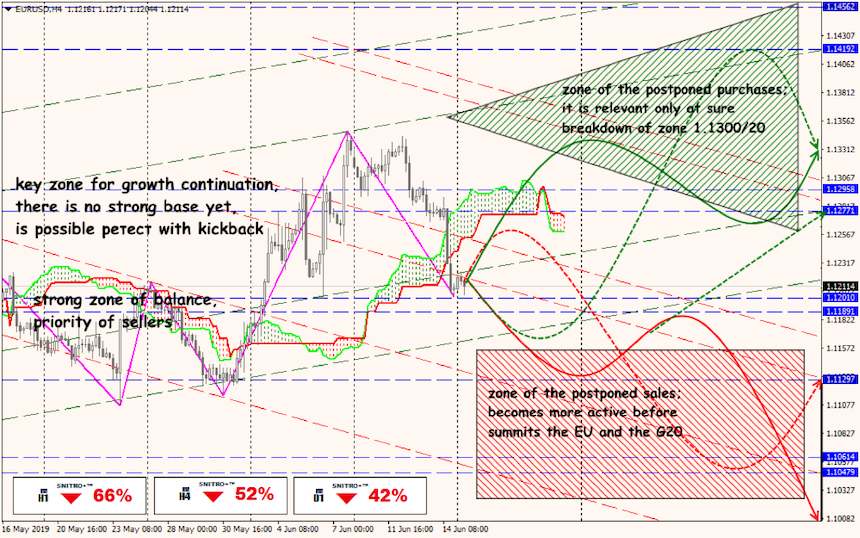 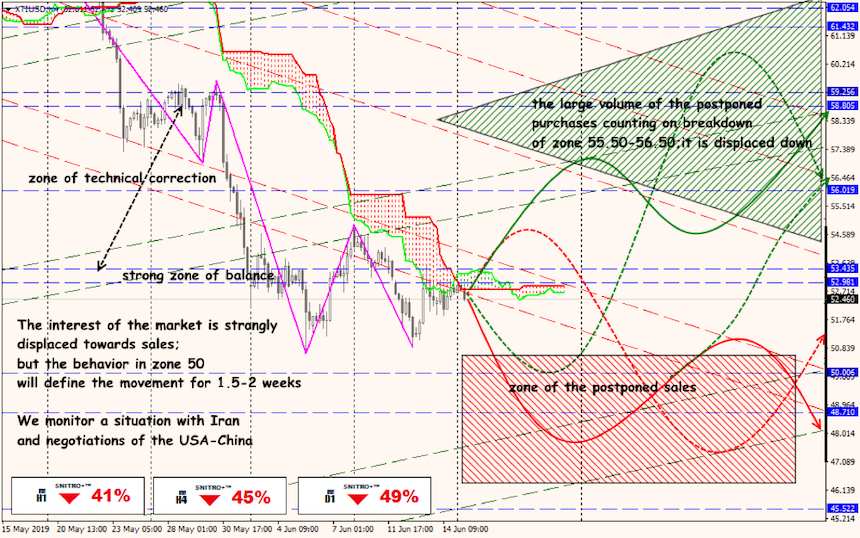