There's a time for all things: last chance of the expiring year

The Central Banks have kept the status quo; Brexit has succeeded to the second round.

Merkel hopes to create the coalition, Catalonia − to vote, and Trump - to receive tax reform as a gift for Christmas. We prepare for holidays, but we don't lose attention.

FRS has raised a rate; the accompanying statement became more optimistical concerning labor market; forecasts for GDP growth are raised, forecasts for inflation remained invariable since 2018, and on the growth of the general inflation for 2017 are revised on increase. Everything is quite positive, but! the dollar has considerably fallen.

Weaker inflation published prior to a meeting, a problem with tax reform, but generally - Yellen became the reason for that. Change of rhetoric (though the lady was slightly confused in indications) needs to be considered an original gift to her successor Powell who is inclined to show bigger concern about dynamics of the stock market. The main message was clear: don't wait from FRS of sharp changes after acceptance of Trump`s reform.

Acting following the results of the EU summit, Merkel has said that she is ready to agree with France concerning the reform of the eurozone. Internal German problems aren't solved yet: the leader of SDP Schultz has said that consent to the beginning of negotiations by Merkel's block doesn't mean automatic consent to the creation of the coalition. Officially negotiations will begin in January that leaves euro under the descending pressure, but the statements of leaders of parties of Germany exert an impact on assets of the Eurozone and Britain. Execution of any arrangements to a beginning of the year is minimum.

The start is given to the second stage of Brexit: the new round of debates will capture questions of trade relations between Britain and other countries of the block. Europe reminds that the promises made by Great Britain are obligatory to performance, and require official written approval. However, the prime minister confirms that Britain after the end of a transition period will quit the system of the uniform market of the EU and the European Customs union.

During vote for amendments to the law on Brexit according to which the agreement on an exit has to be approved at first by Parliament a part of Conservatives opposed the Prime minister, and the scandalous changes limiting May's actions after all were accepted. The pound reacted too nervously and wasn't restored yet.

Now even in the case of achievement of any result, the Prime minister should get the approval of Parliament, however, the EU won't reconsider terms of the transaction if it isn't pleasant to the British deputies. According to what scenario the divorce will go further - the House of Commons solves.

May had to refuse legislative fixing of the final term of an exit from the EU, but was stated that Britain will try to obtain "the best and ambitious" transaction. Today May makes the report before the House of Commons -we read comments attentively, the tonality of discussion will have an influence on the pound.

The rhetoric of a BOE`s meeting was reserved, despite economic data is better than the forecast. From economic data current week it is worth paying attention to the publication of GDP on Friday.

The statistics of the current week won't press on the market, the economy of the USA grows, tax reform anyway will accelerate growth therefore now even failure data of the USA will have short-term influence.

Investors were nervous considerably after the Republican has lost to the candidate of Democrats on elections in Alabama, but so far everything goes according to the plan − Republicans of both chambers have reached consent on tax reform. All "problem" voices have chosen a position pro, acceptance of tax reform - an excellent positive for dollar taking into account the end of the year. The final decision is planned to be issued till Thursday.

Only activation of investigation of Mueller can spoil the mood. Democrats hope that Trump will dismiss Mueller next week on the Christmas eve, i.e. will make an action which will repeatedly enhance chances of an impeachment. Mueller's dismissal will lead to escape from risk and decline of the dollar against funding currencies.

The working meeting of the ECB hasn't added of the drive to the market, but the expectation of growth of inflation for 1,7% in 2020 has led to euro turn down. Draghi has acted in the traditional style of denial, but in general - optimistically. As the new, lower volume of QE hasn't begun yet, the ECB wants, at least, to look what will happen from this. The descending pressure upon euro will remain prior to parliamentary elections of Italy on 4 March 2018.

The current week finishes year, falling of liquidity is expected already to the closing of the auction on Thursday. The main data of the USA will become inflation of consumer expenses, the statistic of personal income / expenses, on the Eurozone it is necessary to monitor inflation for November and the IFO index of Germany. The activity of members of all of the Central Banks is improbable, planned speeches of heads of the Federal Reserve and the ECB aren't expected though comments are expected much. However, key persons will have to wish all pleasant Christmas and to limit poison percent in the messages. 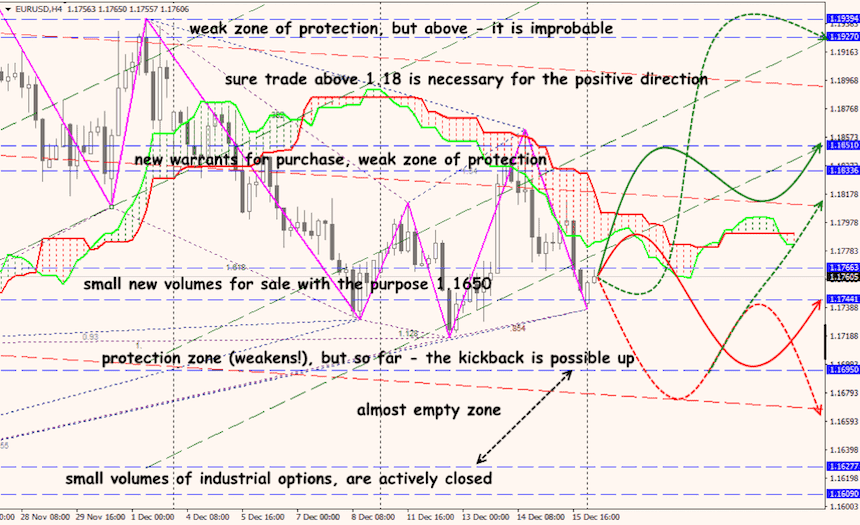 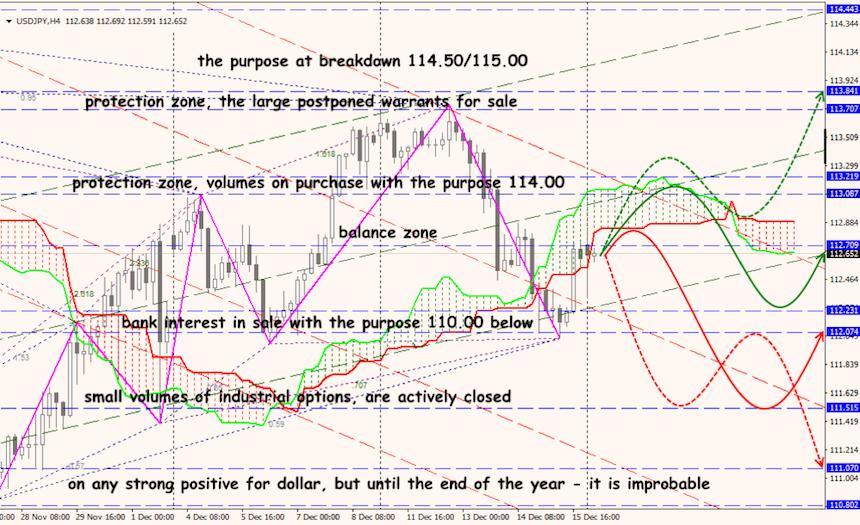