The problem of North Korea remains the main short-term fear of the market, but hurricanes, a disgusting macrostatistics.

A new ceiling of a national debt and Gary Cohn struck off the candidate list on a post of the head of FRS tried to darken fear of the Korean hydrogen bomb.

Fears of new nuclear tests by North Korea restricted appetite of investors to risk and led to falling of profitability of state treasury bills of the USA and growth of gold. Trump is ready to spoil the relations with China because of the Korean crisis and to give a start to trade and real war. The meeting of the UN Security Council on sanctions in the relation North Korea initiated by the American side will take place on September 11, the European Union prepares own sanctions against DPRK, in particular, closing of the European ports for stopping of North Korean vessels and arresting of assets of Kim Jong-un in the EU that will close for him a possibility of any relocation − financial and physical. Acceptance of specific decisions of the UN will calm the markets and will stop the panic.

In spite of the fact that the category of the hurricane «Irma» has been lowered with maximum the 5th to the 4th, consequences are expected catastrophic, considering a strong earthquake in Mexico, with not absolutely clear consequences so far. The agency of the state insurance of France has already assessed damages from Irma in the French territories in the Caribbean Sea approximately at €1.2 billion.

All statistics on oil has been ignored by the market: if the hurricane «Harvey» has struck the offer, then Irma and, after it, José act as the decrease in demand catalyst so far. There is no special threat for oil infrastructure, affected by Harvey, but investors are disturbed that increased a margin of an oil refinery which seek to use a situation now and increase oil purchases, it can quickly be reduced − most of all gasoline is consumed in Florida, more than in any other state of the USA.

Speculators tried to buy up euro in response to positive forecasts of economic growth, but Draghi already traditionally has told nothing in favor of euro, has used the best efforts for a turndown, but is ineffectual. Tranquility superMario – a usual external mask, it is possible to guess furious fights proceeding in the ECB based on speeches of heads of the Central Bank of the northern countries, in particular – Bundesbank. So far technically growth of euro has a weak connection with what was told by Draghi − large players have no intentions on the strong growth of euro above a mark 1.20. Following the results of a meeting of the ECB, briefly:

The market has ignored interrogation of the Trump`s son by a committee of the Senate on the investigation, the beginning of the investigation in relation to China, problems in negotiations on NAFTA and has focused on natural disasters. The Senate prepares one more attempt on correction ObamaCare, but there are no voices for ratification yet. The skepticism of the markets concerning the third increase in a rate of FRS until the end of the year increases especially as the statistics have given dangerous news on labor market − the number of primary requests for a dole has sharply flown up as territories near Houston practically don't function.

Dollar has cheered up after adoption on Friday of the law on increase in a limit of a national debt and granting $15.25 billion for mitigation of consequences of hurricanes, thereby work of the current government is financed, at least, till December 8. In FRS the silence period before a meeting has begun on September 20.

The deputy head of FRS Stanley Fischer retires ahead of schedule (for the personal reasons) that adds the uncertainty of the future monetary and credit policy. Trump will surely try to push on this vacancy more reactionary figure. Chances of appointment of Cohn gradually decrease that potentially to increase a possibility of the second term for madam Yellen. According to Bloomberg, 6 candidacies are considered for a position so far.

Trump's appetite to money and reforms continues to grow. Rates of a corporate tax in the USA are the highest in the world (in some states − 39%), and therefore the American companies have multi-trillion stocks of dollars out of the USA. And it is the biggest reserve of cash in the world. The president wants to return back them to the American economy − the White House prepares certain «compulsory» measures (as a part of notorious tax reform). They will be much tougher than former attempts to entice foreign money promises of tax holidays. If the mechanism gets into gear, then huge volumes of the repatriated capital flows will blow up Wall Street and all global financial system as the most part of such cash it is necessary to convert into dollar at first.

Production in Britain has grown for the first time this year, investors actively closed short positions, as a result, the pound has risen to a five-week maximum. However, in the nearest future, considerable problems are coming him against euro after the British parliament returns since vacation. The pound grows before BoE meeting on September 14 counting on the preservation of hawk rhetoric concerning increase in a rate. The lack of unity in the Parliament of Britain on cancellation of laws of the EU also leads to the growth of pound, the vote is expected on Monday. Britain expects to stop free movement with the EU at once after the Brexit and to close access to jobs to all inhabitants of the EU, except highly qualified specialists.

The current week it is worth tracing the report of the USA on inflation and data of PPI, decisions on monetary policy of BOE and SNB, data on the industrial output of China, fans of Asian assets we advise don't miss the report on employment of Australia. On the Eurozone, it is necessary to trace final assessment of growth of inflation in Germany. On the ECB it is necessary to expect a flow of «insiders» as tests of the current market. Also, we recommend monitoring news in relation to the tax reform and the conflict with North Korea. 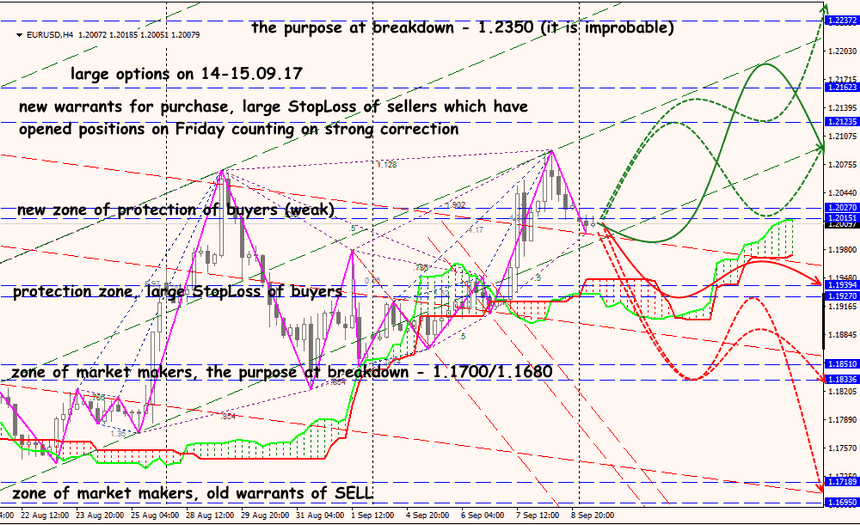 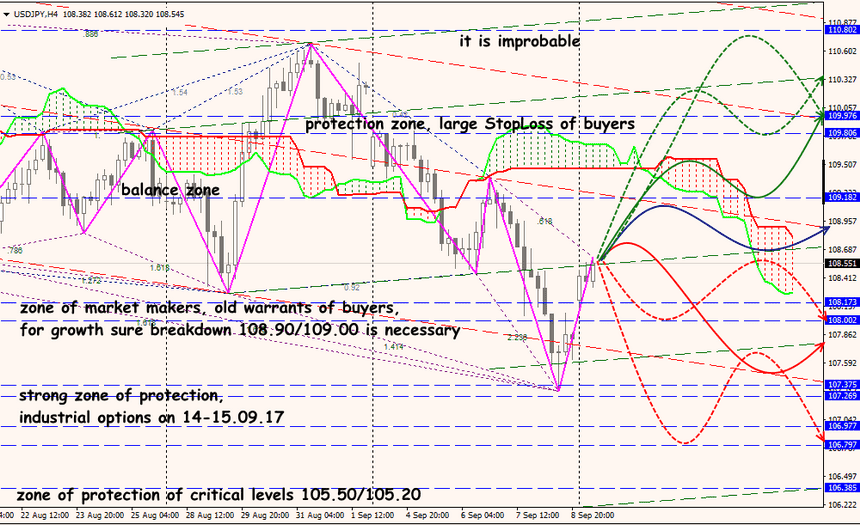